Why do some planets have rings?

Some planets, specifically Jupiter, Saturn, Uranus, and Neptune in our solar system, have planetary rings. 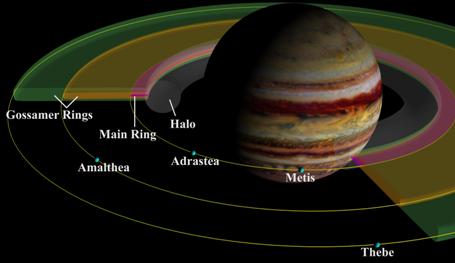 Why do some planets have rings? How are they made and from what? Most importantly, will I be able to observe the rings on any planet with an amateur telescope?

Rings are made up of tiny (and not so tiny) pieces of rock and ice that are in some way the bits "left over" from the formation of the planet. The theory involves the Roche limit - and is that particles that are already within this limit can't accrete into a larger body because of the tidal forces involved.

Another theory is that they are formed when a moon comes closer to a planet than the Roche limit, the tidal forces cause it to break up and form a ring. Though the presence of "shepherd" moons in the rings of Saturn does hint that this may not be major source of material.

Both explanations, to me, imply that you'd only get major ring systems around larger (gas giant) planets, though it doesn't preclude rings around smaller (rocky) planets. This seems to be borne out by our solar system where the gas giants have rings whereas the rocky planets don't.

As to being able to see them, you should be able to see the rings of Saturn with an amateur telescope which has a 50 - 100 powers of magnification. With binoculars you'll probably see a misshapen blob.

9
What's special about Saturn that it has distinctive rings?
4
Why are gas giants colored the way they are?
9
Why does Saturn have both moons and rings?
7
Why are some universal entities round and others are flat?
9
Why Only Saturn Has Visible Rings
15
Why does Neptune only have one major moon?
4
What is the difference between a moon and a random chunk in the rings
7
Why was Neptune rather than Uranus chosen as an archetype?
0
Will the planets be pushed outwards when the sun goes red giant?
8
How am I supposed to locate the planets Uranus and Neptune with a 70 mm f/5.7 refractor?