How was Cruithne's orbital time calculated?

How was it determined that Cruithne takes 770 years to complete its cycle with Earth? Janus and Epimetheus were disovered long enough ago, and have short enough cycle times, that we've had time to directly observe their 8 year cycle more than 6 times over. But Cruithne was only discovered 30-ish years ago, so certainly it's cycle time wasn't determined by simple observation.

So what method was used to arrive at this 770 year number?

It's a good question!

I went to the JPL Horizons web page and looked up 3753 Cruithne and saw that the current orbital solution is based on observations from 1973 to 2018, about 45 years. That's a fraction of an orbit, but very careful measurements of it's position on the celestial sphere (RA, Dec) over time will allow astronomers to calculate its position and speed by fitting those observations to many possible trajectories and finding the one that's the best fit.

The orbit is elliptical but has a nearly-identical semimajor axis as Earth, so it's period around the Sun is one year just like Earth. That means that it in 45 years it has been possible to observe about 45 orbits around the Sun, allowing astronomers to nail down its orbit with great precision.

I plotted the distance from Earth to Cruithne from 1973 to 2018 below from the Horizons data. At a half of an AU and 0.1 arcsec astrometric position precision (averaging over many observation) that gives the position to tens of kilometers over a span of decades.

Then using accurate orbital modeling using the gravity of all the solar system's bodies as described here it is possible to project the position with great accuracy, as long as non-gravitational forces like unpredictable outgassing aren't too strong, and predictable non-gravitational forces like solar radiation pressure can be modeled as described here. 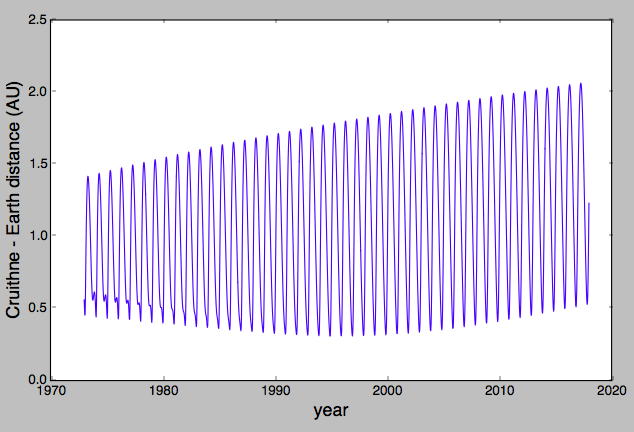 Over time the orientation of the elliptical orbit slowly precesses around the Sun due to the gravitational effects of Earth. This is the ~770 year period you've mentioned.

In the video Near-Earth Asteroid 3753 Cruithne they hold the position of the Earth fixed and you can see how Cruithne's orbit sloshes back and forth.

This GIF is too large to embed here, but it demonstrates the sloshing nicely: https://en.wikipedia.org/wiki/File:Animation_of_3753_Cruithne_orbit.gif

Not the answer you're looking for? Browse other questions tagged orbit natural-satellites orbital-mechanics celestial-mechanics or ask your own question.

3
Do orbital resonances always form naturally?
2
On orbital mechanics of evaporating planets
5
How far from the Sun can an Earth TCO (temporarily captured orbiter) go after leaving?
5
What variables are needed to calculate simple horseshoe orbit times?
1
How to find the Orbital Period of two Binary Planets around a Single Star?
23
When did people first measure that the Earth was closest to the Sun during January?
4
What is the orbital velocity of Pluto around the Pluto-Charon barycenter?
5
Was Newton the first to mention the orbital barycenter?