Which is the farthest distance a particular distant known- identified object from the asteroid belt can get from the sun?

The Asteroid Belt is located in an area of space between the orbits of Mars and Jupiter. That places it between 2.2 and 3.2 astronomical units (AU) from the Sun

But asteroids from the asteroid Velt like Pallas and Hygiea have an aphelion of 3.4119 AU and 3.5024 AU respectively. So my question is, which is the farthest distance a particular distant known-identified object from the asteroid belt can get from the sun?

Updated since the question might seem unclear. I'm asking for a currently known object from the asteroid belt which gets closer to Jupiter.

tl;dr: The key part the question is the phrase

There are lots of asteroids and only some of them are considered to be in "the asteroid belt" or to be main-belt asteroids. As @zephyr's answer to the question Do astronomers generally agree that the distinction between comets and astroids is not so clear? points out, even the definition of what is or isn't an asteroid is under debate and review. To the question of which is the farthest a main belt asteroid can get from the Sun, the answer depends on exactly how you draw your line.

There are also families and groups of asteroids, and while these have visually clear clumps and clusters when plotted in certain ways, they may not have absolute universally accepted definitions of who's in and who's out.

See this and this for some families within the main belt.

While the OP"s link says

The Asteroid Belt is located in an area of space between the orbits of Mars and Jupiter. That places it between 2.2 and 3.2 astronomical units (AU) from the Sun. The belt is about 1 AU thick.

repeat, "roughly" and it goes on to say

The asteroid belt is also termed the main asteroid belt or main belt to distinguish it from other asteroid populations in the Solar System such as near-Earth asteroids and trojan asteroids.

The article also includes the figure shown below, showing that there are plenty of other groups of asteroids besides those designated as "main belt". I am not sure if there is a 100% absolutely IAU-official definition that you can apply to any set of orbital parameters that will return Yes or No to the question "is this one main belt?" but in general it looks like asteroids with a semimajor axis beyond 3.3 AU, or a high eccentricity, or a high inclination would not be called "main belt" by most astronomers.

As @PM2Ring points out Kirkwood Gaps delineate statistical sub-groupings of the main belt.

A Kirkwood gap is a gap or dip in the distribution of the semi-major axes (or equivalently of the orbital periods) of the orbits of main-belt asteroids. They correspond to the locations of orbital resonances with Jupiter.

You can see that while there is a minimum around 3.3 AU due to the 2:1 resonance, there are "green" stragglers extending to the right that continue on past the arbitrary 3.5 AU edge of this plot of "main belt asteroids". 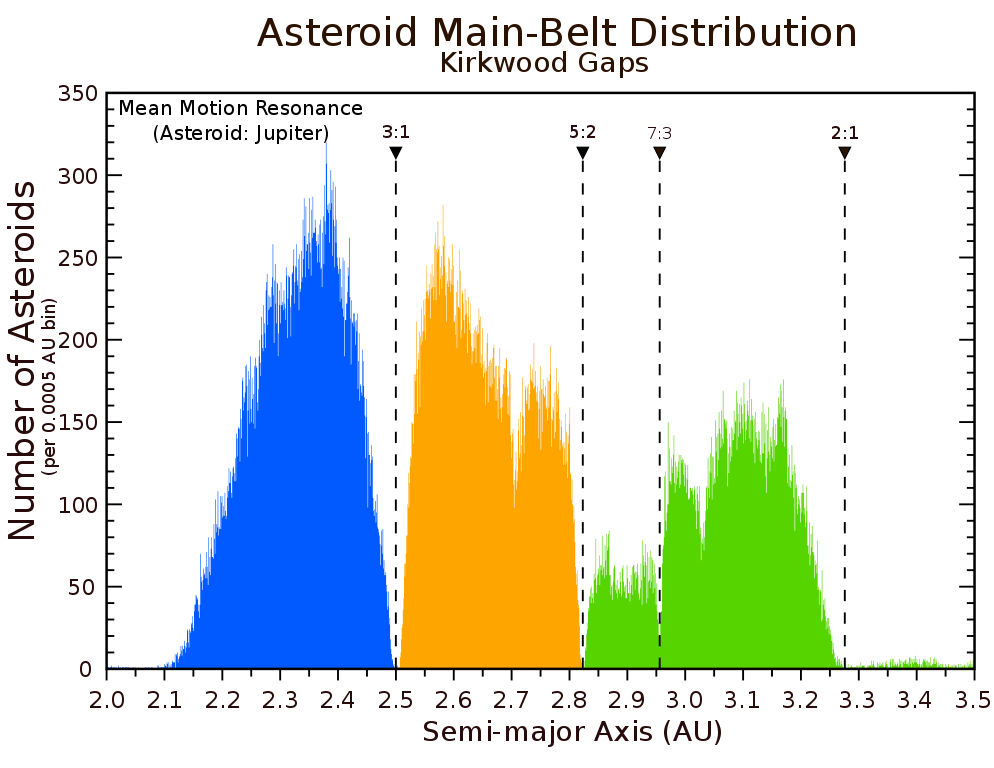 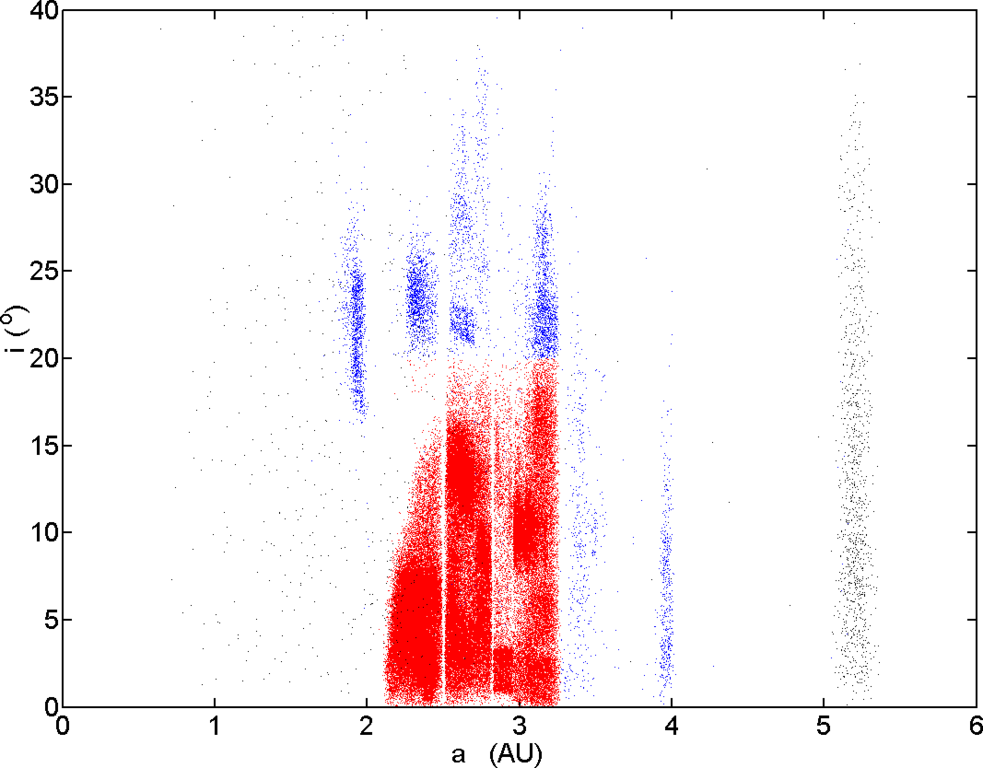 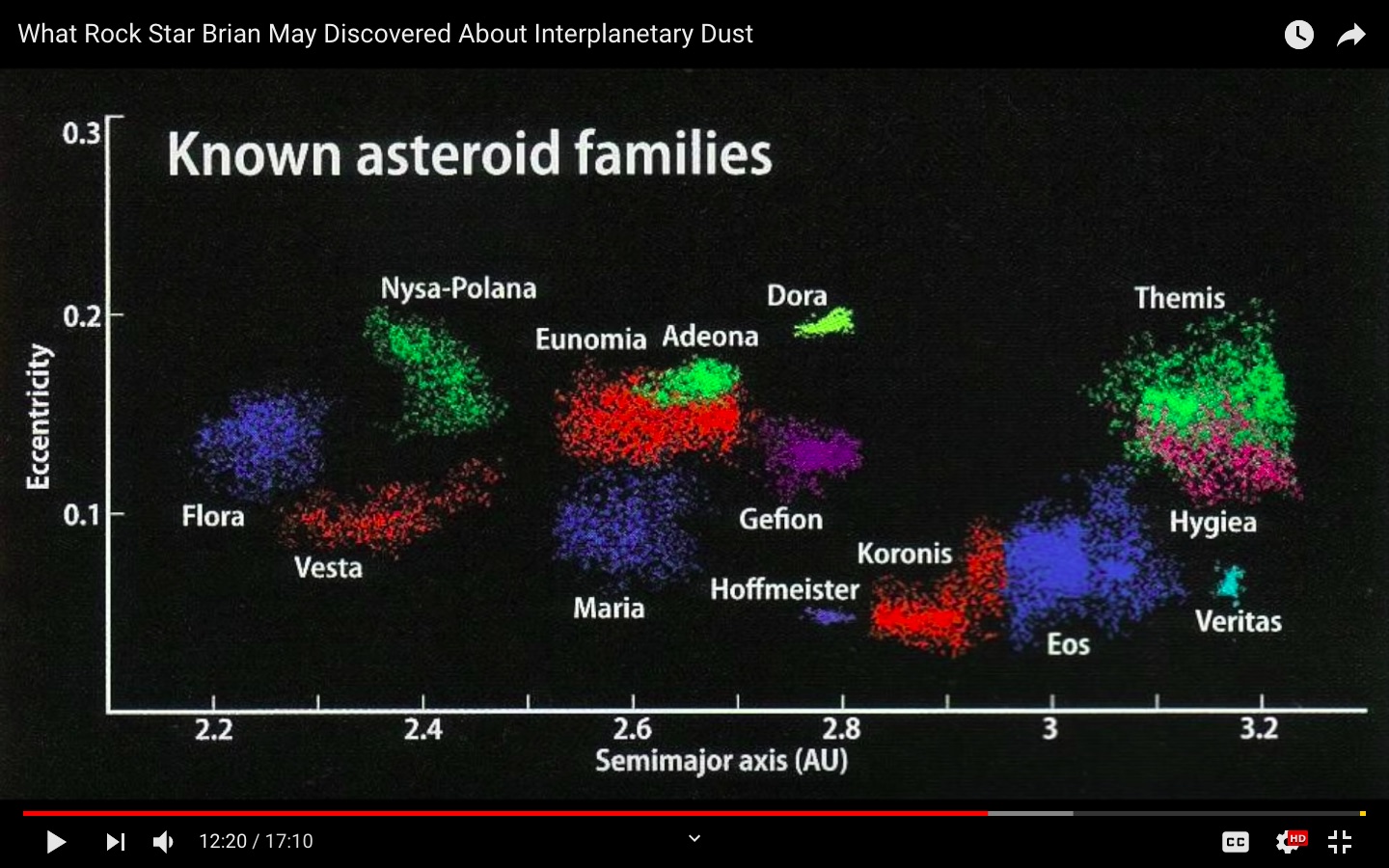 which gives a better idea that there are groups and stragglers than the image in the OP's link: 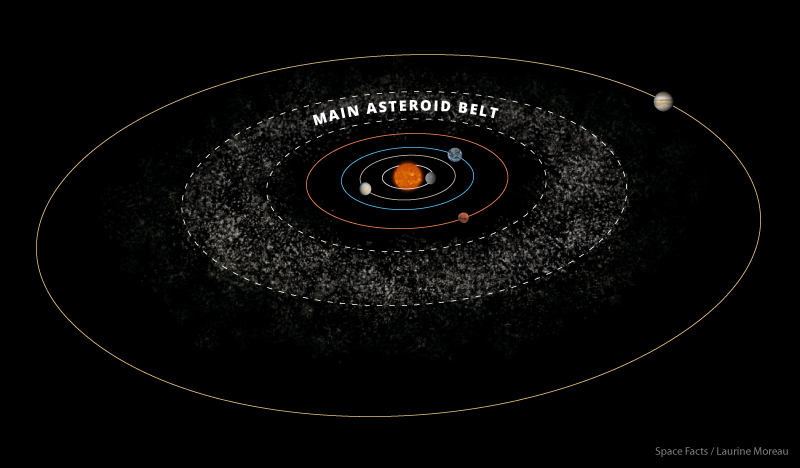 Not the answer you're looking for? Browse other questions tagged asteroid-belt .

9
Do astronomers generally agree that the distinction between comets and asteroids is not so clear?
4
Explanation of resonance stability and instability