What's going on in this photo of Halley's comet's tail?

When researching for this answer I was looking at Space.com's 2011 article Photos of Halley's Comet Through History

I saw the image below, and read the caption. 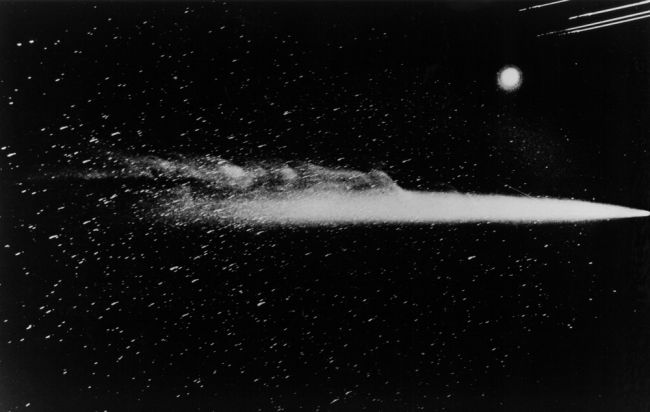 Halley's Comet as photographed May 13, 1910, by a wide-angle camera at Lowell Observatory, Flagstaff, Ariz., during the comet's last appearance. A streak across the comet near the coma is a meteor trail, and not a scratch on the negative. Streaks at the bottom right are the city lights of Flagstaff Bright spot above the city lights is the planet Venus.

I know that 109 years ago astrophotography wasn't what is is today, but the combination of the overexposed venus, the coincident meteor trails, the non-uniform star trails blending in with the comet's tail breakup along with the unlikely looking "smoke trail" from the upper side of the comet's tail make this photo look quite unusual.

Question: What's going on with that second tail thing above the main tail? The shape looks so unnatural, it seems to have a parallel extent rather than radiate from the coma. What caused this?

"bonus points" for identifying the photo in some catalog, or in a publication.

Negatives taken with various intstruments at Lowell Observatory on the morning of 1910-05-13 appear in a 1981 conference paper by Henry L Giclas. The wide-angle images were taken with cameras piggyback on a telescope tracking the comet nucleus. These exposures are naturally deeper in the center than at the edges; modern astrophotographers take flat fields to correct for this. The stars in the upper right of the image in question were low enough to the horizon to be obscured for part of the exposure, making their trails shorter. To make this more intuitive, rotate the image so that the tail points to the right and upward.

The 1910 image in question may show a tail disconnection event in progress. If so, the highlighted feature is the old plasma tail drifting away from the nucleus, and the new plasma tail is not yet large enough to be distinct. Barnard 1914 includes three photos of such an event on June 6-7, 1910.

Not the answer you're looking for? Browse other questions tagged photography comets or ask your own question.

8
What is the direction of a comet's dust tail before and after perihelion?
16
What is the object in this photo?
6
What's the estimated remaining life of Halley's Comet?
3
What causes the bright white area in this photo of the earth?
2
What's this red stuff in some astronomical photos, e.g. Centaurus A?
8
What's the white glow around this star?
21
Does this smartphone photo show Mars just below the Sun?
17
Which are stars and which are noise in this comet photo?
3
What comet's tail did Earth pass through before Halley's?