Could there be additional Neptunian satellites between Larissa and Hippocamp?

Plotting the moons of Neptune in terms of semimajor axis and eccentricity using the values given on the Wikipedia page for the moons of Neptune, there appears to be a fairly large gap between the orbits of Larissa and the newly-named satellite Hippocamp. 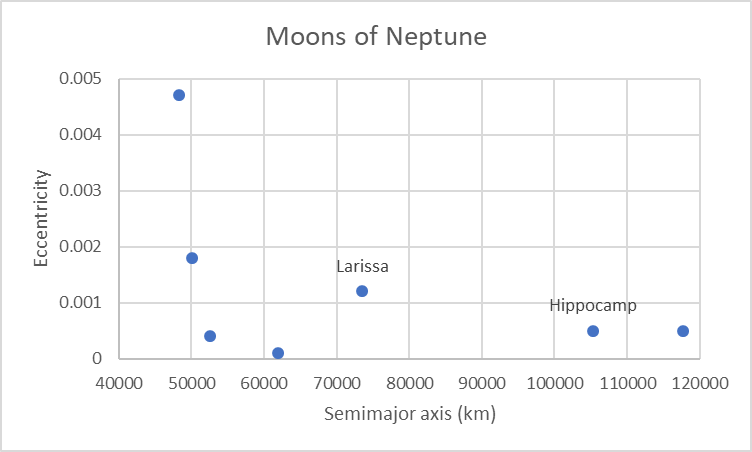 Are there stable orbits within the gap, and are there likely to be additional moons there? 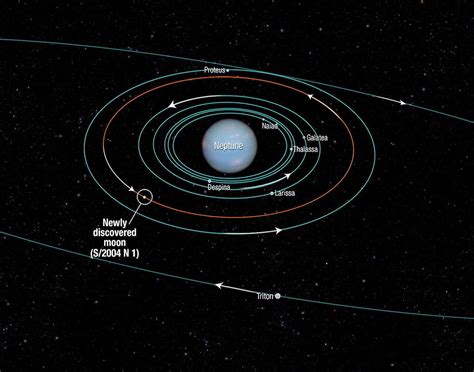 First off, I would assume eccentricity has little function into the investigation because why would it be a moon when it can escape Neptune's gravity?[assuming you mean Neptunian eccentricity] I mean, unless you are thinking about a moon escaping?

Now, let's move onto the distances. You notice when you graph the moons that there is a considerable gap in distance between S/2004 N 1 and Larissa. I believe, after checking this on multiple sites, that there is indeed such a gap.

First, let's take a look at one of the most accepted theories on Neptune and its moons. It is well known that Neptune is very close to the Kuiper Belt. In the Kuiper belt, there are objects like Pluto in orbit around the Sun. Well, Neptune having a very strong gravitational pull would actually yank objects out of orbit into its orbit. Most people believe that this is what happened with Triton. Making up more than 80% of the mass of all of Neptune's Moons, if would have wreaked havoc on the then stable orbits of its original moons.

This consequently could have cause many moons that were large[relatively speaking] to gain/lose eccentricity which would have cause some to spiral inside of the Roche Limit of Neptune ultimately causing the formation of several rings around Neptune. However, in the case of Saturn, we see moons inside of the Roche limit, so we can also deduce that the Roche limit of a planet varies on how massive/large an object is.

We can now conclude that almost all of Neptune's current moons and their orbits are not its original ones. To answer your question, we look at the three body problem. I am not a physicist to I don't know much on the relative equations for the three body system to calculate the exact orbits of possible moons or calculate proof why there isn't a moon. However, I will give you a relative, not full equation blast, explanation.

The three body system states that in long term, the three body problem may lead to either and for the most part, stabilization of the orbits of moons around a planet or, for some period ratios, be the cause of the chaotic motions.

In Neptune's case, Triton introduction has cause for a short period, chaotic motions, which then stabilized into new stable orbits. 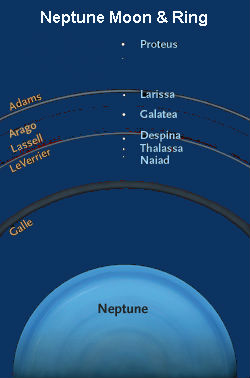 In the image here, it shows the relative orbits of stable moons and Neptune's rings. We can conclude that the respective Roche limit of Neptune would cause any possibly try of ring matter collapsing into a moon to be foiled if the mass was too high. This means that only small moons form between rings Adams and Galle, with Galle marking the "will tear anything apart no matter the size" Roche limit.

Moons between the gaps

There can be many moons there in the gaps between the rings, as long as the moon is small enough to fit, and its gravity is not influencing the rings so much that it is noticeable, most likely very small to be picked up by our telescopes. It brings up another problem: How small must a moon be to be no longer a moon?

There isn't a restriction. However, the most widely accepted one is that a moon is an object with a relatively clear orbit[little debris]. We can say that there may be many moons between the rings, but are too small to be detected.

Moons in the large gap you notice

Now moving on, we have a gap between Larissa and Proteus / S/2004 N 1. Clearly, no rings call this area a home. So this gap is somehow mysteriously "uninhabited".

I doubt that there isn't a "moon" there, even if it were really small. Hippocamp is a very small object. In fact, it is the smallest moon discovered around Neptune. The relative Roche limit is not here, so it probably is possible for ring material to recondense into a moon with a stable orbit, and many times, a moon might happen to be covered up when we search. As I said, there is no size limit to a moon, so, because this area is clear of debris, there might be quite a few that we can't find.

A possible scenario [saying that there are a lot of moons] might be that the moons will gravitationally interact with each other, such as kick each other out, part of the three body problem. However, this can be easily detected, as rings would be seemingly affected. This obviously isn't so, due to everything being in a stable orbit, because the "chaotic" period is already passed, and debris settles down and recondense whenever possible.

Note: There can be moons also at the lagrange point if the point is near the "gap" you are taking about.

Another Note: Similar to lagrange points, uhoh mentioned another very good concept of co-orbital configurations, which is the interaction between two celetrial objects. Places with extremely possible stable orbits are called Trojan Points. One example of this is the Trojan asteroid groups which share the orbit with Jupiter. There are two Trojan Points near a given object so those points might harbor many stable moon orbits there too.

So my guess is that yes, there are stable orbits within this gap, and there is a good chance there are additional moons out there.

We are discovering more and more moons today. Jupiter is one good example.

@uhoh I would think that a considerable gap must be necessary, because moons would kick each other out or collide if the space were too small, forming another chaotic period. Orbits must have settled for moons to reform and since there isn't another gravitational disturbance, there shouldn't be more chaos. Depending on the size of a given moon, the gap must be large enough so that the moon's gravity shouldn't disturb another moon's orbit. Such events would quickly settle if it would happen because objects tend to move to stable places.

4
Is there a mechanism that makes small moons more rounded than comets?
4
How would a small TCO (temporarily captured orbiter) or other natural Earth satellite most likely be detected?
2
How old are Janus and Epimetheus?
17
Why do planets and satellites in the Solar system look so wildly different if they came from more or less the same matter?
0
How to calculate shape of orbit when projected onto the plane of the ecliptic
2
Is Jupiter really shepherding the main belt, and Neptune the Kuiper belt?