Recently I bought a telescope and I started to take pictures of my observations. The most basic solution, I'm using a smartphone adapter and my Xiaomi Mi 6 camera to do that but the images (except for the Moon sometimes) is too bad and Jupiter and its moons not even show in my screen. So I thought in use a more serious device to take the pictures.

I work with programming for 10 years (C#), so I can use something more "crude" if needed (like Raspberry Pi or Arduino). You guys can suggest something to start take decent shots of Jupiter and its moons?

There is no "best" camera as it really depends on the subject you intend to image and the optical instrument you intend to use with it. This could turn into a very long answer, so I'll try to offer a short response first and then offer a bit more to consider.

For planetary imaging, use a camera capable of doing video frames and this does not need to be a camera with a large chip or high resolution. Jupiter, for example, is just fractionally under 44 arc-seconds diameter when viewed at opposition. (compare to the moon at roughly 30 arc-minutes or more than 40x the angular width).

Typically you'd capture perhap 30 seconds to a couple of minutes worth of frames and then feed those frames into stacking software. Ideally the video frames use a "lossless" format. Several image processing applications can stack the frames (e.g. AutoStakkert & Registax are popular and free).

Ideally your scope would be on a motorized equatorial mount so that it keeps the object in your field of view (otherwise the object will quickly drift out of the camera frame. For this scope & field of view combination, that would happen in about 45 seconds for a planet in the "center" of the frame to drift out of frame completely). If using a 2x barlow, it would happen in about half the time. 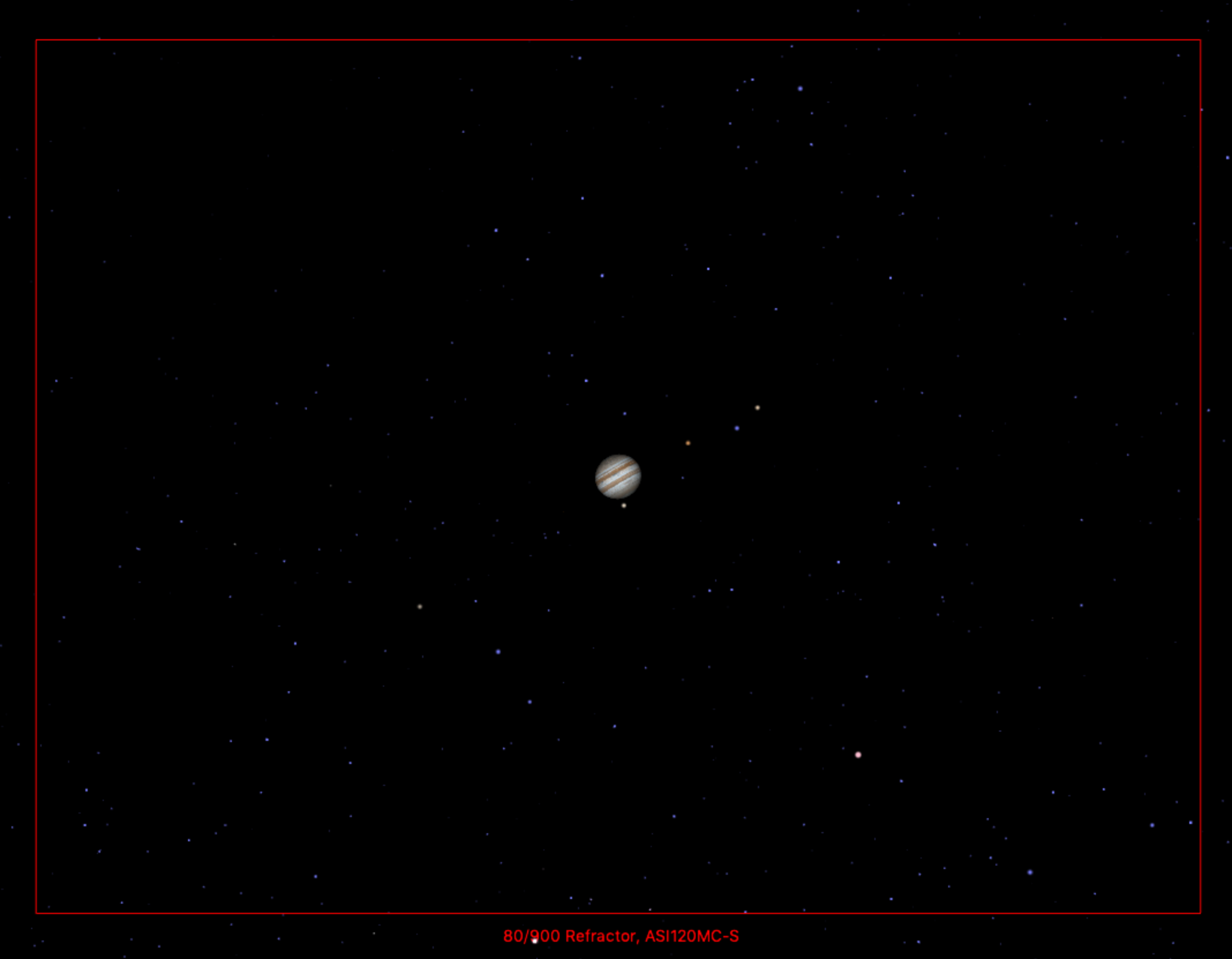 A barlow is usually used for planetary imaging (the simulated field of view did not use a barlow). To understand why, you'd want to read about Shannon-Nyquist sampling theory and how it applies to astrophotography.

A lot of people new to the hobby have no idea how difficult astrophotography can be. Of course, a lot depends on your expectations. If your expectations are for blurry, fuzzy images that might, or might not, be Jupiter, or M42, or any other astronomical body, then you have a lot of room. But if the assumption is that you want to take reasonable quality pictures (I'm not talking great pictures or professional pictures, but ones where the object is readily identifiable and clear), things can get very difficult.

The first part of the problem is that eyes and cameras are not interchangeable. They work very differently and have very different responses to light. There's a lot of similarity and overlap, but a lot of difference as well. As such, you can't just connect a camera to a telescope and hope to snap pictures as easy as you view objects. We are talking about two very different activities here, with very different needs.

It should also be stated that while some people have had some amount of success using cell phone cameras to capture images of astronomical objects, these cameras are fare from ideal for the purpose, and there's many, many more pictures people have taken this way that show nothing more than a blurry mess, if anything.

Another important thing to understand is that Astrophotography is not a monolithic subject - it encompasses many sub-specialties, each with its own needs as far as technique and equipment.

The two simplest divisions in AP are solar-system imaging versus deep-sky imaging. Solar-system imaging refers to anything in our own solar system, and for most amateurs really concentrates on four specific bodies: the moon, Mars, Jupiter, and Saturn. Without going into details as to why, none of the other planets make good photographic targets without significant equipment upgrades. But the moon, Mars, Jupiter and Saturn are fairly simple targets and make a good starting point. These CAN be captured with a cell phone, but this is not always easy. In particular, focusing is a difficult task. Even with a larger telescope on a mount intended for astrophotography, this can be difficult. With a manually-controlled telescope with fairly low aperture and magnification such as yours, keeping the object in the camera's field of view while you try to get the focus just right can be a major challenge. The moon is probably your easiest bet, followed by Jupiter, Saturn, then Mars. But you should also realize that Jupiter, Saturn, and Mars are only good targets when they're approaching opposition - the closest point to us in their orbit. Even this varies. At its largest size, when Jupiter is approaching its perihelion (closest point to the sun) and we are nearing aphelion (our furthest point from the sun) and those points happen to line up at the opposition point, Jupiter is only 51 arc-seconds in size. Any other time, it will be smaller than that. The best time to view or image any planet in its orbital cycle is when it is rising on the horizon at around midnight. This means it's near opposition, and will present its best view to us.

Another critical factor in planetary imaging is the atmosphere. If you live in an area with a lot of air pollution, humidity, dust in the air, pollen, etc, this can all have an effect on the image quality by affecting the clarity and refractive properties of the air. Wind and turbulence in the air can do so as well, and it doesn't have to be at ground level. Upper-atmospheric winds can be problems for imaging.

For planetary imaging, most of the best images currently being produced by amateurs are actually done through video and make use of a process known as stacking. In fact, nearly all AP these days uses stacking, which requires multiple sample points and, in essence, is a method of statistical analysis to determine the most likely correct value for each pixel.

The way this works starts with the image capture. Let's say you record a 30-second video at 30 frames per second (fps). This means that the end video has about 900 individual image frames. When you load this into the stacking software, the first task is to align the frames. The idea here is to make sure the target object in each frame is lined up, pixel-for-pixel, with the rest of the images in the "stack". Once this is accomplished, in theory each pixel location on each image in the stack should cover the same portion of the target object. At this point, then, the values of each of these pixels at the same location throughout the stack are analyzed. If you had 900 frames, then you should have 900 individual samples of that value. If you then average them out, you get the most likely "true" value for that pixel. When you do this for every pixel location in the image, you can reduce the effect of individual bad frames. You can also use the data to interpolate values for increasing resolution and detail. The end result actually can produce a better image than the telescope itself is theoretically capable of providing, due to the processing.

If you want to try deep-sky imaging (anything outside of our solar system), then the process gets even harder - and the equipment gets even more expensive. These objects (galaxies, nebulae, star clusters, etc...) tend to be very faint and require long-exposure images - shutter times measured in minutes or more. This requires equipment that can compensate for the apparent motion of such objects across the sky caused by the rotation of the Earth. In these cases, the telescope and camera take a back seat to the mount. I know people who have spent tens of thousands of dollars on mounts alone for this purpose. I myself have spent up to about $10,000 over 10 years to get to the point where I'm just starting to feel competent in this arena. Unfortunately, that telescope you have is not suited for this at all, and simply will NOT provide good imaging prospects at all for this kind of imaging.

In the long run, if this is something you are interested in, then I strongly suggest you look for an astronomy club or society near you. Most such clubs have at least a few people doing pretty good imaging. Join, meet those people, and get to know them so you can learn from them.

In the long run, I would strongly recommend putting astrophotography aside for a bit, get used to using your scope visually and learning more about the sky above. You might also consider learning to do astronomical sketching, which can help you better train your eyes and observing skills, which will help you enjoy the hobby more.

Not the answer you're looking for? Browse other questions tagged amateur-observing photography or ask your own question.