Can the moon's gravity influence be observed on the space station's orbit?

In browsing through Astronomy Stack Exchange, I came across this question about orbiting the moon (Is it possible to achieve a stable "lunarstationary" orbit around the moon?). In further looking, I came across (Can I measure the moon's gravity?) which seems to indicate that with sensitive enough equipment, the moon's gravitational pull could be measured on earth. This prompted me to wonder if the moon's gravitational pull can be observed on the Space Station's or geosynchronous satellite's orbital path? And if so, if any compensation (either short-term or long-term) needs to be performed due to the moon's gravity. I would think it to be relatively inconsequential, but am not sure, hence the question.

According to NASA, satellites in Earth orbit don't experience strong enough interference from the Moon to "whisk a spacecraft out of the game". To a satellite in Earth orbit, the gravitational pull of the Sun is actually ~160 times stronger than influence from the Moon. Source: A New Paradigm for Lunar Orbits (see EDIT note below for details).

However, gravitational pull from the Sun, the Moon, planets such as Jupiter (as well as other factors such as solar radiation pressure, atmospheric drag, etc.) do cause enough interference to slightly alter the orbital path of any satellite orbiting Earth. To compensate for the deviations all satellites must periodically fire their thrusters for brief periods of time in order to maintain the correct desired orbit. If a satellite has no fuel to perform these "orbital stationkeeping" maneuvers it essentially becomes space junk. Source: Is the ISS, and all other satellites, affected by the gravitational pull of the moon?

Note: the numbers above are computed under a simplified assumption that all orbits are on the same plane. In reality, due to the inclinations of orbits, the numbers can be somewhat lower, but the overall picture remains about the same.

The Moon's gravity perturbs the orbit of satellites, but for satellites in Low Earth Orbit, the perturbation isn't much.

Consult the image below. (found at https://space.stackexchange.com/questions/32684/which-orbit-around-earth-has-the-least-perturbation) The horizontal axis represents orbital radius, with the ISS being even closer to the Earth than the Iridium satellites. The vertical axis represents the amount of acceleration resulting from different sources. It is a logarithmic scale, so each step from the top represents ten times less effect. The top curve, marked GM, is the Earth's gravity, if the Earth was a perfect sphere with Newtonian gravity. That is the biggest acceleration on the ISS.

The next highest line is marked J2,0, it is a perturbing effect due to the fact that the Earth isn't perfectly spherical. You can also see that drag is quite significant for the ISS

So yes, the gravity of the moon has a known and measurable effect on the orbit of the space station, but it is much less than you might expect.

This is due to the fact that although the ISS is pulled towards the moon, so is the Earth, so when the orbit is measured relative to the Earth, it is only the difference in gravity of the moon between the near and far side of the Earth from the moon that causes perturbation of the orbit relative to the moon.

Similarly, although the force of gravity from the sun is greater, the difference in the sun's gravity is less, so the sun perturbs orbits less than the moon. 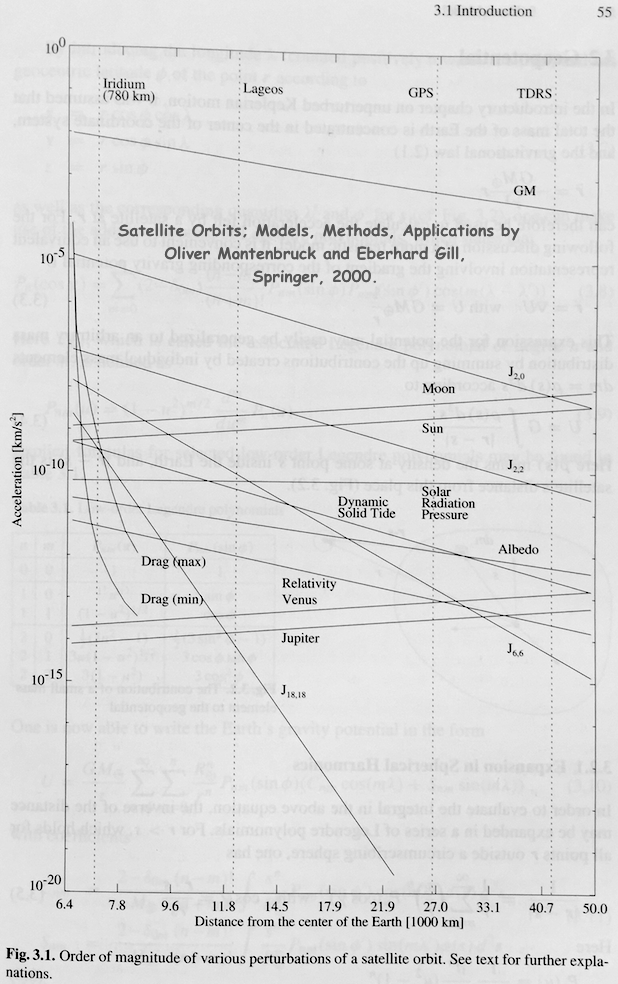 While sun's gravitatonal influence is much larger it's governed under rotational motion of bodies around sun. Earth and moon should be considered as a system of their own and in that system moon's gravitatonal effects are more effecitve on orbiting sattellites

Not the answer you're looking for? Browse other questions tagged orbit the-moon gravity .

47
Is it possible to achieve a stable "selenostationary" orbit around the Moon?
8
Can I measure the moon's gravity?

34
Is the influence of gravity instantaneous?
5
From what distance can one object influence gravity of another object?
16
Moon's orbit around the Sun
8
Can I measure the moon's gravity?
6
Can we simulate Earth's gravity in space?
13
How does the Moon's gravity affect Earth's oceans despite Earth's stronger gravitational pull?
1
Sun and moon's orbit in ecliptic coordinates using skyfield
18
Moon's unusual gravity
24
Why is the Moon's orbit so complicated?