How would the Tycho Impact have appeared from Earth?

The Tycho crater is thought to be the youngest major impact on the Moon, estimated at 108 million years ago. This puts it firmly in the reign of the dinosaurs, I find myself curious as to what our thunder-lizard brethren would have witnessed. 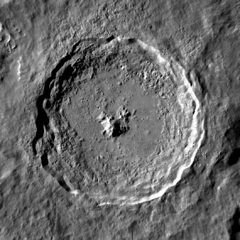 Roughly how bright would the initial flash have been? Would a glowing scar have been left on the Moon for days, weeks or months? Would the Earth have been subject to spectacular global meteor showers from ejected debris? Would any other effects have been felt on Earth? I'd guess that a simulation would be required to accurately answer these questions but I'm hoping that some reasonable estimates can be made by comparison of studies of other impacts.

Finally, was the Tycho impact of greater or smaller magnitude than the Shoemaker–Levy 9 impact in 1994?

I found a partial answer in this article on the smaller and younger Giordano Bruno crater.

The impact creating the 22-km-wide crater would have kicked up 10 million tons of debris, triggering a week-long, blizzard-like meteor storm on Earth...

So the secondary effects of the Tycho impact would have been even more spectacular. However, I don't know whether the fragments would have been large enough to devastate the Earth's surface.

Experimenting with an online impact simulator it appears that the Tycho impact was somewhere in the order of 1.00x10^23 joules, judging by the size of the crater. This is about four times that of the G fragment impact of Shoemaker-Levy 9. When you consider all the fragments it would be fair to say humans have witnessed an impact of similar magnitude to Tycho.

17
If the moon wasn't receding from Earth, what would be the impact on the weather and tides?
4
What kind of collision of celestial bodies would be visible to the naked eye?
6
What explains the distribution of new impact craters on Mars?
2
How big would the Earth look from the Moon?
5
Where do asteroids impact upon the Earth most often?
5
Is the boulder on the peak of Tycho Crater the core of the impactor, or is it a random rock?
10
How well would the Moon protect the Earth from an Asteroid?
4
What would a 220km diameter asteroid impact do to Earth?
7
What calculations show that Comet Shoemaker-Levy 9 orbited Jupiter for several decades before its spectacular impact? (Chodas, Sekanina & Yeomans)
10
If Planet Nine indeed exists, how large a impact event there should be to be seen from Earth?