Does Mars' "Northern ocean" have another name? What about the "Inland Sea"?

The March 15, 2019 Phys.org article A NASA spacecraft may have explored the edges of an early Mars sea in 1997 shows a stylized map of an area on Mars where the Mars Pathfinder landed and uses colors to indicate where bodies of surface water might have once existed.

They are labeled as 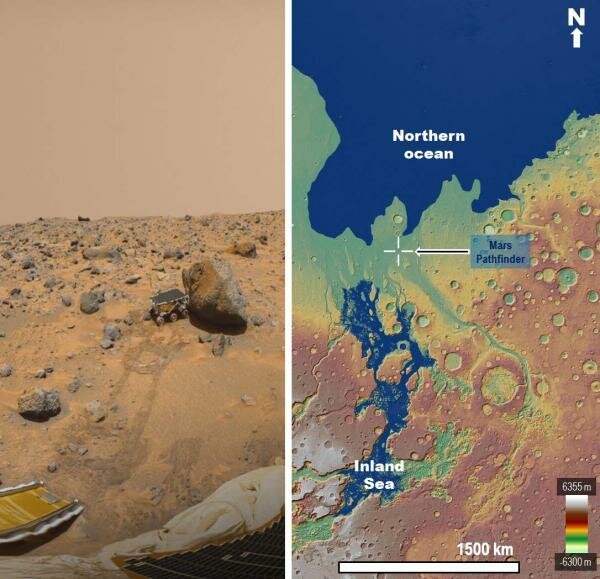 According to the Wikipedia article on the Mars ocean hypothesis, the ocean is sometimes called the Paleo-Ocean, and sometimes called "Oceanus Borealis" (a.k.a. "Northern Ocean" for those who feel that quidquid Latine dictum sit, altum videtur.)

The inland sea in the article is located in the Simud Interior Basin (part of the Simud Valles). The Nature article describing the findings (Rodriguez et al. 2019) doesn't appear to give the sea a name, although it does use the term "SIB sea" at one point.

Not the answer you're looking for? Browse other questions tagged mars water naming planetary-science .

10
Does the Moon Have Enough Water for Robert Zubrin's Mars settlement Plan To Work?
14
What is the name of our Solar System?
3
What is the temperature about 10 or 15 feet below Mars' surface?
3
Ross 128 (What does the number mean?)
6
Does IC 1101 have any name?
3
What name was voted for Tau Boötis b by the Name Exoworlds Project?
1
What are the most recent minerals modified by water found to date on Mars?