At what annual rate are new exoplanets being recognized? How does it compare to new asteroids?

I just read the BBC News article Exoplanet tally set to pass 4,000 mark . It makes me wonder about the annual rate that new exoplanets being recognized, and how it compares to the rate of new asteroids.

I'm also wondering if there is any chance there will be a crossover in the rates in the next few years. TESS has found it's first exoplanet, and hopefully WFIRST will be on schedule as well.

At what annual rate are new exoplanets being recognized? How does it compare to new asteroids?

Assuming exoplanets have been discovered at a constant rate since 1995 (not very true) then the rate is very approximately 117 exoplanets a year. Comparing to the Minor Planet Center (MPC) archive stats which are plotted below: 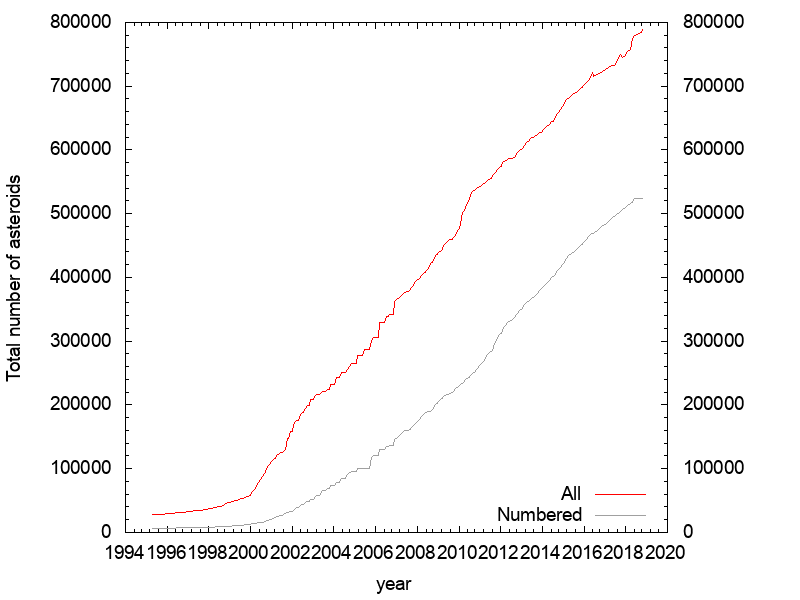 which shows that approx. 761,000 asteroids of all types have been discovered since 1995 April or roughly 22,000 a year. (The lower black line is for the smaller number of asteroids that have been seen enough times and the orbit is secure enough that they can be numbered).

Exoplanets suffer from magnitude and volume-limit problems in that to get a large enough number on the sky to discover large numbers of them, requires going faint. Since confirming an exoplanet and ruling out other explanations such as blended background stars and M dwarf or brown dwarf binaries (which give similar transit depths but different radial velocity amplitudes) requires a large additional effort and high precision spectroscopy to confirm them, this becomes the bottleneck requiring tens or more of hours of large (4m) telescope time to confirm each of the fainter exoplanet candidates. Additionally the most numerous exoplanets in the 2-15 times of the Earth range are very tough to confirm as the RV amplitude is very small (few m/s or smaller depending on the orbital period).

I'm also wondering if there is any chance there will be a crossover in the rates in the next few years.

Because of the limitations discussed above, the chances of there being a cross-over in rates any time soon is slim to none.

Not the answer you're looking for? Browse other questions tagged exoplanet asteroids tess or ask your own question.

14
What are Trojan Asteroids and where are they located?
19
What practical considerations are there for amateur observations of transiting exoplanets?
15
How close are we to having the technology to measure planetary obliquity for exoplanets?
2
What kinds of technologies are required to directly image exoplanets
3
How are boulders formed on asteroids?
4
How common are exoplanets in distant orbits?
3
How did TESS scientists choose which stars to observe at a “2 minute cadence” in each field?
2
What percentage of gas giant exoplanets are in the habitable zone?
3
How many asteroids are named after musicians? Is there a searchable list for this?