Does the Sun's atmosphere have a scale height?

Much of the Earth's atmosphere has a scale height $h$ of roughly 7 to 8 kilometers such that the local density varies as $\exp(-(r-r_0)/h)$ where r is the radius vector and $r_0$ would be some reference radius above the surface of the Earth.

This works approximately, at least up to 50 km (six or seven scale heights).

The derivation of this approximation is based on a simple gas at constant temperature, and those probably don't apply to the Sun's atmosphere very well.

Nonetheless, are there regions of the Sun's atmosphere where density varies approximately exponentially in such a way that a scale height characterization would work over the range of at least a few scale heights?

The exponential decrease in density comes out naturally whenever you have a gas in hydrostatic equilibrium. The scale height $H$ is then given by the balance between the kinetic energy of the particles due to thermal motion, $kT$, and the gravitational energy of the particles, $mg$. This is often a good approximation, both in planetary and stellar atmospheres, and even in galaxies. That is, $$ H = \frac{kT}{mg} $$ where $k$ is Boltszmann's constant, $T$ is the temperature, $m$ is the average mass of the particles, and $$ g = \frac{GM}{r^2} $$ with $G$ the gravitational constant, and $M$ the mass inside the radius $r$.

The average particle mass depends weakly on metallicity, and mostly on the ionization state of the gas, since the small mass of free electrons compared to that of atoms pulls the average down. For a fully ionized gas, the mean molecular mass — i.e. the mass in terms of the hydrogen mass — is $\mu \simeq 0.6$, whereas for a fully neutral gas it is (e.g. Carroll & Ostlie 1996) $$ \mu \simeq \frac{1}{X + Y/4 + Z/15.5} \simeq 1.25, $$ where $X$, $Y$, and $Z$ are the mass fractions of hydrogen, helium, and metals, respectively. I mistakenly wrote initially that the gas is fully ionized, but that's not true; it is only partially ionized, and the hydrogen is largely neutral.

The above calculation are quite basic, assuming a completely isotropic Sun. But observations and more realistic models, both 1D and 3D, do indeed predict exponential density profiles, although with quite large variations across the surface (according to a Solar physicist colleague down the hall). I found this model from these lecture notes where the yellow curve shows the number density profile in the Sun's atmosphere. 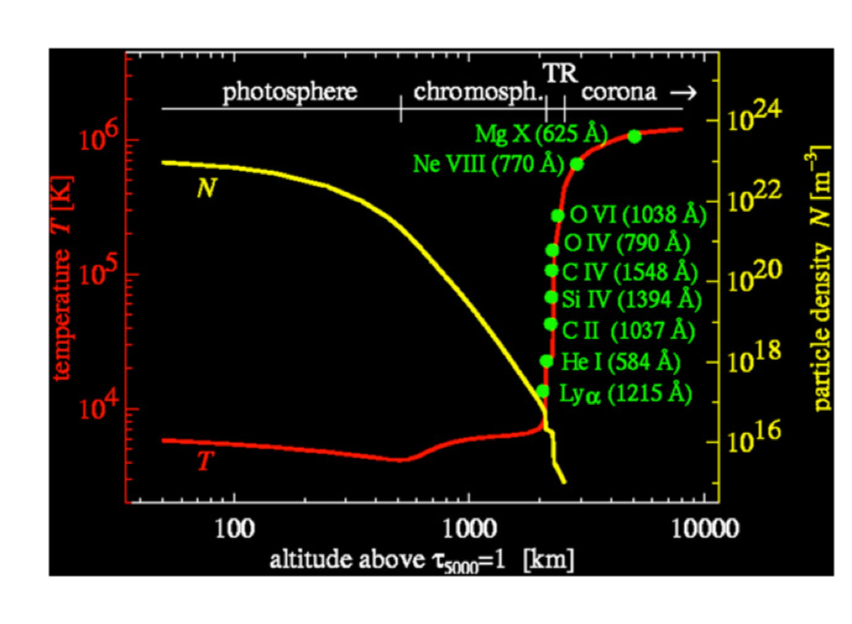 Extracting the data and plotting on a log-linear scale shows reasonable agreement with an exponential decrease of scale height $H = 140\,\mathrm{km}\,\mathrm{s}^{-1}$: 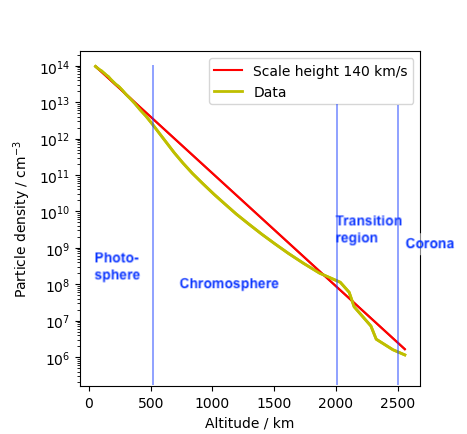 Not the answer you're looking for? Browse other questions tagged the-sun stellar-atmospheres or ask your own question.

0
What is the density profile within the Sun's photosphere? Which one of these is wrong?