Are astronomers waiting to see something in an image from a gravitational lens that they've already seen in an adjacent image?

The linked paper there shows "$\Delta t$" values of the order of 30 days, but it is hard for me to understand what the actual observable is.

What I'm asking for here is (ideally) if there is a well defined event that a lay person could understand, something blinking or disappearing or brightening substantially that has already been seen in one image produced by a gravitational lens that has not yet been seen in one of the other images, and is expected to be seen in the (presumably near) future.

If something like this does not exist, a substitute could be a case where this has happened, and the second sighting of the same event was predicted, waited for, and observed on time.

I have no idea if this happens all the time, or has never happened yet.

What you do is cross-correlate the observational datasets for the multiple sources and look for the "lag" that maximises the cross-correlation function. Generally speaking, the "events" are not really individual flares or dips, but the summation of all the time variability that is seen.

The variability in question usually comes about from the central portions of the "central engine" of a quasar or active galactic nucleus. For a supermassive black hole at the centre of a quasar, the innermost stable circular orbit is at 3 times the Schwarzschild radius ($= 6GM_{\rm BH}/c^2$). This basically defines the inner edge of any accretion disk and if we divide this by $c$ then we get a a timescale for the most rapid variations in luminosity output. So this is very nearly the same formula as presented in the linked question $$\tau \sim 3\times 10^{-5} \left(\frac{M_{\rm BH}}{M_{\odot}}\right)\ {\rm sec}\, ,$$ except that the supermassive black holes are much less massive than entire foreground lensing galaxies (usually). This the timescale of variation is much shorter than the potential delay time due to gravitational lensing. It is this difference in timescales that means there is plenty of "structure" within the light curves that can be locked onto by the cross-correlation.

There is a notable example however of a type Ia supernova being seen in a multiply lensed image (Goobar et al. (2017), but the predicted delay in the light curves was $<35$ hours and the light curves are not good enough to measure this. This technique is an active area of research and a major bit of science that is exprected to be achieved by the Large Synoptic Survey Telescope (Huber et al. 2019).

Finally, the thing you are really looking for has happened in terms of SN "Refsdal". This was a type II supernova seen to "go off" in a multiply imaged galaxy, seen through/around a galaxy cluster. A prediction was made, based on a model for the cluster gravitational potential, that another image ought to appear within a year or two. This further image was then detected by Kelly et al. (2016) in a paper entitled "Deja vu all over again". 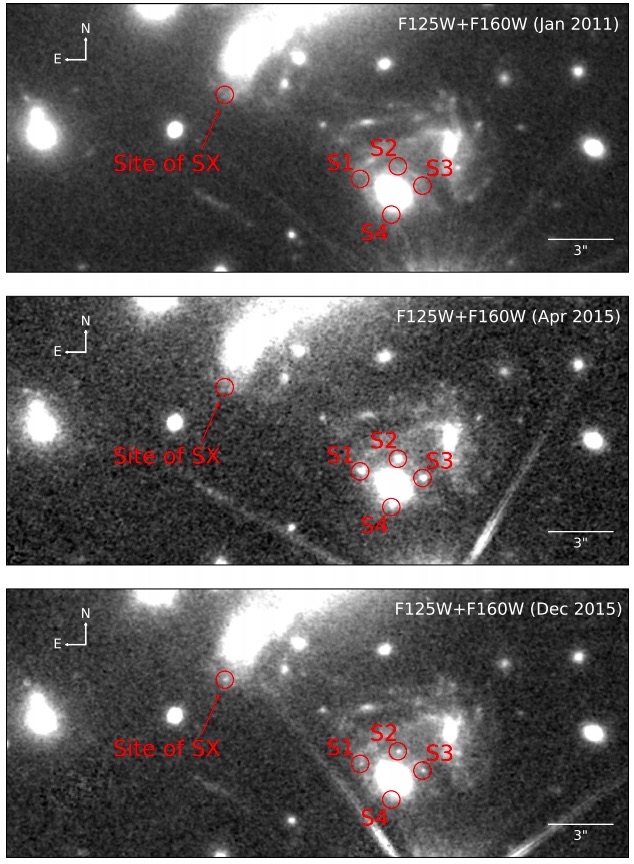 Figure 1. Coadded WFC3-IR F125W and F160W exposures of the MACS J1149.5+2223 galaxy-cluster field taken with HST. The top panel shows images acquired in 2011 before the SN appeared in S1–S4 or SX. The middle panel displays images taken on 2015 April 20 when the four images forming the Einstein cross are close to maximum brightness, but no flux is evident at the position of SX. The bottom panel shows images taken on 2015 December 11 which reveal the new image SX of SN Refsdal. Images S1–S3 in the Einstein cross configuration remain visible in the 2015 December 11 coadded image (see Kelly et al. 2015a and Rodney et al. 2015b for analysis of the SN light curve).

Not the answer you're looking for? Browse other questions tagged observational-astronomy gravitational-lensing .

12
How do we know that objects that appear in duplicate or triplicate, etc. due to strong gravitational lensing aren't actually multiple objects?
6
Does gravitational lensing provide time evolution information?
3
Has a gravitational microlensing event ever been predicted? If so, has it been observed?
1
Examples of radio correlations over times much longer than interferometric baselines?

6
Telescope in Sun's gravity lens focus - pointing, gain, distortions
10
With gravitational lensing, is it possible to mathematically compute the correct image of the galaxy that is being distorted?
2
How are microlensing events used to constrain the size of innermost stable circular orbits around spinning black holes?
5
Expected nature of LISA's data; will it be more like a forest of static peaks, or a series of individual events?
1
How are younger objects outside our observable universe when the older CMB is an observer's temporal "edge"?
2
Can a supernova or a close passing star create a transient sun gravity focus "habitable zone"?
3
Has a gravitational microlensing event ever been predicted? If so, has it been observed?
0
What are the most distant extended objects we can see (or that are seen up till now)?