Are quasars simply AGNs that are viewed from a particular angle?

I found the picture below in an answer to the post "Was the Milky Way ever a quasar". The picture is published on a website belonging to "NASA/IPAC Extragalactic Database". In the answer that has 16 "thumbs up" it says:

A quasar is simply an active galactic nucleus (AGN) that is viewed from a particular angle; see the picture below, in which quasars are labeled "QSO". This is really a remarkable figure because historically all of the names in the figure were thought to correspond to different types of objects, when really they all refer to the same thing! 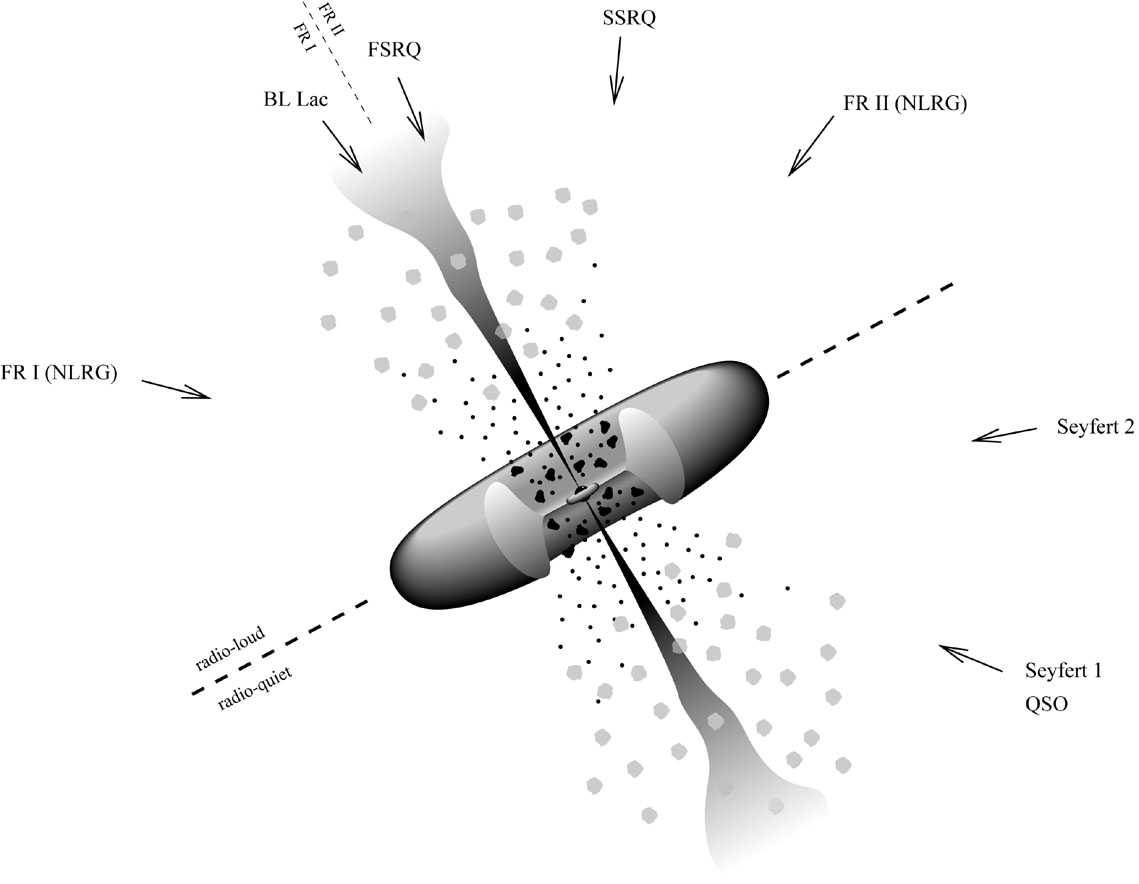 There is another answer to the question "Difference between quasar and Active Galactic Nuclei?" where someone states that a quasars:

main property is that it's galaxy axis points towards the earth and this way we receive its light and radio signals. That's why they are one of the most energetic AGN.

This answer has gotten six thumbs up. However, there is no reference to any source backing up that claim so it seems like private opinion.

There is total confusion in the answers you refer to.

Quasars were first defined because of their star-like appearance - quasi-stellar objects or QSOs.

The fact that they are Galaxy-sized objects with point-like appearances means they are very luminous, dominated by central nuclear emission and far away (as confirmd by their high redshifts).

It was later recognised that quasars are just the high-luminosity end of the AGN zoo.

Quasars can also be viewed at a variety of angles and have distinct properties as a result. So there are radio-quiet and radio-loud quasars, broad absorption line (BAL) quasars and optically violently variable (OVV) quasars. The distinction between these types is thought to be dominated by viewing angle, mass of the central black hole and the accretion rate. The nomenclature can also vary depending on what wavelength region you are talking about (radio, optical, X-ray etc.).

These objects have lower luminosity counterparts amongst AGNs - FR I and FR II AGNs, Seyfert I and IIs and blazars (or BL Lac objects) - again, whose differences are largely explained by viewing angle.

I don't think these days it is helpful to think of quasars and AGNs as different objects. They are actually similar and it is just a question of the scale of the accretion process going on at their centres that is different and covers a continuum rather than a bimodal distribution.

The consensus view is that Quasars are a type of AGN, and depending on precisely what meaning you put in "Quasar" it can also mean it is strictly a type defined by viewing angle.

I think the consensus view also holds that viewing angle is the dominating factor for the typology, but there are other factors and it might spark a huge bikeshed debate about what is the most important factor.

Anyway, the precise naming of the various types of AGN is a HUGE mess, mostly for the historical reason that AGNs where independent rediscovered in various different wavebands before anyone managed to come up with a unified description. For an impression of just how big the mess is, look at table 1 in this paper that lists several AGN classes: https://arxiv.org/pdf/1707.07134.pdf

Not the answer you're looking for? Browse other questions tagged observational-astronomy quasars active-galaxy .

22
Was the Milky Way ever a quasar?
8
Difference between quasar and Active Galactic Nuclei?

15
What percent of planets are in the position that they could be viewed edge-on from Earth? (and thus able to undergo transits)
16
Why are all quasars so far away?
2
If quasars are powered by black holes, why are they so bright?
0
What Right Ascension and Declinations are observable by a telescope from a particular location?
4
Is it possible that quasars are not powered by black holes but some other kind of compact, massive object?
4
How much light comes from quasars in an AGN?