What else could the Event Horizon Telescope Observe?

The Event Horizon Telescope was made possible in order to observe the details of supermassive black holes. This took a huge amount of work installing extra telescopes and developing the hardware and software needed to do VLBI at such short wavelengths. They have achieved spatial resolution around 25 micro arc seconds, comparable to the astrometric data from the Gaia space probe, but optimised for very different purposes.

So my question is what else could they usefully observe? What scientific targets have interesting detail at that angular scale and emit enough radiation at that wavelength to be observable?

Betelgeuse is about 640 light years away compared to 54 million light years for M87. It has an angular diameter of 0.042 to 0.056 arc seconds while the quoted resolution of the EHT was 0.000025 arc seconds so you'd expect some detail on its surface.

Betelgeuse seems to be undergoing a number of rapid changes right now. It is a young but very massive star and is racing through its evolution. It is only ten million years old but is expected to explode as a type II supernova within the next million years.

The best image of Betelgeuse is this from ALMA 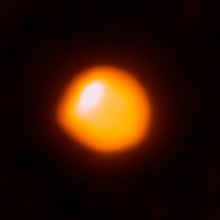 I guess the problem with this question is that there are many, many researchers and teams who would like EHT time to investigate their stuff, but those individual telescopes are already committed to other projects. The EHT people managed to pull this off because of the sensational nature of the target, a black hole! No other subject in astronomy would get so much attention, so many institutes working together, and bring in the funds and time

If we could assume that most of the mm-wave emission from an ordinary star is photospheric, then the EHT could make a massive contribution to measuring the radii of stars.

At the moment, this fundamental property can only be measured for stars in short-period eclipsing binaries or for a small set of nearby stars and more distant giant stars using infrared interferometry.

The state of the art for the latter is the CHARA array, with an angular resolution of 200 microarcsec. The EHT can do 10 times better, opening up a thousand times more targets for angular radius measurements, that can now be combined with Gaia parallaxes to yield physical radii.

This would mean that we could properly investigate the mass-radius relationship in low-mass stars, establishing whether rapid rotation and/or magnetic fields make them bigger. This would also lead to better determinations of the properties of transiting exoplanets.

That much I know about, but I suspect there are other, rarer types of star that might be brought into reach and others could be studied with more precision. I imagine that following the radius evolution of pulsating variables like Mira would be easy - they have angular dianeters of $\sim 10$ milliarcsec. But the nearest Cepheids have radii of around 40 times the Sun at about 400 light years (e g. Polaris). This would have an angular diameter of 1 milliarcsec, so significant progress might be made here.

Another place where super resolution at mm wavelengths would be highly advantageous, is in the study of protoplanetary disks. The mm-wave observatory ALMA has already yielded some exquisite images of disks around nearby young stars at angular resolutions of tens of milliarcsec. These reveal the possible traces of rings and gaps marking the onset of planetary formation. Presumably, observations at a much finer scale could be used to test detailed hydrodynamic models.

Of course, I have no idea if any of the above is feasible in terms of source surface brightness!

Maybe you could take a look at some of the most distant objects known? There is at least one known galaxy at Z=11. It will be far infrared at the source so I guess you might see a bit of it even if it does not emit much at radio frequencies. You also have the most distant quasar, the optically brightest quasar and the nearest quasar.

Cygnus A seems to already have been investigated using VLBI a few years ago.

Not the answer you're looking for? Browse other questions tagged radio-astronomy event-horizon-telescope .

13
What will it finally take to accurately measure the distance to Betelgeuse?
4
Would the Event Horizon Telescope be able to produce a superior image of Betelgeuse?