Can anyone one show how speeds greater than c cause a paradox on a space time diagram?

So according to Relativity, time moves at different rates for different observers, and distant observers will actually disagree on the order of events. Now from what I gather this gets sorted out for objects with relative speeds less than c, but would ultimately cause a paradox for anything moving faster because it would time travel. However, I don't really see how. On a spacetime diagram light always moves at a 45° angle, or at least some angle between 0° and 90°, and the only way I see anything effecting the past is if something moves at an angle greater than 90°.

So can someone please give a visual representation that explains the issue?

Suppose there was a magic gun that fired a bullet at ten times the speed of light relative to the firer.

If I have the only such gun, and I don't move then there is no paradox.

But now suppose these guns are generally available.

At time zero, an observer flies past me at velocity 0.5 c and I give them one of these guns. 7 years later, I fire the gun after them, so in my frame of reference the bullet will catch them at about time 7.36 years when they are about 3.68 ly away.

To get these numbers I just need to solve $10*(t-7) = 0.5*t$ to calculate when the bullet overtakes the spaceship.

In their frame of reference though, that occurs about time 6.38 years after they pass me, at which point, I am about 3.19 ly away from them (we both agree on our relative velocity).

Now we use the Lorentz transformation again to determine what time that is in our frame. We find that it is 5.81 years. A bit more than a year before we fired our bullet.

The key thing is that $n$ times the speed of light in one frame will be backwards in time in another frame.

The diagrams below illustrates this scenario. 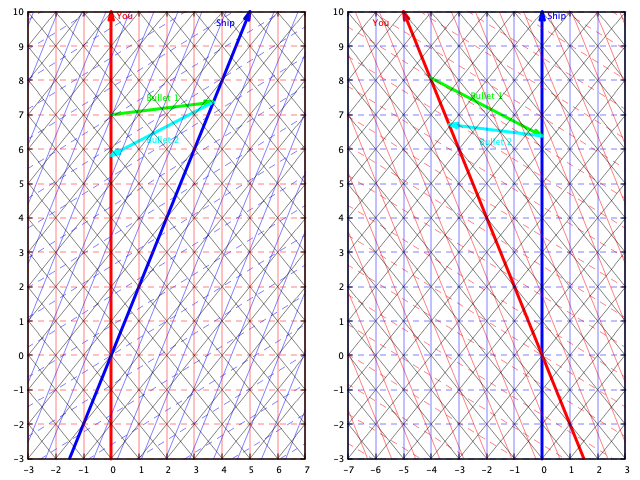 The black diagonal lines are some possible world lines of light rays. The red lines are lines of constant x (solid) or t (dashed) as determined in "your" frame of reference. The thick red arrow (at x = 0) is your world-line.

The blue lines are lines of constant x (solid) or t (dashed) as determined by the ship. The thick blue arrow is the ship's world-line. As can be seen you meet at the event that you both agree is x = 0, t= 0.

Assuming I've got this right, all the intersections and crossing patterns of red, blue and black lines, and the four world-lines should agree between the two diagrams, since they really do depict the same events. In particular both diagrams show a causal loop, in which the cyan bullet arrives back at the red observer before the green bullet is fired. They disagree about which bullet travels back in time, but that's relativity for you.

What this tells us practically is that any physics which allows FTL travel but not time travel must not be Lorentz invariant, so your gun will work differently in different frames of reference. We know of no such physics at present, and see no clues which suggest it might exist.

Sometimes spacetime diagrams can be misleading about paradoxes, though, because they might tend to suggest to you that information traveling from your present here, to what you regard (in your coordinates) as the past somewhere else is paradoxical, but it's actually not obvious if and when such a situation should be regarded as any kind of problem. That's because what you regard as the past is purely a coordinate issue, it's just the language you have chosen to describe when things happen. Thus if you use a strange coordinate system, you can send information into what you call the past (in the sense of an earlier time coordinate) without any problems at all. So there has to be some kind of limitation on the type of coordinate being used before this should be regarded as a paradox. As such, we want a way to understand what is the paradox in a way that is not married to the coordinates used.

To see this, you don't need a spacetime diagram, you only need to understand the relativity of simultaneity. It's also easiest to use the limit of superfast information, i.e., infinite speed. If you use Einstein coordinates to match up "today" with somewhere that is stationary with respect to you and is the distance of the Andromeda galaxy, you get the "Andromeda paradox," which says that if you simply break into a sprint toward that place, and reassess "what day is it there", you will find your Einstein coordinates tell you it is now tomorrow there, not today any more. If you then turn around and sprint away from that place, and reasses, you will conclude it is now yesterday there.

Thus, by repeating that sprint back and forth, you can make that distant place relive today over and over again. Of course it would be silly to think beings in that place really would relive that day, but that's what the coordinates give you. That's not a paradox, that's just exactly what does happen in Einstein coordinates under the Lorentz transformation. But if you couple this with two-way superluminal signals, taken to the extreme of infinite speed to make it really clear, what could happen is that if when you are standing still, you and someone at this Andromeda distance agree the date is April 17 in both places, when you sprint toward Andromeda you will think it is April 18 there and April 17 here, such that when you send an infinitely fast signal (in that reference frame) you will know they will not receive it until April 18. But if you send an infinitely fast signal when you are sprinting away (infinitely fast in that reference frame), you will know they will receive it on April 16.

That's only problematic if people at the Andromeda distance can also send an infinitely fast signal, in their reference frame, back to you. Then if you say "hello" while sprinting away, they will receive that on April 16, and can send back a "same to you" signal that you will receive on April 16! That's yesterday for you, and you will be puzzled what they were talking about, since you don't even know you will be doing some sprints the next day, let alone that you will be sending messages to Andromeda. So that's what we said is the real paradox-- the ability to send information back into our own past right where we are. That requires two-way superluminal communication-- one-way superluminal speed could just be an artifact of weird coordinates chosen.

Not the answer you're looking for? Browse other questions tagged special-relativity time-dilation or ask your own question.