How exactly does Hawking radiation decrease the mass of black holes?

From what I understand so far, when one of virtual particles crosses the event horizon and the other does not, they can not annihilate each other. The latter wanders off into the universe (btw, is it still virtual at this point, and what does 'virtual' mean at this point, if so?), while the other gets consumed by the black hole. I don't see how this event contributes to evaporation of the black hole (since the particles do not originate from the black hole). Shouldn't the consumed particle actually add-up to the black hole mass?

The closest question to mine is Does Hawking radiation in fact bring mass into the universe?, but I don't find the answers satisfactory.

I.e. "the escaped virtual particle is 'boosted' by black hole's gravitational field into becoming a real particle", rather adds to the question then answer it.

EDIT: I am humbled by the knowledge presented in the answers and feel incompetent to mark any as the most suitable. I hope this is okay.

I'm going to give you an intuitive answer. Keep in mind, this is not the "actual" answer, as the Hawking radiation is quite a bit more complex than the typical pop-sci explanation with virtual particles. But some intuitive justification is possible nevertheless.

I don't see how this event contributes to evaporation of the black hole (, since the particles do not originate from the black hole).

You're missing a key point here.

When the pair was generated, those were virtual particles. After one side of the pair was absorbed by the black hole, and the other side was released, the released part is a real particle. Huge difference there - virtual vs real.

Virtual particles don't really exist the same way that you and me exist. They seem to exist for a very short time; the more energetic they are, the shorter the interval of their virtual "existence", per the Heisenberg equation. In many ways they are just a mathematical trick.

Think of the vacuum, where no real particles exist. Before, it's just vacuum. Right now, a virtual pair flickers briefly, then it's gone. In the future, it's vacuum again.

What was the energy before? Zero. What is the energy in the future? Zero. What's the energy during the flicker? Well, it basically zero, within the limits permitted by Heisenberg's equations. Bottom line is, virtual particles come and go, and they do not contribute to the energy balance of some empty chunk of space.

(I am ignoring here the concept of vacuum energy, for the sake of an intuitive explanation.)

But let's say one of the virtual particles gets trapped by the black hole, so it cannot annihilate with its counterpart. The other particle flies off in the opposite direction and escapes the black hole. What's worse, this is now a real particle - we've exceeded the duration permitted by the Heisenberg equations, so the one that escapes is not virtual anymore.

How did that particle become real?

It comes from the black hole. The black hole gives up some of its mass / energy (same thing) to boost one particle from virtual to real. The other particle is captured - but being virtual anyway, it doesn't really matter.

What this intuitive explanation doesn't say is how the boost actually happens. I dunno, magic. Somehow one of the virtual particles gets a chunk of energy from the black hole and becomes real.

Well, gravity and acceleration are the same thing, per general relativity. So the strong gravity near a black hole is equivalent to strong acceleration. Something similar to the Unruh effect must happen there. That's the Hawking radiation.

EDIT2: The other answers currently on this page provide useful alternative points, so check them out too.

These lecture notes address the issues to some degree, especially on slides 33-35.

Because in the strongly warped spacetime near the horizon, virtual particles made from vacuum fluctuations turn out to have negative energy density.

These particles indeed have positive mass -- look at the one that escaped! -- but their mass is distributed very strangely over spacetime. (Quantum-mechanically speaking, particles have nonzero volume; this is an aspect of the wave-particle duality.)

and, a bit later:

This is the best explanation I have seen so far.

Heisenberg's principle allows you to temporarily violate energy conservation laws (e.g. create pairs of particles out of nothing) as long as you repay everything in time. The larger the particle-antiparticle pair, the quicker it has to be repaid. Converting a virtual pair to a real pair can be seen as generating a bit of negative-energy "exotic matter" (whatever that is) to represent the unpaid debt. Its energy is equal in size to the pair with the opposite sign. This then falls into the black hole along with one of the particles, decreasing the mass of the black hole overall.

The horizon of the black hole gets in the way of recombining some virtual pairs, so these conversions virtual->real will happen.

I found this lecture with the same idea (more detailed and less butchered): http://teacher.pas.rochester.edu/Ast102/LectureNotes/Lecture19/Lecture19.pdf

I don't know if the experts will agree with this description, but here is how I understand it:

The energy required to pull the two virtual particles apart equals the combined energy of the two non-virtual particles. So the falling ripple loses energy equal to two particles, and the hole eats one particle. Everything balances out with the one escaped particle.

I believe it works the same, regardless of whether the virtual particles are photons or a matter-antimatter pair.

Here's an analogy to Quantum Mechanics. A particle in QM can tunnel through an impossible barrier, which is how elements heavier than lead can have some of their neutrons "tunnel" out of the nucleus escaping the bonds of the Strong Force. 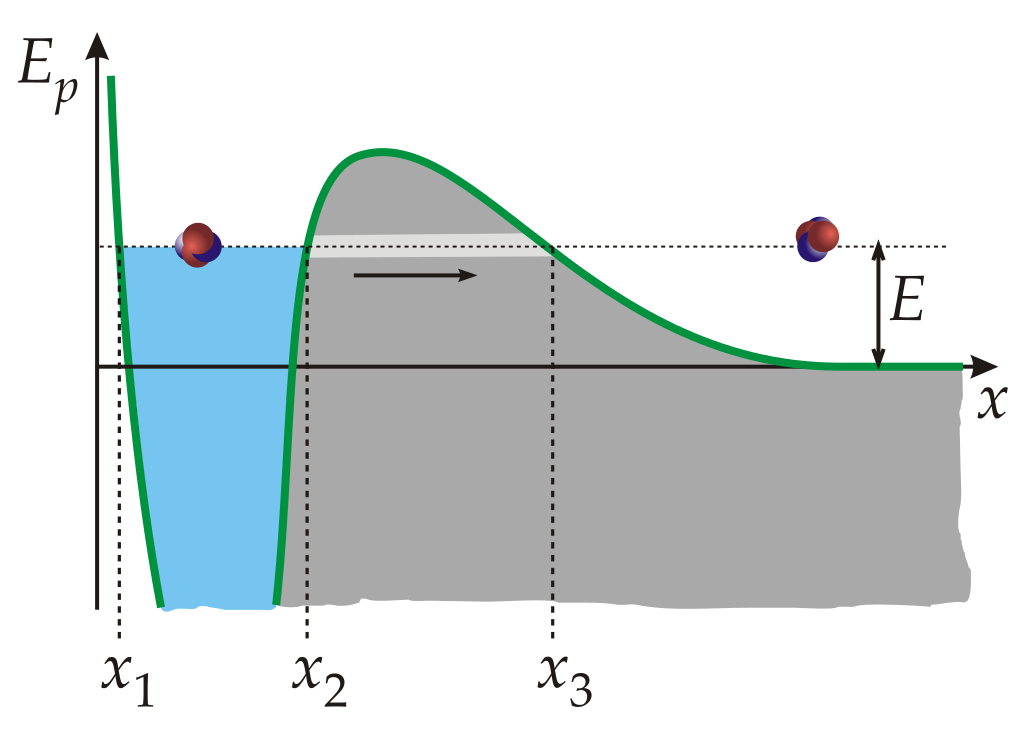 A small Black Hole is like a quantum barrier that a particle can be tunnel through to escape. The smaller the barrier (Event Horizon), the more likely it is to be able to tunnel out. So a micro black hole with a mass of 228 tons and a Event Horizon of 3.4 x 10^-7 femtometers (literally less than 1 millionth the size of a proton) won't hold on to it's particles for very long and at all. In fact it will explode in a burst of Hawking Radiation after exactly 1 second.