I know that Earth rotates around the Sun in an oval route: 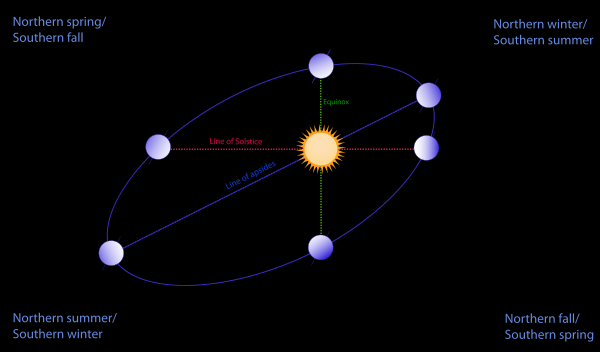 And I know the seasons happen, because the axis of the Earth is not vertical. I think it is 23 degree slope.

How come the distance from the sun when the earth at the closest point to the Sun has no effect and if it has effect what is it?

I can see that when it is summer on the northern hemisphere it is winter in the southern and vise versa.

Shouldn't be it is hotter time for both sides when earth is closest to sun and colder when it is furthest?

The amount of insolation (the solar irradiation a planet receives) follows the inverse-square law: half the distance to the Sun results in four times the insolation for a given surface area. However, Earth's orbital eccentricity is very low – currently just 0.0167 – which means our orbit is nearly circular, so the change in insolation is never so dramatic as a quadrupling: our perihelion is 147.1 million km and our aphelion 152.1 million km – a difference of just 5 million km – which means the Earth receives $\left(\frac {152.1}{147.1}\right)^2$ = 1.069 times (i.e. 6.9%) more insolation at perihelion.

Another effect of orbital eccentricity is that under Kepler's second law, Earth's orbital velocity is greater at perihelion than at aphelion: Earth spends about 4.7 fewer days in the seasonal quadrant at perihelion than in the opposite quadrant at aphelion. In other words, the northern winter and southern summer are slightly shorter, and the northern summer and southern winter slightly longer.

These variations do indeed affect the seasonal weather: the southern hemisphere currently has slightly hotter, shorter summers and colder, longer winters, and the northern hemisphere has slightly milder, longer summers and milder, shorter winters. 13,000 years ago, when the Earth's axis was pointing in the opposite direction, it was the reverse: slightly hotter but shorter northern summer, etc.

However, there are many other things that affect insolation and its impact on Earth, including variations in the Sun's radiation (for just one example, see the Maunder Minimum in sunspot activity), variations in albedo, scattering and absorption (e.g. greater northern hemisphere land mass means more heat absorbed; loss of Arctic ice in summer reduces surface albedo so more heat absorbed), variations in Earth's axial tilt, etc. It's very complicated!

Some of these variations are cyclic in nature. The combined impact on Earth's insolation from cyclic variations in orbital eccentricity, axial tilt (obliquity of the ecliptic) and axial direction (precession of the equinoxes) are described by the Milankovitch cycles.

19
Is Earth's orbital eccentricity enough to cause even minor seasons, without axial tilt?

5
Does the orbital variation in planetary gravity affect the Sun's corona
6
Understanding Earth Tilt, Sun's Position and Latitude Calculation
1
Did Earth "tilt" seasonally before it was accepted that the world was not flat?
1
What contributes the most to the seasonal temperature variation?
2
Question regarding the path of sun crossing zenith before the summer solstice
8
Effect of the obliquity of the ecliptic / tilt of the Earth on the equation of time
2
Is Earth's true anomaly roughly 1 degree currently?
5
Is there evidence for galactic "seasons"?