Need some sources on radiotelescope sensitivity

Could anyone direct me to papers with info on minimal flux that can be registered with radiotelescopes?

radio-astronomy radio-telescope
Share
Improve this question
asked May 1 '19 at 6:30

Total power received would then be

where $A$ is the receiving area of the dish and $\Delta \nu$ is the bandwidth in Hz.

The noise limit of an RF receiving system is often expressed as an equivalent temperature. A typical number might be 50 Kelvin, which includes a receiver temperature, sky temperature, spillover (thermal radio emission radiated from the ground) etc. Though it seems counterintuitive, we can add temperatures as a proxy for adding powers because we are in the Rayleigh-Jeans regime where $\nu << k_B T/h$ as explained in this answer

You convert the noise temperature to a power in Watts:

Let's set the minimum strength easily detected to be equal to the noise, and equate the two powers:

Note that the bandwidth drops out since both the thermal noise and most radio sources are fairly broadband. Even if the original line is fairly narrow, you'll tend set your minimum bandwidth of a specific measurement to cover the spectral region of interest.

The Arecibo dish has a radius of about 150 meters, so the area $A$ is about 70,700 square meters. A typical radio astronomy system temperature is 50 Kelvin (it can be significantly higher or lower depending on many factors, NASA deep space 70 meter dish liquid helium cooled front-end is 20K (see here and here), so plugging that into the equation above, we get $ = 9.8 \times 10^{-27}$ watts, which is (probably not coincidentally) almost exactly 1 Jansky!

According to Joeri van Leeuwen's Radio Astronomy lecture 5, The Radio Telescope at the bottom of page 79, the System equivalent Flux Density or SEFD of Arecibo is 3 Jansky, so a basic back of the envelope calculation gets us quite close!

Other radio telescopes will very roughly scale based on area, a smaller area dish will have a higher SEFD or signal level equivalent to the system noise.

A VLA dish is 25 meters in diameter, which is about 150 times less area. My back-of-the-envelope calculation would then be 150 Jansky.

According to Table 3.2.1 on the NRAO page Performance of the VLA during the Next Semester; Sensitivity at its lowest, a VLA dish's best SEFD is 250 Jansky. I've plotted the table below. Still checks out. 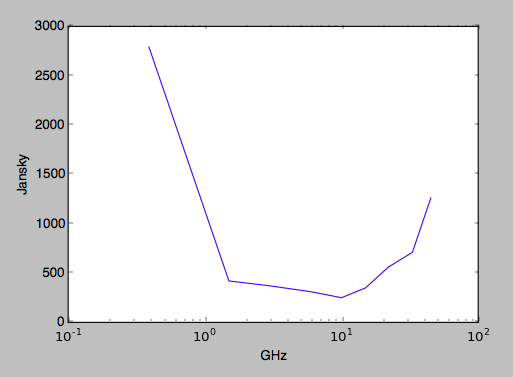 Not the answer you're looking for? Browse other questions tagged radio-astronomy radio-telescope or ask your own question.

6
Can astronomical radio sources be used as a verifiable randomness beacon?
2
How to calculate the integrated source flux density of a continuous source?
4
Is there a complete edition of the Cambridge Catalogue of Radio Sources (esp. 3C) available digitally?
0
How often do they move most/all of ALMA's dishes?
11
A "strange" unit radio astronomy
4
Why is 3GHz the best frequency at which to measure the sun's microwave output?
3
Do ASKAP and ALMA have "fast dump" interferometric modes? Can they see and perhaps report Fast Radio Bursts in real time?
1
Opening VLA Export Format data on Windows