False-color wavelength assignments in this "drop-dead gorgeous" image of NGC 2903?

The caption on the NASA page doesn't mention the color coding, nor does it mention a reference to a technical page for the image's construction or history.

Question: Is this close to a "straight RGB" image of NGC 2903, or were filters used at certain wavelengths, possibly including IR or UV, in order to highlight certain regions and emissions, then assigned false colors. If the latter, is it a standard color coding?

NGC 2903 is located about 30 million light-years away in the constellation of Leo (the Lion), and was studied as part of a Hubble survey of the central regions of roughly 145 nearby disk galaxies. This study aimed to help astronomers better understand the relationship between the black holes that lurk at the cores of galaxies like these, and the rugby-ball-shaped bulge of stars, gas and dust at the galaxy’s center — such as that seen in this image. Text credit: ESA (European Space Agency)

Spacetelescope.org indicates under "Colours & filters" that the blue channel of the image is from a 658 nm filter (red) and the red channel is from an 814 nm filter (near infrared). The cyan and orange rows of the table also list these filters; presumably the green channel is a blend of the two.

NGC 2903 is one of the brighter galaxies not in the Messier catalog. Here is a wider angle, more natural RGB image by Bob Franke, rotated for easier comparison. The reddish emission nebulae here appear blue in the HST image. 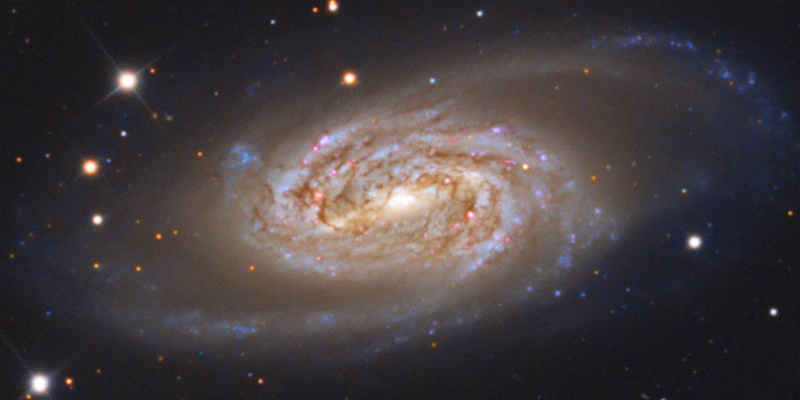 Not the answer you're looking for? Browse other questions tagged photography hubble-telescope image-processing or ask your own question.

4
Why are the stars in my image so green (false color image, HSO palette)?
3
Why does the Moon's terminator look "wrong" in this image?
3
What are the dark spots in this Hubble image of the Crab Nebula?
14
What are the large round dark "holes" in this NASA Hubble image of the Crab Nebula?
2
Why is this HST WFPC2 image so much fuzzier than the WFC3 image of the same field?
0
Is this image captured by the Hubble Telescope an original image?
2
How close to Earth were the asteroids moving through this Hubble composite image?
16
What is the "lost light" in this unusual Hubble Deep Sky image?
5
Why does the background noise in this image of 2020 QG look like corduroy?