When will the number of stars be a maximum?

There are very roughly a "mole" of stars in the universe. Wikipedia quotes an estimate of $3 \times 10^{23}$ though the number is associated with some debate and uncertainly.

I'd like to know if there are estimates of when the number of stars in the universe will maximize. Is it expected to increase asymptotically to some maximum, or will it peak and then decrease.

I suppose this could depend on what the definition of "star" is taken to be, if brown or black dwarf objects are counted or not. I don't want to pre-specify, it's more likely that a good, well-informed answer will include this information.

cosmology stellar-evolution galactic-dynamics fate-of-universe modeling
Share
Improve this question
edited May 7, 2019 at 0:43
uhoh
asked May 6, 2019 at 3:01

TL; DR Somewhere between now and a few hundred billion years time. (For a co-moving volume) Now read on.

If stellar remnants are included, then the answer is very far in the future indeed, if and when the constituents of baryons begin to decay. So let's assume that "stars" means those things that are undergoing nuclear fusion reactions to power their luminosity. Let's further assume that the stellar mass function, ($N(m)$ is the number of stars per unit mass) we see in the neighbourhood of the Sun is representative of populations in all galaxies at all times (difficult to make a start, without assuming this).

The number of stars that have been born is equal to the sum over time (the integral) and over mass of $N(m)$ multiplied by the rate at which mass is turned into stars in a comoving volume of the universe $\Phi(t)$.

I was going to (and possibly still will) attempt some sort of analytic approximation, but Madau & Dickinson (2014) have done it better and taken into account the metallicity dependence of stellar lifetimes and the chemical evolution of galaxies. The star formation rate peaked about 10 billion years ago, is more than an order of magnitude lower now and is exponentially decreasing with a time constant of 3.9 billion years.

The integrated stellar mass is shown in their Fig 11 (shown below). It is still increasing today, but at a very low rate and has not passed through a maximum. The reason for this is that most stars have masses of 0.2-0.3 solar masses and lifetimes much longer than the age of the universe. Even if these stars are added at a very slow rate, their death rate is zero at present. 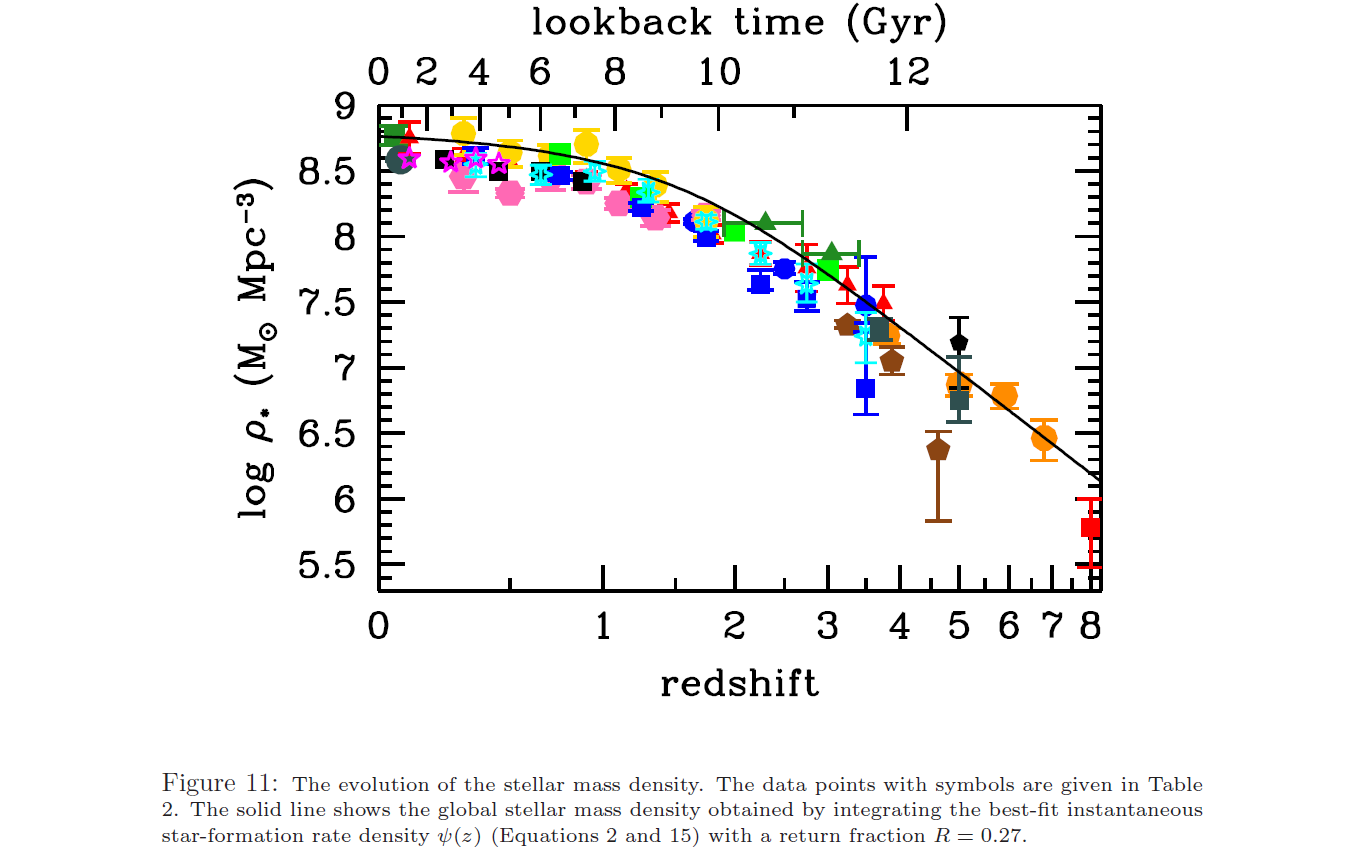 If star formation did continue at a low-level then the number of stars would only begin to significantly diminish once the stars near the peak of the stellar mass function, that were born at the earliest times, start to die. The lifetime of a 0.25 solar mass star is around a trillion years (Laughlin et al. 1997).

On the other hand if star formation ceased now then the number of stars would immediately begin to diminish.

Perhaps we could argue that the current exponential decline will continue and the peak will come in another few billion years when stars of 0.8-0.9 solar masses begin dying off. However, that is futurology given that we have no first principles theory that explains the time-dependence of star formation, so I believe the best answer that can be given is somewhere between now and a few hundred billion years time.

Not the answer you're looking for? Browse other questions tagged cosmology stellar-evolution galactic-dynamics fate-of-universe modeling .

11
Are there ways to estimate size of the "whole universe"?
5
How many generations of stars can be formed in the Stelliferous Era?
3
Is it be correct to say that we live in a young (only 14 billion years old) universe?

2
Will the Universe end by time stopping?
1
Dynamical modelling of galaxies with counter-rotating components using the Schwarzschild method
0
What will be the end of the universe?
12
What will future populations of stars be like?
3
Will it be dangerous when close stars become Red Giants?
7
Why is the number density of neutrons much larger in neutron stars?
2
The Lambda-CDM-model: when will the Age of the universe catch up with the Hubble time?