Are these real paths of planets as traced from Earth?

Few days a go, I came across these two pictures of paths of planets as observed from Earth. They have a perfect geometric shapes. Actually, to me they look so beautiful and perfect, that they appear fake or made by a pseudo-scientist or some propaganda society (e.g. flat Earth like community people) who talks about divine geometry etc.

Auxiliary questions: Is this the reason, why Earth was consider to be in the center of the solar system? 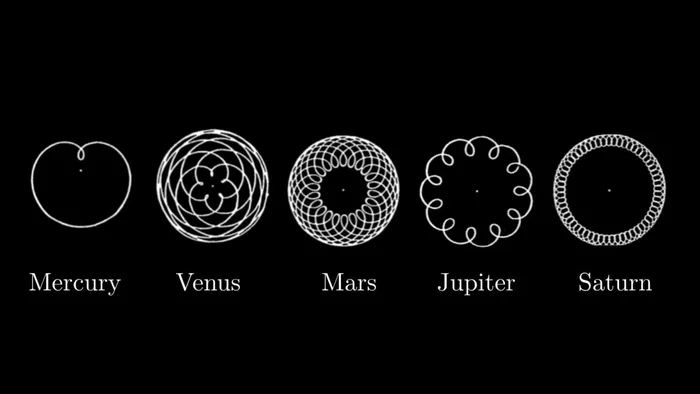 From this answer here are views of the inner and outer planets. I used the python package Skyfield which uses the NASA JPL ephemerides to generate positions of all the planets, then I subtracted the Earth's position to generate the geocentric positions.

I agree with your guess that the first image is too perfect.

The paths will not be closed, because there is not a rational number relationship (e.g. 5:9, 2:3, 1:1) between the periods of the planets.

The ones in the image are reminiscent of the Spirograph drawings I used to make a very long time ago.

The "outer" plotted bodies are Uranus, Saturn, Jupiter, Earth, and The Sun. The data is for 2000 months.

Distances are in AU. 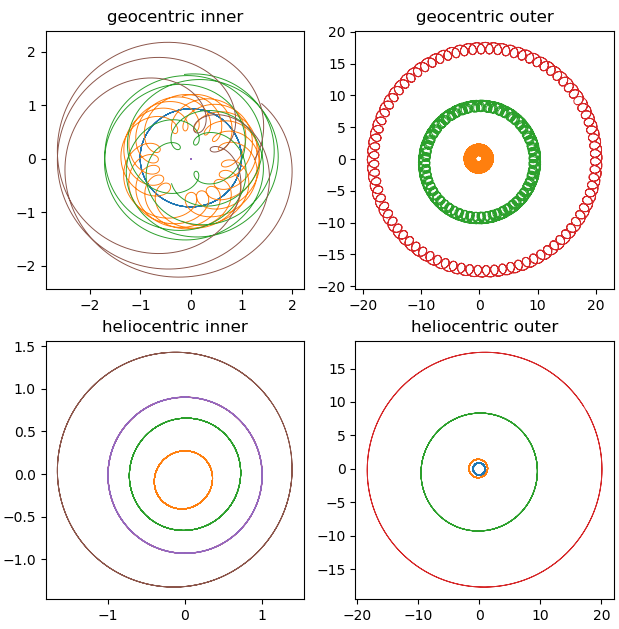 Not the answer you're looking for? Browse other questions tagged planet solar-system earth rotation planetary-transits or ask your own question.

2
Is Mars visible from naked-eye from Michigan (47N, 88W) these days?
6
What is the gravitational force felt on Earth from the other planets in our solar system?
3
What is the distance of Earth from the 7 planets, moons and the Sun at a point of time?
7
Are there any known planets whose axis is oriented such that one pole always faces its star?
3
Are other planets' gravity measurable on Earth?
1
View of other planets from the Earth
3
Are the planets Mercury, Saturn, Uranus and Neptune losing mass?
3
What percentage of habitable-zone planets are detectable by transit?