Power spectrum of matter in the Universe

I have a picture of a power spectrum of matter in the Universe. What is the connection to Lyman alpha? Please describe it for me (horizontal and vertical and shape). 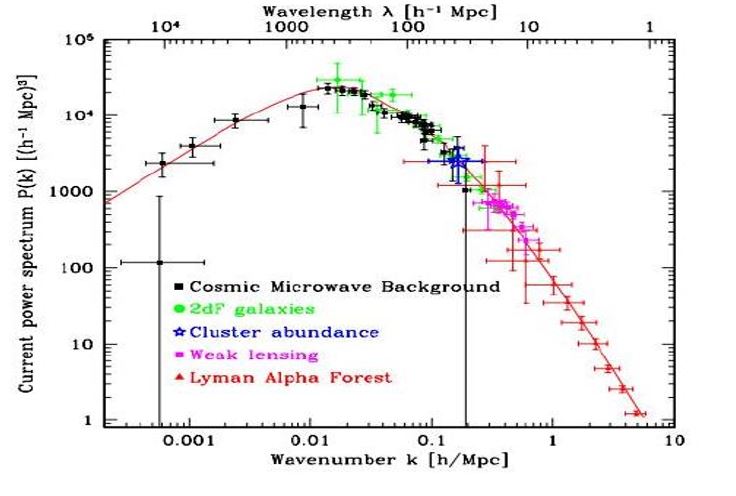 cosmology identify-this-object
Share
Improve this question
edited May 14 '19 at 17:32

The distribution of matter in the Universe is not uniform$^\dagger$. Rather, it has clumped together by gravity to form the structure we see, from planets and stars, to galaxies, to groups and clusters of galaxies. Exactly how much the Universe clumps on the various scales can be described statistically by the two-point correlation function $\xi(r)$, which gives the excess probability of finding a clump of matter at a certain distance $r$ from another clump, relative to a random, Poisson-distributed matter.

The Fourier transform of $\xi(\mathbf{r})$ is called the matter power spectrum $P(k)$, where $k = 2\pi/r$ is the wavenumber. The power spectrum thus shows readily how much structure there is on various physical scales, i.e. a high value means much structure. It evolves (increases in amplitude) with time or, correspondingly, redshift $z$, and so may be written $P(k,z)$.

The power spectrum can be written as the product of the primordial power spectrum $P_*(k) \propto k^{n_s-1}$ originating from cosmic inflation, and a transfer function $T(k,z)$ (squared) describing what happens at a later epoch. A good description is given by Peebles (1980).

The figure you show is taken from Tegmark & Zaldarriaga (2002). It shows the power spectrum as a function of wavenumber, but on the top $y$ axis you see the corresponding spatial scale. This scale is expressed in comoving megaparsecs (Mpc) (where 1 parsec equals 3.26 light-years). This factors out the size of the expanding Universe — or, equivalently, the epoch at which an observation is made — such that observations at different epochs in the history of the Universe can be readily compared. A distance $r$ at redshift $z$ will expand to $r(1+z)$ at redshift $z=0$. Using comoving coordinates, no matter at what value of $z$ we observe $P(k,z)$, we "extrapolate" to the current power spectrum $P(k)$.

Moreover, the distance is divided by the dimensionless Hubble constant, $h \equiv H_0\,/\,100\,\mathrm{km}\,\mathrm{s}^{-1}\,\mathrm{Mpc}^{-1} \simeq 0.7$. The reason for this is that different observations may have made different assumptions about the exact value of $H_0$; in general inferred distances will scale as $H_0$, so measuring distances in $h^{-1}\mathrm{Mpc}$ allows for direct comparison.

$^\dagger$This is fortunate, since otherwise you wouldn't be here to ask the question.

Not the answer you're looking for? Browse other questions tagged cosmology identify-this-object or ask your own question.

14
What is the Lyman Alpha forest Used For?
2
Has the Lyman-alpha forest ever been used to test Arp's theory?

10
If we “turned universe upside-down” and changed all matter to anti-matter instantly
12
Recommendation for introductory cosmology text
3
What is left of a universe where no matter and energy exist and is there a term for this?
0
Computing the over-density of Lyman-alpha emitters
2
Demo to get Matter Power Spectrum in cosmology
5
Understanding better the factors on $C_l$ in Angular power spectrum and Relation with Matter power spectrum