Relationship between Periapsis and apoapsis longitude

What is the relationship between Periapsis and Apoapsis longitude ? Are they 180° apart ? (ie) Periapsis + 180° = Apoapsis ?

Related question: if apoapsis is not known, what orbital elements are required to compute it ? 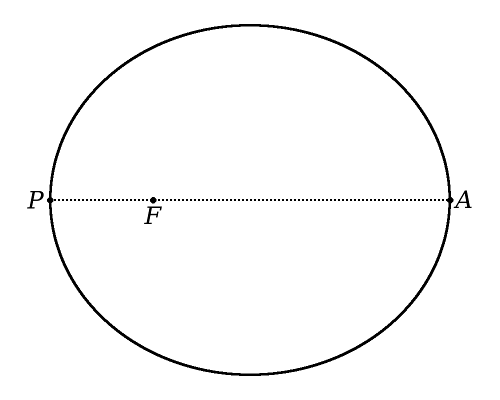 In a Keplerian orbit, yes, the apoastron and the periastron (I’ll stick to these words despite the controversy; see "Periapsis" or "Periastron"?) are 180° apart.

However, in the real world, Keplerian orbits don’t exist, and all orbits “precess” somewhat due to the gravitational influence of external bodies. This means that in practice, the apoastron and the periastron are not 180° apart.

This doesn’t amount to much in the case of Solar System bodies (always less than Mercury’s apsidal precession), but it can reach 19.9° per year for WASP-12b. However, this planet has a revolution period of barely more than a day, so again, the difference is not much between apoastron and periastron…

…but it’s still technically not zero!

Not the answer you're looking for? Browse other questions tagged orbital-elements or ask your own question.

2
Orbital elements: Difference between longitude of perihelion and argument of perifocus
2
What is exactly the “longitude of the perigee”
2
Name for 1-e and 1+e terms?
1
orbital angular momentum and the longitude of ascending node
1
Longitude of Perihelion at J2000?
2
What is the range of the zenith angle between velocity and position vectors?
2
Perihelion dates and parameters
4
Converting orbital elements from equatorial reference frame to ecliptic
6
Forms of stellar orbits around the galactic center