For the past few dates, I've been observing the rotation of the earth around the sun and noticed that the azimuth of the sun doesn't vary uniformly throughout the day. The azimuth varies faster during some parts of the day, depending on the position link.

Why does this happen? I've been thinking about the cause, but can't come up with a proper explanation. 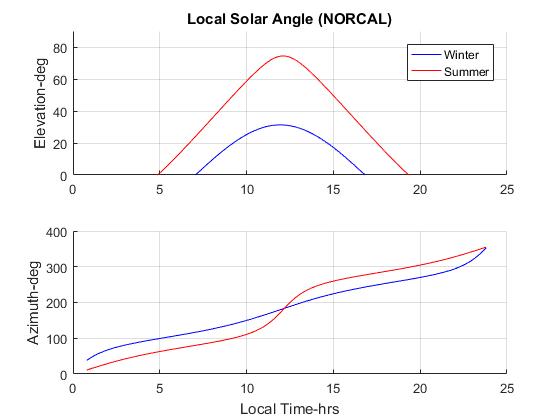 The Sun's hour angle, measured around the celestial equator, changes at a nearly constant rate. The gnomon of a sundial is aligned with the polar axis to take advantage of this. The celestial equator is oblique to the horizon except at the Earth's equator and poles.

The lines of azimuth converge at the observer's zenith and nadir, so the Sun's azimuth changes more rapidly near one of those points (e.g. summer midday, winter midnight) and more slowly near the horizon. The amplitude of this fluctuation depends on the Sun's declination and the observer's geographic latitude.

For an observer in the tropics, on a day when the Sun passes directly overhead, its azimuth swings abruptly from 90° to 270° at noon. For an observer near the north or south pole, the Sun remains near the same altitude all day, and its azimuth rate stays near the average 15°/hour.

Not the answer you're looking for? Browse other questions tagged the-sun rotation azimuth or ask your own question.

14
How does moonrise/moonset azimuth vary with time?
5
Is sundial time entirely dependent on solar azimuth?
33
Why do (most of) the planets rotate counterclockwise, i.e. the same way the Sun does?
1
Determine sun azimuth and elevation for shading a window throughout the year
3
How to calculate the maximum and minimum solar azimuth at a given location?
2
Solar azimuth for celtic fire festivals
1
How to calculate solar coordinates. (Right Ascension, Declination, and ultimately the Altitude and Azimuth of the Sun)
2
Does the Sun and Moon basically appear to “move on the sky” identically regardless of location and date?
2
Solar Azimuth angle Derivation