How did Arecibo make radar images of ice on Mercury's poles?

update: I still haven't been able to get my hands on the Icarus paper linked below (I'll try other libraries) but these are newer and quite interesting!:

How did Arecibo make radar images of ice on Mercury's poles?

From Chapter 6; Planetary Radar Astronomy in A Strategy for Active Remote Sensing Amid Increased Demand for Radio Spectrum (2015):

Radar observations from Earth continue to provide new information about the terrestrial planets and the Moon despite the many spacecraft flybys, orbiters, and landers. The unique radar back-scattering properties of water ice led to the discovery by ground-based radar of ice deposits in the permanently shadowed portions of impact craters at Mercury’s poles. High-resolution (1.5 km) radar imaging of these deposits has mapped out their distribution with high precision9 (Figure 6.9). 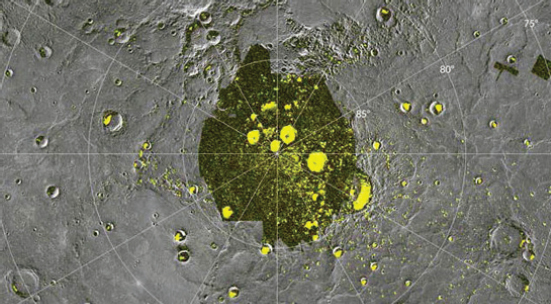 FIGURE 6.9 Arecibo radar image of the distribution of ice deposits at the north pole of Mercury (yellow), superimposed on a mosaic of Messenger orbiter images showing the coincidence of the ice deposits with the shadowed portions of impact craters. SOURCE: NASA/Johns Hopkins University Applied Physics Laboratory/Carnegie Institution of Washington.

Browse other questions tagged radio-astronomy radio-telescope mercury water or ask your own question.

11
How did water get on Earth
0
How to create synthetic test images of stars?
2
How did single dish (or single receiver) radio telescopes originally generate images?
3
Exactly how elliptical is Mercury's orbit, visually, without exaggeration?
2
“Mysterious radio signals” - how could a geostationary satellite and Ross-128 line up with Arecibo?
12
How did Arecibo detect methane lakes on Titan, and image Saturn's rings?
2
How was the Messenger spacecraft used to measure Mercury's orbital precession to such accuracy? Could this have been done using radar?
2
How can Mercury's sodium tail be imaged?