How would a Fast Fourier Transform Telescope work without a mirror, dish or lenses?

I recently came across a short article mentioning the idea for a telescope built without mirrors or lenses that instead uses an array of antennas and massive computing power to resolve an image. Such a thing will apparently become possible if "Moore's law continues to hold", but doesn't explain how it will work.

Here's a link to the original paper: Tegmark and Zaldarriaga 2009

We will show that it acts much like a single dish telescope with a dramatically larger field of view, yet is potentially much cheaper than a standard interferometer with comparable area. If a modern all-digital interferometer such as the MWA 1 is scaled up to a very large number of antennas N , its price becomes completely dominated by the computing hardware cost for performing of order N2 correlations between all its antenna pairs. The key idea behind the FFT Telescope is that, if the antennas are arranged on a rectangular grid, this cost can be cut to scale merely as N log2 N using Fast Fourier Transforms. As we will see, this design also eliminates the need for individual antennas that are pointable (mechanically or electronically),

Unlike a traditional interferometer, which consists of individual telescopes that focus light (or radio waves) to a point before ultimately combining their images, the antennas don't have a dish that focuses the radio waves from a certain point in the sky. Instead it's just an array of antennas that images the entire sky at once:

The results above also show that the FFTT can be thought of as a cheap maximally compact interferometer with a full-sky primary beam. To convert a state-of- the-art interferometers such as MWA 1, LOFAR [2], 12 PAPER[4], 21CMA [3] into an FFTT, one would need to do three things:

Edit: I think I understand it now. Watching this video was massively helpful for me in understanding how Fourier transformations allow you to isolate individual waveforms from a signal containing many different waveforms.

From one perspective, the purpose of a telescope lens, or mirror is to delay the light arriving in the centre of the instrument a bit relative to the light arriving at the edges. A lens is thicker in the middle, and light travels more slowly in glass, the path to the centre of the mirror and back to the detector is longer, because of the curve of the mirror than the one to the edge, and so on. The result is that all the waves which hit any part of the lens or mirror from a point source end up arriving at the detector in phase so they add up, while waves from anywhere else cancel out.

A phased array antenna (common for short wavelength radio operations) achieves the same delay by capturing the signal at lots of points on the (flat) antenna and then artificially delaying it before combining it with the signals from the other points.

An interferometer (such as the Event Horizon telescope) does the same thing digitally. The full waveform of the signal (more or less) is recorded in multiple places and then they are combined in a large computer with various slightly different delays to separate waves coming from slightly different directions (I am over-simplifying greatly).

What this article proposes is mainly a way to do that for more antennae at less computing cost by placing the antennae in a specific layout and using a bit of clever maths (the FFT) to do all the combining in one go.

I'll add some perspective in addition to the other existing excellent answers.

In a sense, single imaging optical telescopes or even single radio telescope dishes with focal plane arrays can be thought of as Fourier transform telescopes.

Fourier optics tells us that the relationship between the electromagnetic field at the aperture or pupil of an imaging system and the field at the image plane is Fourier in nature. A star viewed on-axis produces a flat plane wave at the pupil, and the FT of that is a delta function at zero. If you treat the finite diameter of the pupil, then the FT of the circular area is an Airy disk, which we say is "due to diffraction". If you have more stuff in the aperture (circular obstructions for secondaries, etc) you can take the FT of that and generate a point-spread function-like plot.

If the star is off-axis, you still have the plane wave with a flat amplitude, but the phase is now ramped across the pupil. The FT of that is the same delta function or Airy disk, but offset in position. Your second star is off to one side on the image plane.

The principle works for microscopes, cameras and projectors as well, the last one being vice-versa; the inverse FT of the projected object represents the field at the output of the projector.

With limited resources, an array might have tens or hundreds of dishes or receivers, and to get resolution at small angular distances these are spread out quite sparsely over a very large area. The patterns look like Y's or spirals or random jumbles, usually with most of the dishes near the center but a fraction at very large distances.

The computers that take in all this data are called "correlators" because they perform pair-by-pair correlations of the incoming digitized signals. The results of all of these correlations are then fed into an algorithm that generates an output image, but this requires some serious amount of modeling and careful processing to avoid wrong images or spurious artifacts appearing. An illustration of that is that the results of the Event Horizon Telescope were independently generated by different groups of researchers just to make sure that they came up with the same image after all that processing. There were so few telescopes used in the analysis that it would have been easy to end up with a crazy image.

A Fourier transform telescope would absolutely probably be built with a complete 2^M x 2^N evenly-spaced grid of receiving antennas or telescopes. Now instead of performing pair-wise correlations, you can just dump the whole thing into a computer architecture that has been optimized for performing a parallelized Fast Fourier transform on the data. It's going to be a big computer, but it can take advantage of hardware optimized for FFTs.

This analysis solves the same mathematical problem that a focusing lens or mirror solves, reproducing the Fourier transform of the electromagnetic field at the aperture.

You could build a giant dish the same size as this array, and put a giant 2^M x 2^N array of receiving feed horns at the focal plane of this dish and recover an image that way, but performing the mathematical FT on the output of the flat aperture is thought to be more practical at some point in the near future, when the hardware is fast enough.

below x2: Example of a small dish with a focal plane array, cropped from CSIRO ScienceImage 2161 Close up of a radio astronomy telescope with several more in the background. Click for full size. 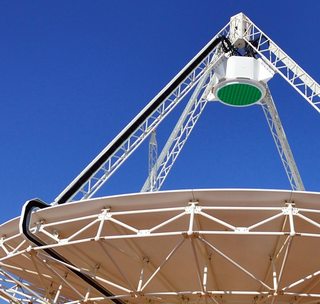 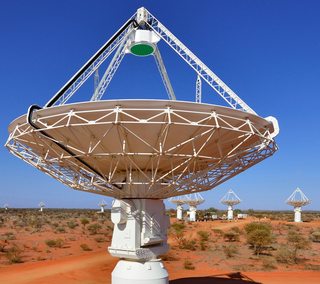 That the two different processes can both be used to produce wide-field images when the antennas are on a regular array is shown in Figure 1 of your linked paper, Tegmark & Zaldarriaga 2009 The Fast Fourier Transform Telescope, and some differences are nicely summarized in the caption, along with the unhappy face on the correlator. 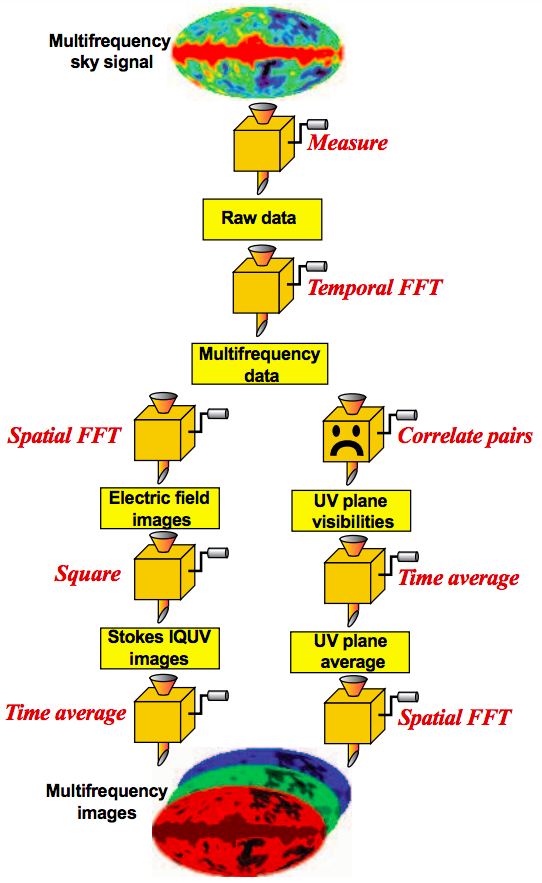 FIG. 1: When the antennas are arranged in a rectangular grid as in the FFT Telescope, the signal processing pipeline can be dramatically accelerated by eliminating the correlation step (indicated by a sad face): its computational cost scales as N2 a, because it must be performed for all pairs of antennas, whereas all other steps shown scale linearly with Na. The left and right branches recover the same images on average, but with slightly different noise. Alternatively, if desired, the FFT Telescope can produce images that are mathematically identical to those of the right branch (while retaining the speed advantage) by replacing the correlation step marked by the sad face by a spatial FFT, “squaring,” and an inverse spatial FFT.

When we have two telescopes, optical or radio, and we combine their signals together in hardware (using a beam splitter or electrical equivalent), we can call it an interferometer. If you have more antennas and you combine the signals with incremented phase offsets for each signal, you can also call that an interferometer. But by the time you have an ALMA or VLA we really don't call the combination of all signals as interferometry, because it's done in a more complicated way to recover images, rather than a single output like a stellar interferometer.

Like all science-fiction, it is a mixture of real technology and projections. Obtaining images from lensless telescopes is mainstream radioastronomy (like the recently famous picture of a black hole). We don't have technology to do it for visible light, but it's all electromagnetic radiation following the same rules so one might imagine building the necessary receivers and processing the data.

Yes, exposing your typical image sensor to light without a lens is not going to produce anything interesting (unless you are these guys), but radioastronomy has one advantage over visible light observations: they see the shape of the incoming waves, not just a photon count. Mathematically combining the waves in a correct way reveals what would happen if the lens were really there, creating the image similarly to what the real lens does.

19
Why do small mirror imperfections matter with modern computers
5
Could images of (very) nearby targets be recovered from Event Horizon Telescope data?
3
Current topics on Radio Astronomy and looking for advice
3
Reference request (explaining) how optical correlators combine light from multiple telescopes to produce ultra-high resolution interferometric images?
1
Why do radio telescopes, but not shorter wavelengths, have this Big Data problem?
0
Where do local users of ALMA live and work?

14
How Does a Refractor Telescope Work?
3
How do I remove fungus from a telescope mirror?
5
Dish antenna as parabolic mirror for OPTICAL telescope?
5
Would a telescope that uses Fresnel lenses be more practical than using regular lenses?
1
What telescope is this, and how does it work?
3
How does this telescope work, and what is it for?
2
How did Johannes Hevelius' long telescope work? Why all the round holes?
1
How much magnification would I get by this Dall-Kirkham telescope?
5
Does a star shaped mirror present problems either optically, or in signal processing over a more nearly circular mirror?