What constraints are there on solid material in the ice giants?

Recently there has been experimental verification of superionic water ice (suggested to be called ice XVIII, not sure if this nomenclature is official yet), which turns out to be a solid (or at least, solid-ish). This has been proposed to comprise a substantial fraction of the volume of ice giant planets like Uranus and Neptune, which is something of a departure from the idea that the bulk of these planets is fluid, though potentially the presence of substances other than water may modify things.

My question is whether there are any observational constraints on the presence of solid material in Uranus and Neptune, e.g. from the gravitational moments, tidal parameters, or global oscillations ("seismology") - I'm aware that the K2 mission failed to detect any global oscillations on Neptune so I'd guess this latter method may not help much.

(There is a previous question about solids in gas giants, but that one seems to be more focused on rock rather than ice and has ended up addressing Jupiter rather than the ice giant planets.)

NASA conducted a study on the Ice Giants in 2016 after recognition as a high-priority flagship mission target in the 2013-2022 Planetary Decadal Survey (overview of the Decadal Survey from The Planetary Society), a community document which helps set priorities and goals. The full report and summary are available from LPI's Ice Giants Mission Planning page and is intended to review the science and mission options leading into planning for the next decadal survey report. In the Science section starting on page 29, the introduction has a table of the major components of the different planet types (terrestrial, gas giant and ice giant) where ice giants are listed as ~10% gas, ~65% ice, ~25% rock with a total mass of ~15 times that of the Earth. This is in comparison to terrestrial planets which are almost 100% rock and gas giants which are ~85% gas. This is illustrated in the figure below taken from the report (their Figure 3-1): 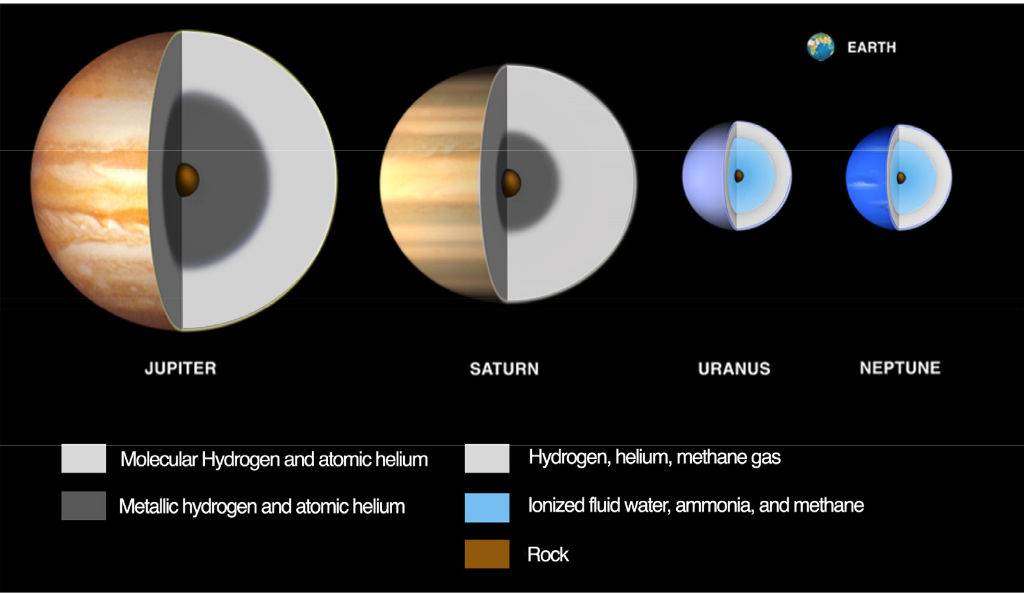 In the lead-in to the subsections on the various science questions and subsections, the report goes on to say:

We therefore consider the objectives of determining the interior structure of an ice giant (Section 3.1.1) and the bulk composition (including noble gases and key isotopic ratios, Section 3.1.2) as the highest-priority science to be done.

Section 3.1.1 on interior structure states that there is a presumption that these "ice giants" are dominated by water but there is very little direct evidence. It then explains that ice giants are normally modelled with three layers: an outer Hydrogen/Helium envelope, below that a thick fluid ionic water layer (or water mixed with other ices like ammonia and methane), and at the center, a small rocky core. However the limited amount of gravity field data from the Voyager 2 flybys showed that both planets are not as centrally condensed (less mass in the center) as expected in the simple 3 layer structure and also:

Both Uranus and Neptune have bulk densities a little under compressed water, implying that there has to be Hydrogen/Helium (H/He) envelope and which is indeed seen in spectra of the visible surface. Below this envelope though little is known apparently. The low density and the limited gravity data would imply a mostly water interior with other gasses such as ammonia or more H/He to keep the density lower than water and a very small amount of rock in the core Nettelmann et al. 2013 (arXiv paper link). This model however predicts an ice:rock ratio of more than 10:1 which is not seen in any of the other icy moons and the model does not explain well the heat flux coming from the interior. This presentation by Nettelmann at a 2014 ice giants meetings talks more about these models, the constraints from the gravity data from Voyager 2 and the heat flux problems and shows possible internal structure diagrams.

The interior structure section of the Ice Giants report ends by calling for measurements of the higher order gravitational moments J2, J4 & J6 to higher precision, particularly for Neptune. However this is limited to the bulk structure and doesn't constrain the layering which would need a Doppler imager on a spacecraft to measure planetary oscillations analogous to solar helioseismology and/or an entry probe. The Doppler imager is discussed more in Sections 3.3.1 and 3.3.2 of the report which note that these new instruments have the potential to provide great information on the interior structure, but that Doppler imagers are technologically immature and that even with the largest telescopes on Earth or near-Earth spacecraft it has not been possible to see if the oscillations exist and the oscillation amplitude may be too small to detect. The report also notes such an instrument is also large, power hungry and produces a large data volume, all risks on a constrained mission to the outer planets but the benefits outweigh the risks. (Using up most of your mass and power budget on an instrument that may fail, or not produce a measurable result, makes people very nervous...)

In summary, there are some limited constraints on the bulk components of the ice giants but this is still a poorly constrained and understood problem which is a subject of ongoing research but is need of additional constraints and data from a dedicated mission. Such a mission would need to be flagship class which makes it expensive and would need broad support from the majority of the planetary community and would likely need to be the top-ranked mission from the next decadal survey covering the 2023-2032 timeframe to stand a chance of being funded and flying.

6
Aren't there any rock or similar firm material on/in the gas giant planets?
1
Is there a term for asteroseismology as applied to giant planets?

10
What are the current accepted theories of the formation of the Uranian moon Miranda?
52
What would happen if an ice cube is left in space?
1
Why are gas giants colored the way they are?
4
Before Voyager 2, what were the highest quality photos of Uranus and Neptune?
6
Aren't there any rock or similar firm material on/in the gas giant planets?
4
Composition of ice giants
1
What are the most recent minerals modified by water found to date on Mars?
16
Is the water underneath Europa's ice cap potable?