Is the boulder on the peak of Tycho Crater the core of the impactor, or is it a random rock?

There's a strikingly visible boulder sitting right at the top of the peak complex in the center of Tycho Crater on the Moon.

Is it just a coincidence that this gigantic, bright rock is sitting dead center of the peak complex or is it a known piece of the original impactor that caused the wider crater? Does this remarkable rock have a name?

On 10 June 2011 the LRO spacecraft slewed 65Â° to the west, allowing the LROC NACs to capture this dramatic sunrise view of Tycho crater. A very popular target with amateur astronomers, Tycho is located at 43.37Â°S, 348.68Â°E, and is ~82 km (51 miles) in diameter. The summit of the central peak is 2 km (6562 ft) above the crater floor, and the crater floor is about 4700 m (15,420 ft) below the rim. Many "clasts" ranging in size from 10 meters to 100s of meters are exposed in the central peak slopes. Were these distinctive outcrops formed as a result of crushing and deformation of the target rock as the peak grew? Or do they represent preexisting rock layers that were brought intact to the surface? Imagine future geologists carefully making their way across these steep slopes, sampling a diversity of rocks brought up from depth. Tycho's features are so steep and sharp because the crater is young by lunar standards, only about 110 million years old. Over time, micrometeorites, and not so micro meteorites, will grind and erode these steep slopes into smooth mountains. For a preview of what Tycho's central peak may look like in a few billion years, visit Bhabha crater.

This is a version with about one fourth the linear pixel density of the original NASA full size image. 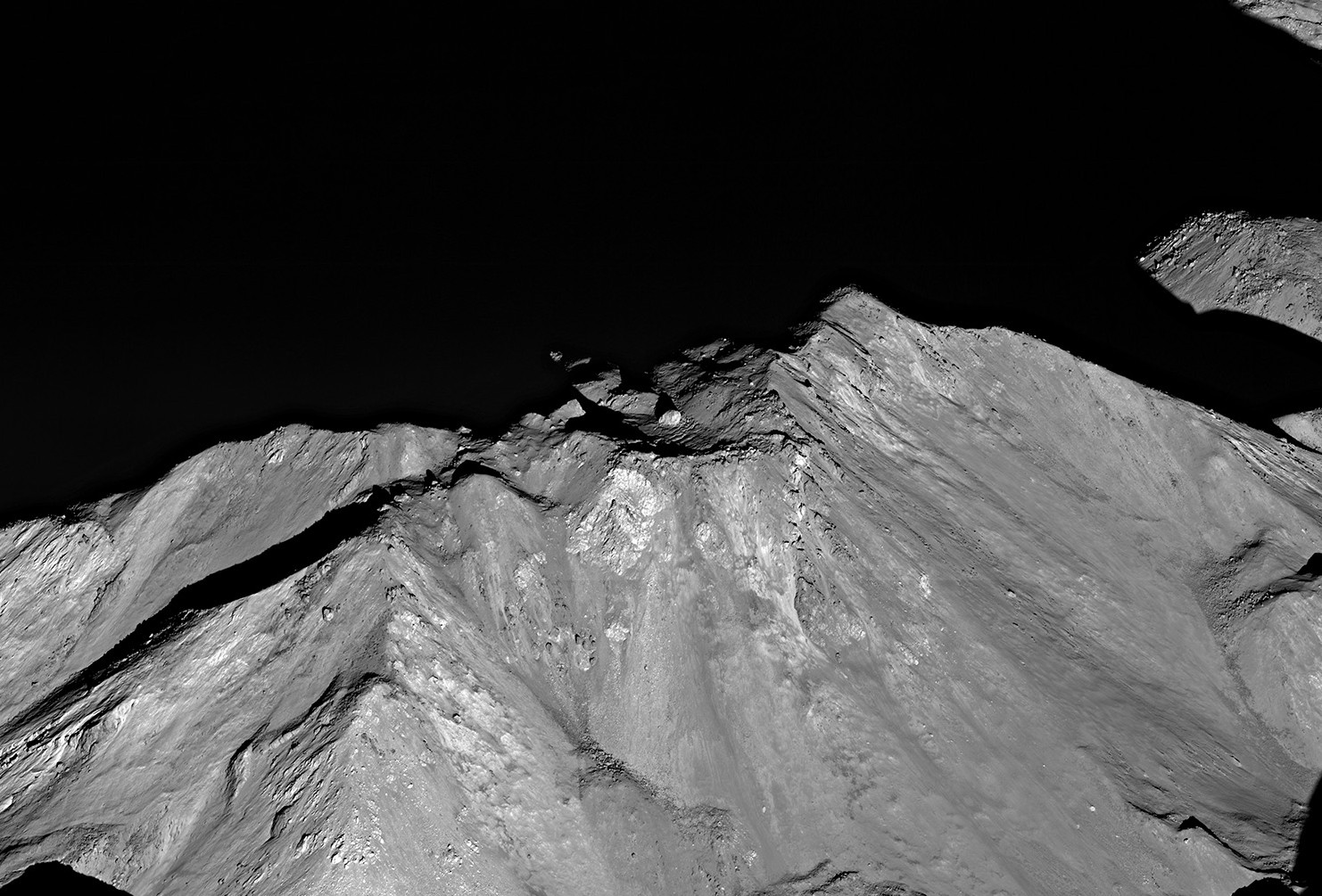 It is just a rock.

A complex crater like Tycho is formed in several stages as the rock behaves like a fluid. The initial impact completely destroys the impactor and excavates a large cavity in the moon, and ejecta is shot out to all sides.

Powerful shock waves push the rock to the side building large walls. As these push down on the edges of the crater, the centre is pushed up forming a central peak. Further faulting and cracking will continue to modify the crater and the peak.

It is possible that this is part of the breccia that falls back to the surface having been shot upwards in the initial impact, but that seems very unlikely. It is more probable that this is part of the ridges of the central peak that cracked and fell into the shallow valley on the top of the central peak, which formed during the faulting as the peak was pushed up from the crater floor. In all likelyhood, this is a piece of moon rock. As it hasn't been exposed to solar radiation for billions of years, it is comparatively light. It can't be a piece of the impactor, as that would have been completely destroyed

The photo shows a mix of dark basalt, light anortosite from under the basalt, and a thin layer of impact melt (shiny and rippled) that the Boulder is sitting in. On the slope of the peak towards the lower right, thereâ€™s a huge block that has slid down the slope from the rim. You can see blocks of light anorthosite in it, and you can see grooves running down the side like the gouges you see where a car has grazed a concrete wall.

Not the answer you're looking for? Browse other questions tagged the-moon crater planetary-science .

1
How do we get the angular size of a crater without lens?
3
What is the nature of "rock vapor" in this description of the formation of the Moon?
17
How would the Tycho Impact have appeared from Earth?
2
The dominance of Gravity vs Strength and its dependency on crater size
5
Is there an advantage to the equatorial region of the far side of the moon for a radio telescope or would any crater on the far side work?
9
How did the Archimedes crater fill with lava?
6
What's the difference between a crater and a basin?
25
Why is there a mountain inside the Herschel crater on Mimas?
3
How did the mountain range form in Galle crater?