Why does Jupiter have so many moons?

Jupiter has a great many moons - in the hundreds, and they're still being discovered.

What is the current theory for where all these moons came from? Are they rocks flying through space captured by Jupiter's gravity? 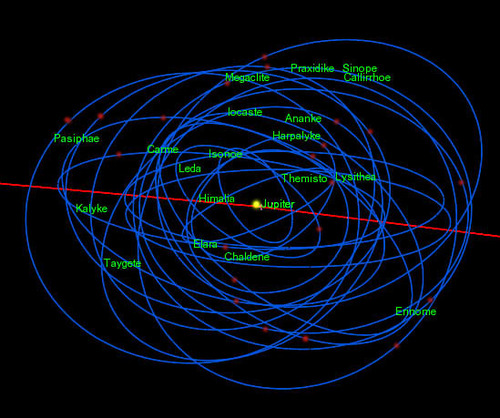 The more massive a body, the larger the gap between its lowest and highest orbit; the range of speeds at which a random body entering its gravity is likely to remain as its satellite. Sun has millions of satellites if you count all the asteroids; smaller planets tend to have one or two moons at most (Pluto with five being a notable and not fully explained exception)

To a lesser degree there's a matter of shape too. A regularly round body will have more regular and stable orbit than a potato-shaped one. Jupiter, being a gas giant is perfectly round. This doesn't play that much of a role though, especially with higher orbits.

And last but not least, no destabilizing influence of other bodies. It's very hard to maintain a lunar orbit - artificial satellites around our Moon last only a couple years each, because relatively close neighborhood of Earth tends to destabilize orbit of anything orbiting the Moon. Jupiter being a single massive planet with relatively tiny (relatively to its mass) moons doesn't have them influence each other all that much.

Most moons, especially those of gas giants, are not "formed", they are just "captured" (unlike our Moon, which could have been captured, but probably was formed in a much more exciting way).

Jupiter is the most massive planet in the solar system. It stands to reason that it has a larger region of gravitational influence (where its influence outweighs the force due to the other planets and the sun). So, it's easy for it to capture rocky masses.

If you have a look at the contours on the following image (Ignore the Lagrange points marked on it, I only want the contours) 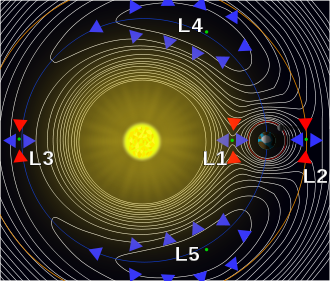 the circular area around the Earth is more or less the area (there's a velocity dependence here which I'm not getting into) in which a moon-like body can form a reasonably stable orbit. The size of the small "well" will increase as the planet moves farther from the sun, and also when the planet is more massive.

Jupiter is both pretty far away from the Sun, and is very massive. This leads to a huge sphere of influence.

The asteroid belt may have something to do with this too, but I doubt it (it's pretty far away). However, if we assume the "half-baked planet formation" theory for the formation of the belt, Jupiter may have leeched off much of the mass that would have otherwise become part of that planet during the formative period.

Not the answer you're looking for? Browse other questions tagged jupiter natural-satellites or ask your own question.

17
How was Io not torn apart by tidal forces during its formation?
12
What will happen when landing on Jupiter?
1
Is there some upper limit in the moon size distribution?
6
What colours can rocky planets (or moons) have
19
Did we discover 10 or 12 new moons of Jupiter?
8
What exactly is a “moon”?
4
What weather is present in Jupiter's great red spot?
5
Up to 384 minor planets (including Pluto) qualify as planets?
4
What would Jupiter look like from a Galilean moon?
6
If Jupiter and Saturn were considered stars, which of their moons would qualify as planets by 'clearing the neighbourhood'?