How is it determined that the X-ray and radio intensity come from a magnetic field bridge between two clusters of galaxies?

They both link to the new paper in Science A radio ridge connecting two galaxy clusters in a filament of the cosmic web (also arXiv).

Neither of these are spectral features so their distances can't be associated with the galactic clusters by doppler shift.

Question: How do they know that the X-ray and Radio continuum are both really coming from the space between these two clusters of galaxies, and not in front of or behind it?

"bonus points" how does Planck's "y parameter" figure in to this mix? 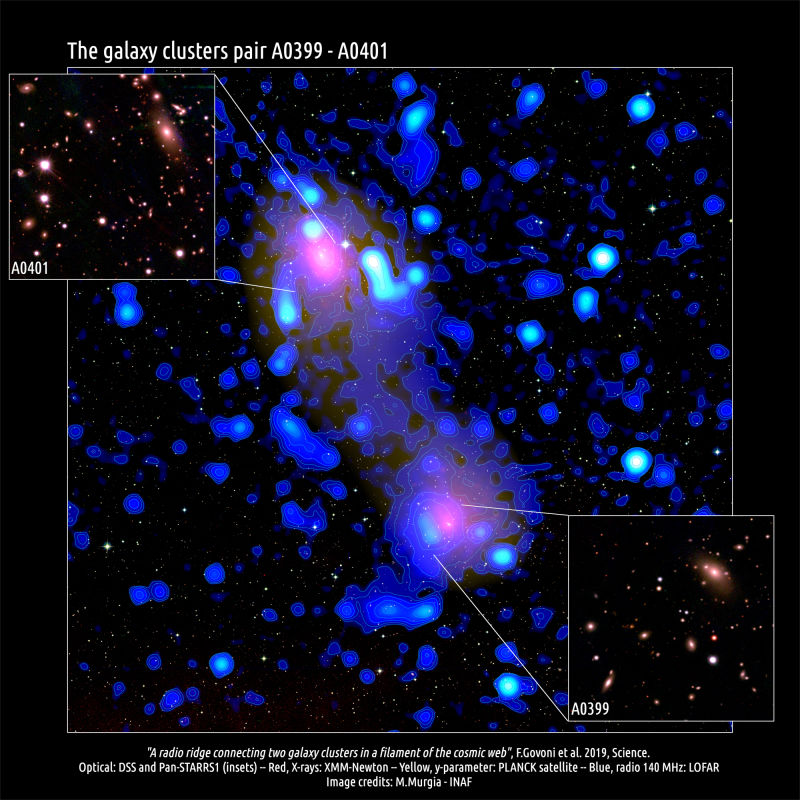 I think the answer is that it's primarily a matter of association on the sky, though there are some (weak) additional constraints.

The first thing to note is that there are three observations that are associated on the sky: the X-ray emission (which has been known about since the mid 1990s), the newly detected 140 MHz LOFAR emission, and evidence for a Sunyaev-Zel'dovich effect in the same region, from Planck data (e.g., Bonjean et al. 2018). From the caption to Figure 3 in the new paper: "The Planck data show a bridge of gas between the pair of galaxy clusters Abell 0399 – Abell 0401, in the same location as the LOFAR ridge." and from the main text: "The radio ridge is located along the filament of gas connecting Abell 0399 and Abell 0401 detected with Planck (9, 10)."

(The "Planck $y$-parameter", also known as the "Compton parameter", refers to the measurement of the Sunyaev-Zel'dovich effect due to inverse Compton scattering of cosmic background radiation photons, derived from Planck satellite data. I believe it's proportional to the line-of-sight integral of the gas pressure.)

The Suzaku X-ray spectrum of this region (e.g., Figure 2 of Fujita et al. 2008; see below) does have some spectral features, including the Fe K emission line. Due to the low spectral resolution, these features don't constrain the redshift of the X-ray-emitting gas very strongly (and I think Fujita et al. fixed the redshift at the mean of the two clusters in their analysis), but it would probably be noticeable if it differed by more than $\sim 0.1$ in redshift. 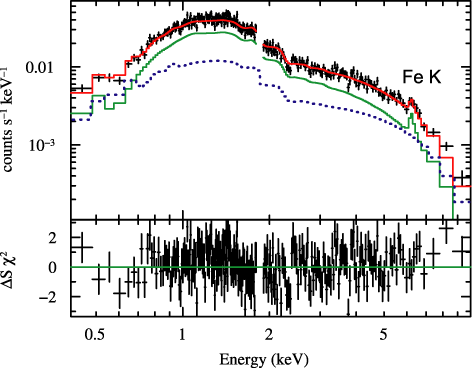 From Figure 2 of Fujita et al. (2008): Suzaku X-ray spectrum of part of the "bridge" region between the two clusters. Black is observed data, red is the combined model, including Galactic and extragalactic background (dashed blue), and emission from the inter-cluster gas (green).

Not the answer you're looking for? Browse other questions tagged radio-astronomy magnetic-field cmb x-ray xmm-newton or ask your own question.

2
How thick are the intergalactic filaments?
1
Why did it take five years to “figure out” how to use astrometric calibration sources to deblur LOFAR images?

5
How much magnetic attraction is there between the Sun and Earth?
1
How is the field of view of a radio telescope determined?
1
Why did it take five years to “figure out” how to use astrometric calibration sources to deblur LOFAR images?