What would you find within a void?

I'm aware that voids are relatively empty regions of the universe, but just how empty can they be? Wikipedia states that voids have 'few or no' galaxies, but I can't find much else.

To make my question specific, suppose I were in the centre of a large void, way outside of the few galaxies that may still exist in this void. Would I occasionally encounter asteroids (if I may call them such), rogue planets, or even some occasional intergalactic star?

Remark: I'm aware that this question is a bit of a one-up of What is there in the intergalactic space?. If this is too much of a duplicate, let me know and I remove the question.

The Wikipedia article on voids is pretty good (though IMO unusually awkwardly written.) The key thing is that voids are not empty, they are just large volumes which have a lower density (typically around 10% of average) compared with the rest of the universe.

These low density areas still contain stars and galaxies, just fewer of them and the galaxies they contain tend to be smaller. The Lambda-Cold-Dark-Matter (LCDM) model, which is currently favored as our best description of the universe, predicts that the voids should not have many large galaxies in them, but should have a fair scattering of small, diffuse galaxies (SDGs). (A small diffuse galaxy is, well, small compared with the Milky Way -- sized more like the Magellanic Clouds or one of the small galaxies which are being devoured by the Milky Way today such as the Sagittarius dwarf. They are also more spread out than the Magellanic Clouds.)

Here's an interesting senior thesis reporting on a search for small diffuse galaxies in voids. (They think they found some, but need confirmation.)

You ask what the night sky would look like from within a void. First, we'll assume you're in one of the SDGs, though this wouldn't make a huge difference. What you'd see mostly is whatever planets share your solar system -- they'd be comparable in brightness to our own planets from Earth. You'd also see a few dim stars. SDGs tend not to have much star formation, so there would be very few young stars and thus very few intrinsically bright stars. The visible stars would all be ones which happened to be nearby. And because SDGs are diffuse, there'd be many fewer nearby stars. At a guess there would be 20-200 naked eye stars, with only a handful of magnitude 3 or brighter. (Compare that with 6000 naked eye stars visible from Earth.)

There would be no naked eye galaxies. The SDG itself would not appear as a milky way, but more like the Zodiacal Light -- a vague glow dimly visible under exceptional conditions.

This would be a world whose astronomy would be heavily focused on the planets.

(Planetary formation might be quite different in SDGs, but I don't know even to try to speculate on how it would be different. So I assume that the planetary system would be similar to ours. YMMV.)

I can address the part of the question that states "have 'few or no' galaxies, but I can't find much else".

In recent years there has been a lot of work published on void galaxies. Identifying void galaxies is not easy: you first have to find voids and then you have to be able to establish whether a galaxy is or is not located in one of those voids. One way of doing this is to use a geometric definition of a void as described in this paper: https://www.astro.rug.nl/~weygaert/vgs_jenam_weygaert.col.pdf

(I am a member of the Groningen Group, led by Rien van de Weygaert, who are responsible for that work, but I am not a co-author). The "void galaxies" found in this way are truly isolated and not selected by virtue of brightness or surface brightness, so it's a fairly objective sample. This sample of void galaxies was studied in the following papers (more technical): https://arxiv.org/abs/1204.5185 https://arxiv.org/abs/1410.6597

Given the difficulty of finding even these galaxies, it is unlikely that we could find isolated stars or planets, even in our "Local Void" - we lie on the border of that.

This picture is a slice through a 3D reconstruction of the density field in a relatively small volume surrounding our galaxy: 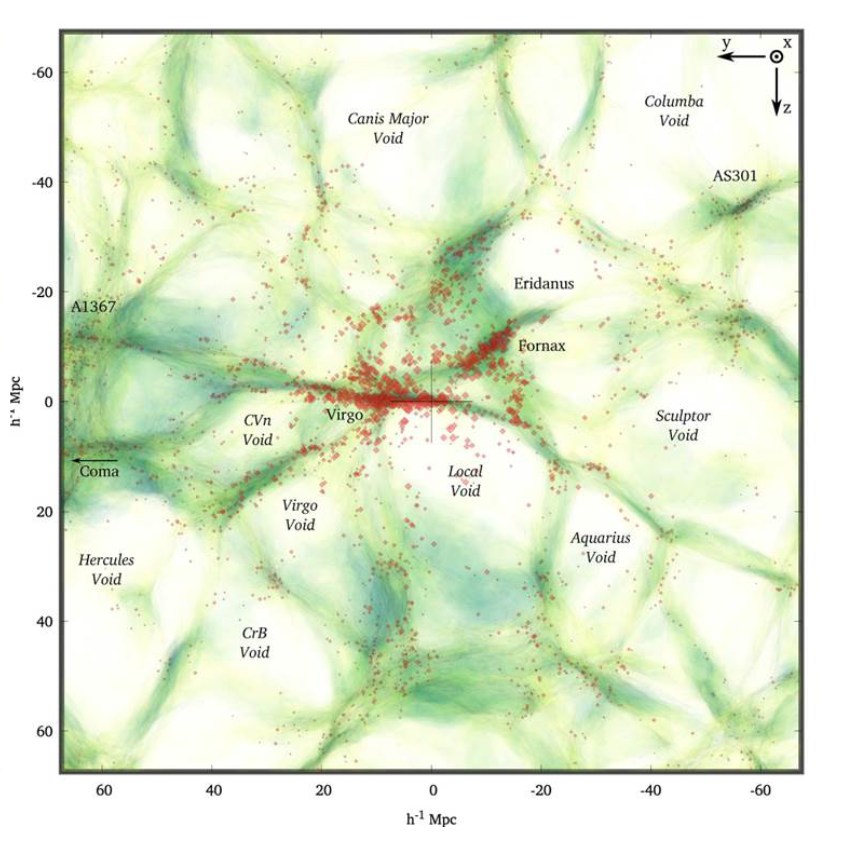 The slice cuts through a large number of voids, some of which we can identify from ealrier discoveries. The voids are indeed almost empty of galaxies. The image is the work of Johan Hidding, a member of the Groningen Group. See the paper: https://arxiv.org/pdf/1611.01222.pdf

Apart from what you read in Wikipedia, nobody knows. All the things you mention could be in there, but these voids are just too far away to detect them. Commonsense dictates that like the rest of space, they must be seething with neutrinos, photons & other particles. QM mechanics will also tell you that space,including the voids,is seething with virtual particles.

At the risk of being condemned for heresy, I have to admit that so far as virtual particles are concerned, I'm an atheist. I also have a suspicion that in some of these voids; the Boötes void for example, there is something mysterious in there or has passed through there to create the void, but that is speculation.

Not the answer you're looking for? Browse other questions tagged asteroids rogue-planet intergalactic-space interstellar or ask your own question.

18
What is there in the intergalactic space?

18
What is there in the intergalactic space?
6
What would the night sky look like if Earth orbited an intergalactic star?
4
What would happen if a rogue planet hit one of the planets in our Solar System?
3
When would Oumuamua have entered the solar system?
4
Is it likely that intergalactic stars would still retain their planets?
7
What would happen if asteroid 99942 Apophis collides with the earth?
10
How well would the Moon protect the Earth from an Asteroid?
2
What makes scientists already so certain that Comet C/2019 Q4 (Borisov) is a comet and not an asteroid?