Draw the celestial sphere for latitude, showing the star Sirius, Estimate the approximate date when Sirius rises with the Sun

I'm having trouble understanding how to solve a certain problem.

The problem is from the book Astronomy: Principles and Practice by Roy and Clarke. It is actually a solved example, but I am unable to understand parts of the solution.

Draw the celestial sphere for latitude 30° N, showing the star Sirius (right ascension 6h 40m, declination 17° S) at rising and draw the ecliptic. Estimate from your diagram the approximate date when Sirius rises with the Sun. 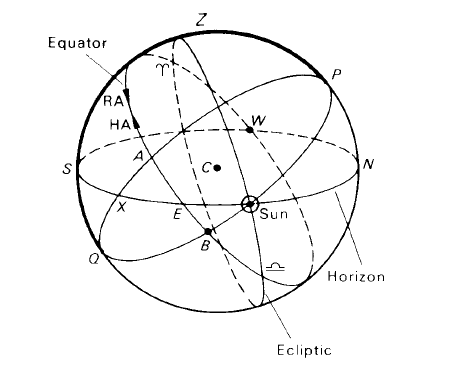 This is the image from the solution. I'll copy the entire solution.

Now, here's what I don't understand. If Sirius is at X, and if X is on a parallel of declination, why isn't this parallel parallel to the equatorial plane? Does the same go for the Sun? And how do we get the RA of the Sun?

The figure doesn't show the -17° parallel of declination. If it were shown, it would be parallel to the equator as you expected, as would the parallel of the Sun's declination. PAQ and PBQ are semicircles of right ascension, intersecting at the celestial poles P and Q.

For an interactive aid, try Stellarium. You can highlight the meridian, equator, ecliptic, etc. in the View > Markings dialog. Under View > Sky, orthographic projection renders the sky as a celestial sphere, mirror-reversed from the book figure. To reproduce the problem scenario, set a location at 30° N and a date of...July 24. The Sun's right ascension on that date is closer to 8h10m.

The authors don't explain how they determined an RA of 8h40m for the Sun, and they're off by half an hour; maybe they eyeballed it as 30° east of Sirius in the diagram. The Sun's RA is exactly 0h at the March equinox, 6h at the June solstice, 12h at the September equinox, and 18h at the December solstice. Between those milestones, the Earth's orbital motion makes the Sun's RA increase about 4m per day or 1h in 15 days.

The the image does not display the parallel of declination that X is on.

The only declination line shown in the image is the equator. The two arcs shown intersecting at X are the observer's horizon (NWSXE) and the Right Ascension/Hour Angle arc passing through Sirius (PAXQ).

I'm afraid I'm not sufficiently familiar with the methods in the mentioned book to work out how the Sun's Right ascension was determined from the answer snippet.

1
What are the correct symbols for vernal and autumnal equinox?

9
If we were to see the Sun with our naked eyes from the Orion belt, would all planets be encompassed inside the star? Is this calculable?
1
When exactly star Sirius shines into the queen's chamber of Great Pyramid?