Why do things float in space, though the gravity of our star is always present? [closed]

In the solar system, things float around. We are so certain that the gravity of our sun exists. Still, why does that gravity not influence satellites and other objects there?

Our solar system is also orbiting the center of our galaxy, and the gravity of our black hole, but still many objects float around. I wonder why.

It is not true that "objects float around" in the solar system.

To help with James K's excellent answer, a visual representation might help. Let's look at a thought experiment - Newton's Cannonball.

Let's say you have a cannon, high enough that it's being held above Earth's atmosphere.

You fire it, and it falls to Earth a little ways away ("D" in the below diagram).

You fire another one with more power so it's moving quicker, so that it falls to Earth farther away. ("E" in the below diagram) 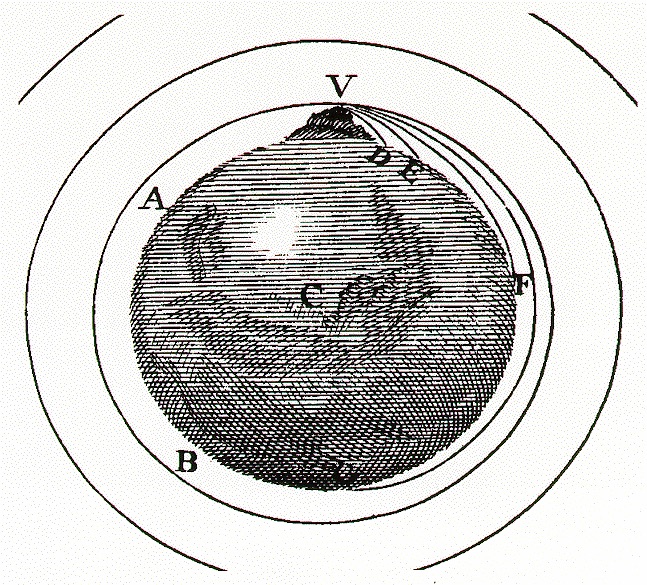 Eventually, you fire a cannonball with such extreme velocity, that it's "falling" around the Earth fast enough that it never reaches the ground.

This is orbit. Orbit isn't necessarily being really high up and moving slowly. More often than not, orbit is going sideways fast enough that you're falling without losing height.

So, why on places like the ISS, does it look like things are just floating around? Let's quickly go back to the cannonball.

The ISS, similarly, is traveling about 7.66 km/s, or around 27,600 km/h (about 17,150 miles per hour for those using imperial measurements). It's going fast. But when you're on there, everything is going the same speed, because you're all on the ISS together.

These are all hard to comprehend speeds - we can all agree though, that this isn't just floating around. Things are moving fast.

Things can appear to be just "floating" because their relative velocity to the observer is small. But I hope this all gives an explanation of how just because something appears to be slowly floating around, that doesn't mean it's not still moving fast from a different point of view.

Ok, gotta quote XKCD on this.

This is not how space works:

Gravity in low Earth orbit is almost as strong as gravity on the surface. The Space Station hasn't escaped Earth's gravity at all; it's experiencing about 90% the pull that we feel on the surface.

To avoid falling back into the atmosphere, you have to go sideways really, really fast.

The reason things in space tend to stay in space, or why things "float" in the international space station is because they're going so fast gravity doesn't do anything more than keep those objects moving around the planet: the parabolic trajectory that all falling objects have is so wide that it misses the horizon and comes back around again. Aka, orbit. As the space station and all of its contents are moving at the same speed, and are in constant in free fall, things appear to float: there's no object at rest for things to fall towards; everything is falling and everything is falling at the same speed, all the time.

If the ISS had an arm long enough1 and someone put something perfectly still in the center of the space at the far end, that object wouldn't stay there. It would be ever so slightly off the orbital path that the station would either catch up to it, or fall away from it. But it would be very, very slow. And it would happen because the ISS as a whole and the "floating object" would be in slightly different, intersecting, orbits.

Still, why does that gravity not influence satellites and other objects there.

It does. It just isn't very strong. Gravity falls off at an inverse-square relationship with distance, just like light does. Except that gravity is way way weaker of a force than electromagnetism is ("no its not, I can feel the Earth right now!" Yes, and the Earth is a few trillion-trillion times heavier than you are, how about a table? Can you feel the table's gravity?). The gravitational acceleration towards the sun is on the order of about 0.005m/s2 (and that's still 50 million times greater than the gravitational pull from all the spiders everywhere).

The real answer is that, locally (strictly speaking, in an infinitesimal region), gravity is not a thing. Whatever your movement is relatively to earth or the sun (even without going "fast to the side" as previously stated), you won't feel any gravity in a local experiment. Even when forces enter into account (like air friction or the reaction of the ground), you can't say without looking at the window if you're act on by gravity or inertia coming from, say, thrusters from your rocket.

This is the equivalence principle, the one responsible for the miracle that astronauts in the ISS and the ISS fall at the same rate, leaving astronauts weightless, in Newton's theory, through the dubious force = mass x acceleration and gravitational force = mass x gravity field, hence m a = m g, so a = g for any mass.

Newton himself knew that the strict equality between inertial and gravitational masses for any body, whatever its mass, composition or whatever, could not come from something random. This laid the groung for general relativity.

Not the answer you're looking for? Browse other questions tagged gravity solar-system supermassive-black-hole or ask your own question.