Why is this Einstein ring pink?

I'm having a hard time understanding this image in the CNN News item This glowing ring of light is from a distant galaxy.

The caption (from this version of the article) says:

This image shows observations taken with the NASA/ ESA Hubble Space Telescope of two magnified galaxies behind massive galaxy clusters: the pink glowing haloes reveal the gas surrounding the distant galaxies and its structure. The gravitational lensing effect from the clusters multiplies the images of the galaxies, producing up to 4 images of the same source.

Trying to parse the caption, I think that the two objects in the center are magnified images of the galaxies in the background, and so should be related to the source of the light in the Einstein ring. But they are yellow and the ring is pink.

Question: So the Einstein ring is picking up light not from the background galaxies, but from a halo of gas around them? Is there a better source to read about this image and everything that's going on here?

The image contains the following label at the top right corner: 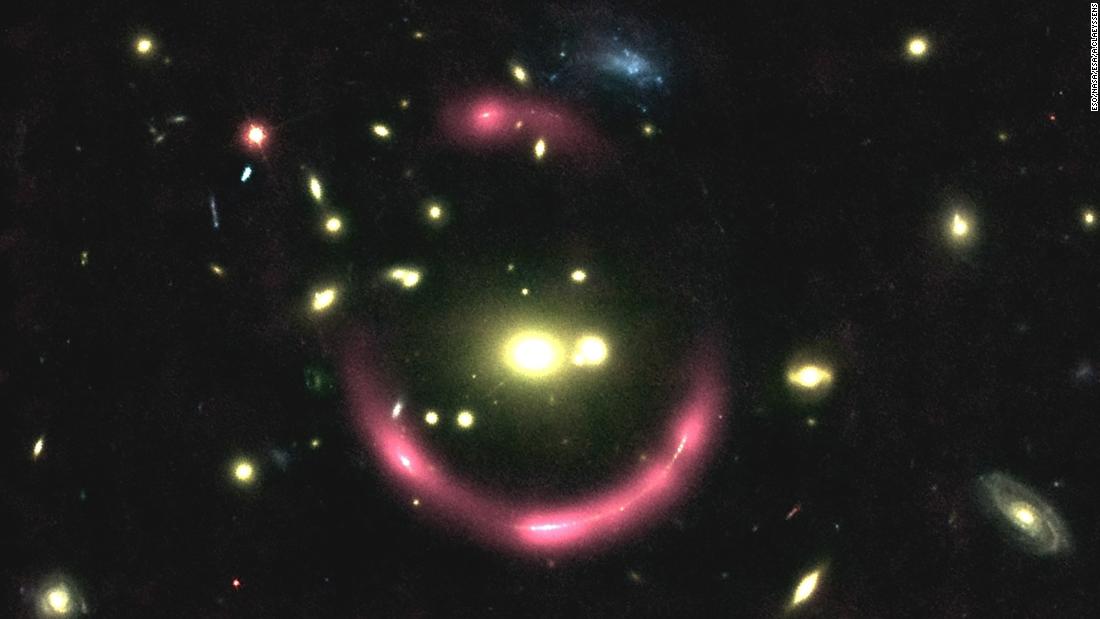 The article then says:

The MUSE instrument on the European Southern Observatory's Very Large Telescope has identified halos around distant galaxies. Previously, images of these glowing rings lacked detail, but astronomers were able to use a gravitational lensing effect of galaxy clusters to see detail and structure.

Gravitational lensing occurs as an effect of Albert Einstein's theory of general relativity: mass bends light. So the gravitational fields of galaxy clusters bend light, acting like a magnifier of the galaxies behind them.

The best observations of the halos by MUSE were released Monday, presented by Adélaïde Claeyssens during the annual meeting of the European Astronomical Society in Lyon, France. Claeyssens is a Ph.D. student at the Centre de Recherche Astrophysique de Lyon.

Which further confuses me because the caption mentions Hubble but the article mentions data from MUSE at the VLT. I wonder if the image is a file photo and only peripherally related to the content of the news article?

OK, guessing rather wildly in the absence of solid information....

The press-release page is here; that provides a bit more information than the news article, and includes two images of (different regions of) the cluster and a hint that the cluster is named MACS0940.

I think the main image is a color composite from HST imaging. It shows a galaxy cluster (the yellow galaxies). Also visible is light from an Einstein ring, the gravitational lensing by the cluster of a (single) distant background galaxy. The thin, white, ringlike streaks within the pink arcs are the stellar light from this galaxy (probably UV light from massive, recently formed stars); the broad pink arcs themselves are (I'm guessing) the Lyman-alpha emission as seen by MUSE. (So the image is a composite of both HST data and MUSE data.) Thus it is plausible to say that the Einstein ring is made up of stellar light from the background galaxy and (in pink) emission from gas in and around that same galaxy; the assumption is that said gas is mostly in a halo around the galaxy.

The second "magnified" galaxy referred to in the news article is probably in a different part of the cluster, and doesn't form a nice Einstein ring; it is presumably the four pink blobs in the second image on the press-release page.

This is the abstract for an HST proposal on which Claeyssens was a co-I; the data were taken on May 1, 2019, so it's plausible the image is from those observations:

Not the answer you're looking for? Browse other questions tagged galaxy-cluster gravitational-lensing or ask your own question.

6
How did VLT's adaptive optics obtain this resolution for Neptune? Is it really working in visible wavelengths?