What causes these asteroid trails to be so strangely shaped and repeated?

The Phys.org news item Hubble is the ultimate multitasker: Discovering asteroids while it's doing other observations includes the image below.

What causes these asteroid trails to be so strangely shaped and repeated? Usually asteroids appear as short straight segments in long exposures from terrestrial telescopes. 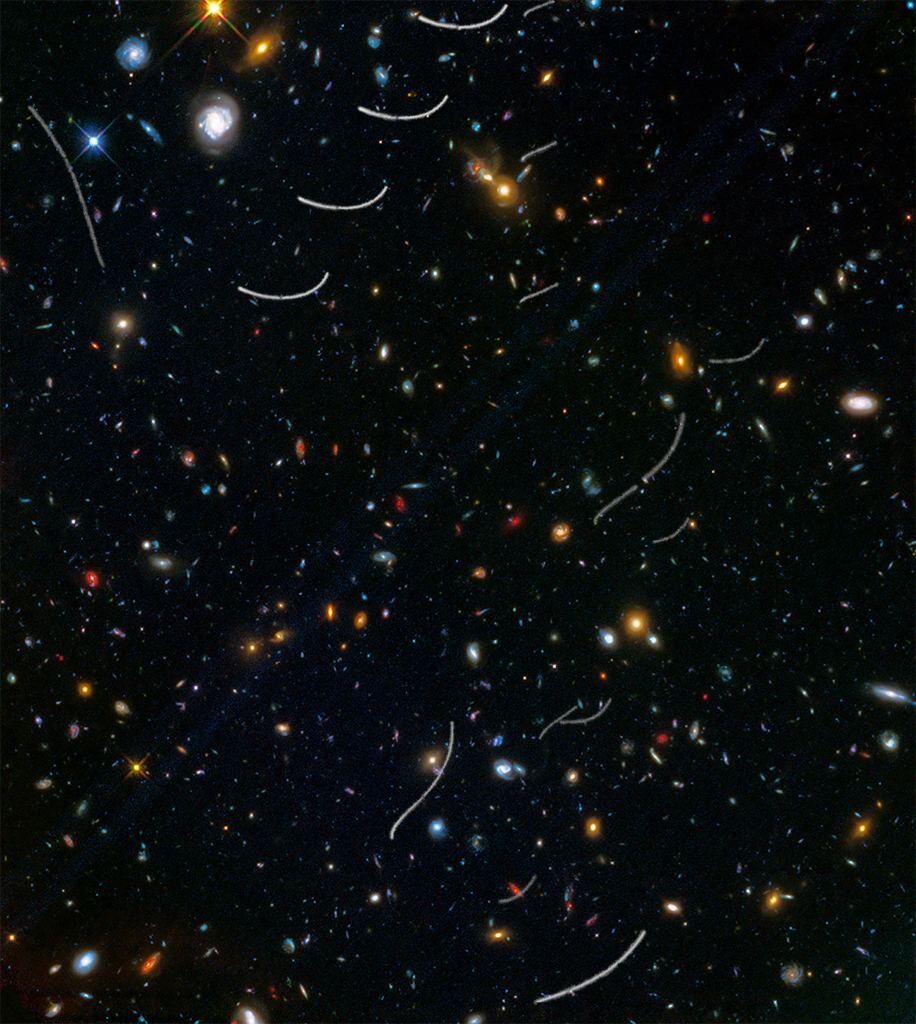 Some asteroids from within our Solar System have photobombed deep images of the Universe taken by the NASA/ESA Hubble Space Telescope. The asteroidal streaks in this image are created by our virtual neighbours; asteroids in the main asteroid belt between Mars and Jupiter. In the background are thousands of colourful galaxies, some of them billions of light years away. Credit: NASA, ESA, and B. Sunnquist and J. Mack (STScI); CC BY 4.0; Acknowledgment: NASA, ESA, and J. Lotz (STScI) and the HFF Team

What causes these asteroid trails to be so strangely shaped and repeated?

The linked image is a composite of several long duration exposures captured by the Hubble Advanced Camera for Surveys of the same region of the distant sky. Each individual exposure was about ~2200 seconds long. Nearby objects such as asteroids would have been subject to the proper motion of the asteroid with respect to the Earth and parallax due to the Hubble being in orbit about the Earth during those ~2200 second long exposures.

Each individual streak comprises both proper motion and parallax effects. The parallax effects are what make the streaks have a nonlinear shape. One orbit later (~5725 seconds), another ~2200 second long exposure showed a similar path for the same asteroid, but shifted a bit because of the asteroid's proper motion. This is why the composite image shows twenty streaks (per the linked article; I see sixteen) for only seven asteroids.

The asteroids leave corkscrew shaped trails which are interrupted by not recording when the Earth passes through the field of view. The corkscrew shape echoes the path of the telescope moving around the Earth as the Earth moves around the Sun. The straighter trails you are familiar with are merely zoomed-out versions of the same -- asteroid hunting needs long exposures but not high magnification.

I've accepted the other answer. Then I ran across this article so I'm posting this as a supplemental answer.

It turns out that at the bottom of the Phys.org article there was a link to another, older article Image: Dance of the asteroids which did contain an explanation, as well as another image:

The asteroid trails look curved due to an observational effect called parallax. As Hubble orbits around Earth, an asteroid will appear to move along an arc with respect to the vastly more distant background stars and galaxies. The motion of Earth around the Sun, and the motion of the asteroids along their orbits, are other contributing factors to the apparent skewing of asteroid paths.

All the asteroids were found manually, the majority by "blinking" consecutive exposures to capture apparent asteroid motion. Astronomers found a unique asteroid for every 10 to 20 hours of exposure time.

These asteroid trails should not be confused with the mysterious-looking arcs of blue light that are actually distorted images of distant galaxies behind the cluster. Many of these far-flung galaxies are too faint for Hubble to see directly. Instead, in a dramatic example of "gravitational lensing," the cluster functions as a natural telescope, warping space and affecting light traveling through the cluster toward Earth. 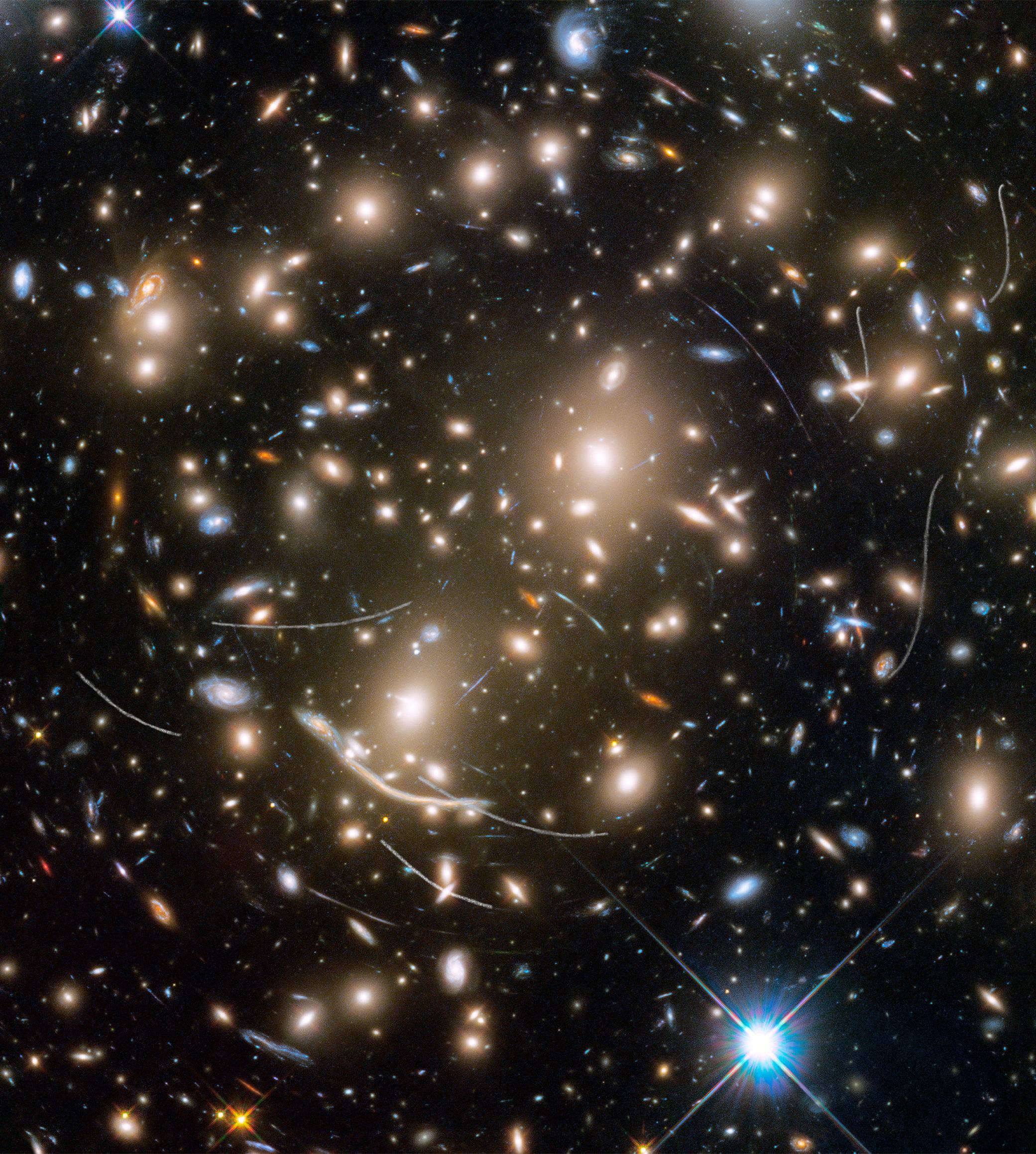 Not the answer you're looking for? Browse other questions tagged asteroids hubble-telescope deep-sky-observing or ask your own question.

1
How are "parallel fields" implemented on the Hubble Space Telescope?
2
How close to Earth were the asteroids moving through this Hubble composite image?

4
Collision of asteroid and gaseous planet - what would happen
10
Is this object an asteroid or comet, and how can it produce so many tails?
4
What are the maximum and minimum impact speeds for an asteroid that would strike the Earth?
4
Solar Wind and Asteroid orbital behavior
4
Are asteroid complexes and types the same?
2
What star was the asteroid 2014 MU69 predicted to occult on 2018-08-04?
3
I've seen some stars tonight. What could I possibly have been looking at with these pictures?
7
What would happen if asteroid 99942 Apophis collides with the earth?
1
How are "parallel fields" implemented on the Hubble Space Telescope?
7
What is the difference between a depleted comet and an asteroid?