The Kepler space telescope detects planets based on the dip in brightness caused by planets moving past the star.

Wouldn’t that mean that there are an unknown amount of planets that have an orbit that wouldn’t be detected because their orbits don’t cross that path between the star and the telescope?

That's right. The inclination of the orbital plane around stars is considered to be random throughout the galaxy, thus the planets we can detect by the transit method is just a tiny fraction of the planets that we should expect in our stellar neighbourhood.

The transit method allows for planetary detection only when the line of sight from Earth to the system is contained, or almost contained, in the orbital plane of the planet. This means that only a tiny range of orbital inclinations on each star are good for detection.

Why did I say almost? Because there is some range of inclinations that still would yield a transit. This range is not fixed, and it depends on the distance of the planet to its host star. As you can see in this diagram: 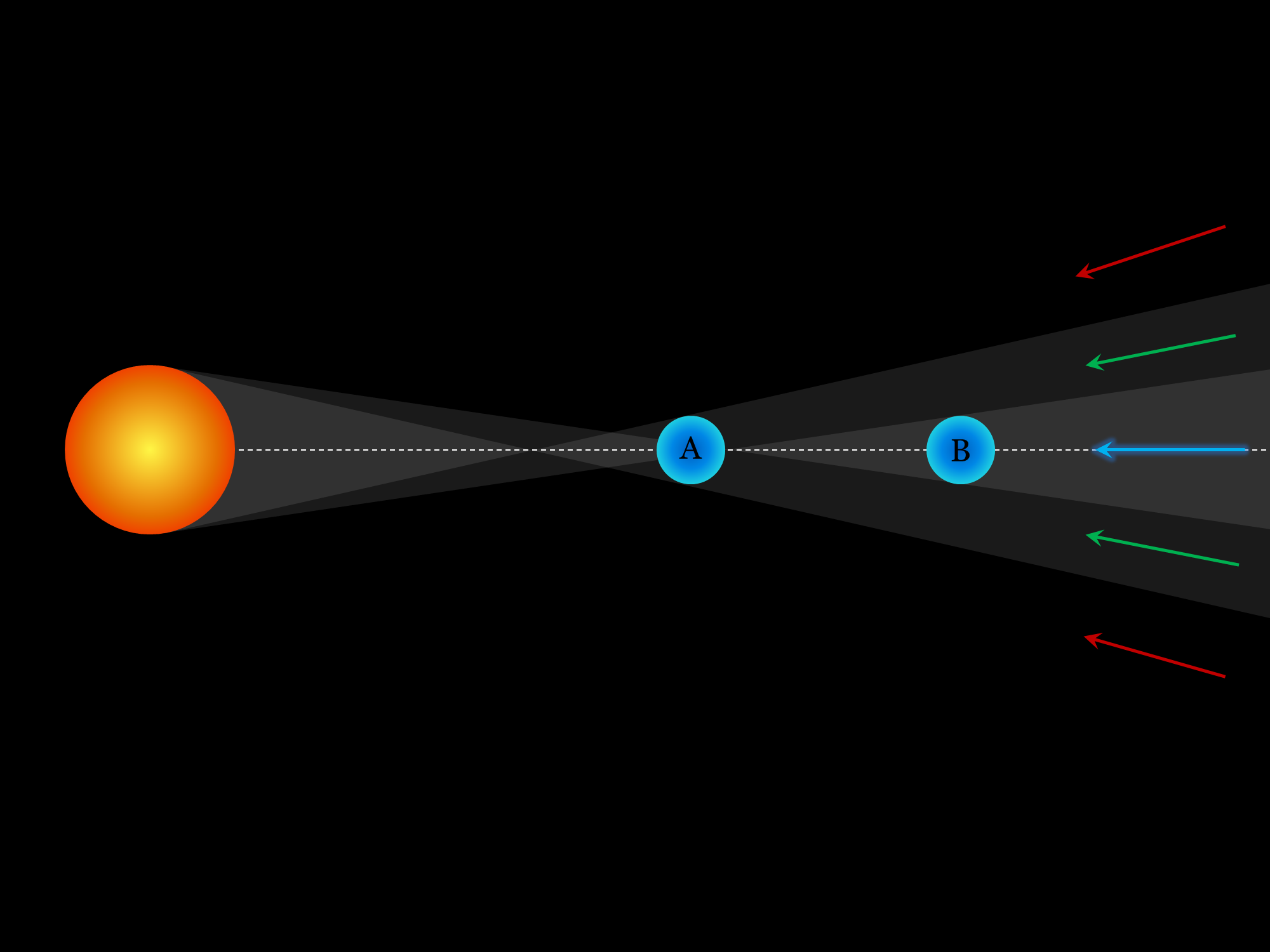 Planet A is closer to the star and thus creates a wider shadow. If an observer is located in that shadowed region far away it can detect planet A. Planet B instead is farther from the star and thus its shadow is narrower. It is interesting to note, that even if both planets here share the exact same orbital plane there are places from where you would only detect planet A and never detect planet B (see the green arrows). This is the reason we have a bias towards planets orbiting closer to their star.

This effect is in fact quite strong: consider our Solar System from an exoplanetary perspective. If you were located in a random star in the sky, what are the chances you would spot an Earth transit? Well, it turns out that it is way more probable to detect a Mercury transit, even if Mercury is the smallest planet, just because of its vicinity to the Sun. A recent paper showed this diagram of the regions of the sky where some alien inhabitants would spot a transit for each of our planets: 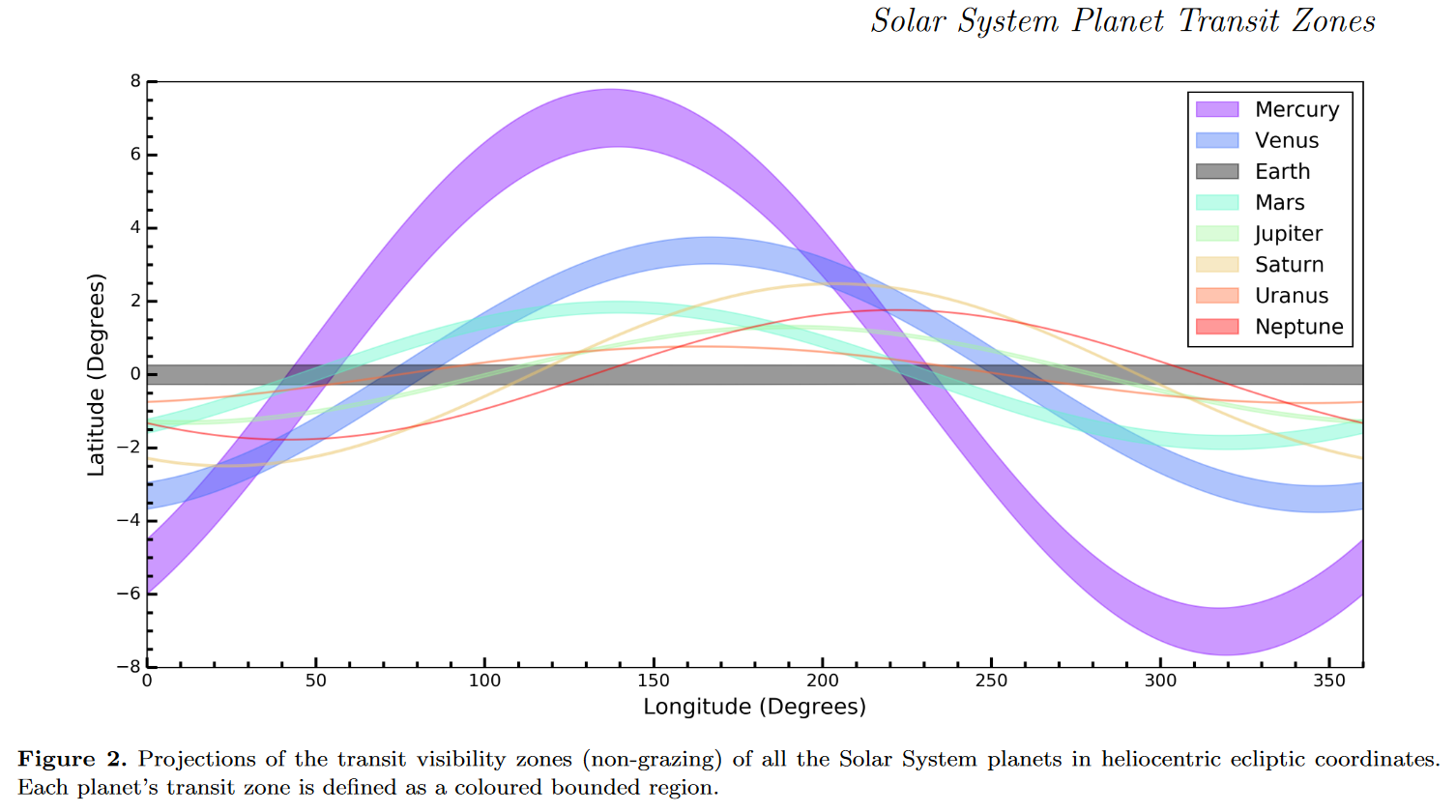 As you can see Mercury has the wider strip. Also it's interesting to note that due to these differences in the size of the orbits (let's use the semi-major axis, $a$, as a reference) and due to small differences in orbital inclinations there is no place in the entire sky from which an alien could detect simultaneously more than four of our planets by the transit method. No place in the universe where all the Solar System's planets would be detectable.

The detection method also depends on the relative sizes of the star, $R_s$, and the planet $R_p$: A larger star has a larger disk (as viewed from Earth) that can be easily photobombed by a planet and a larger planet can photobomb more easily if it is larger. 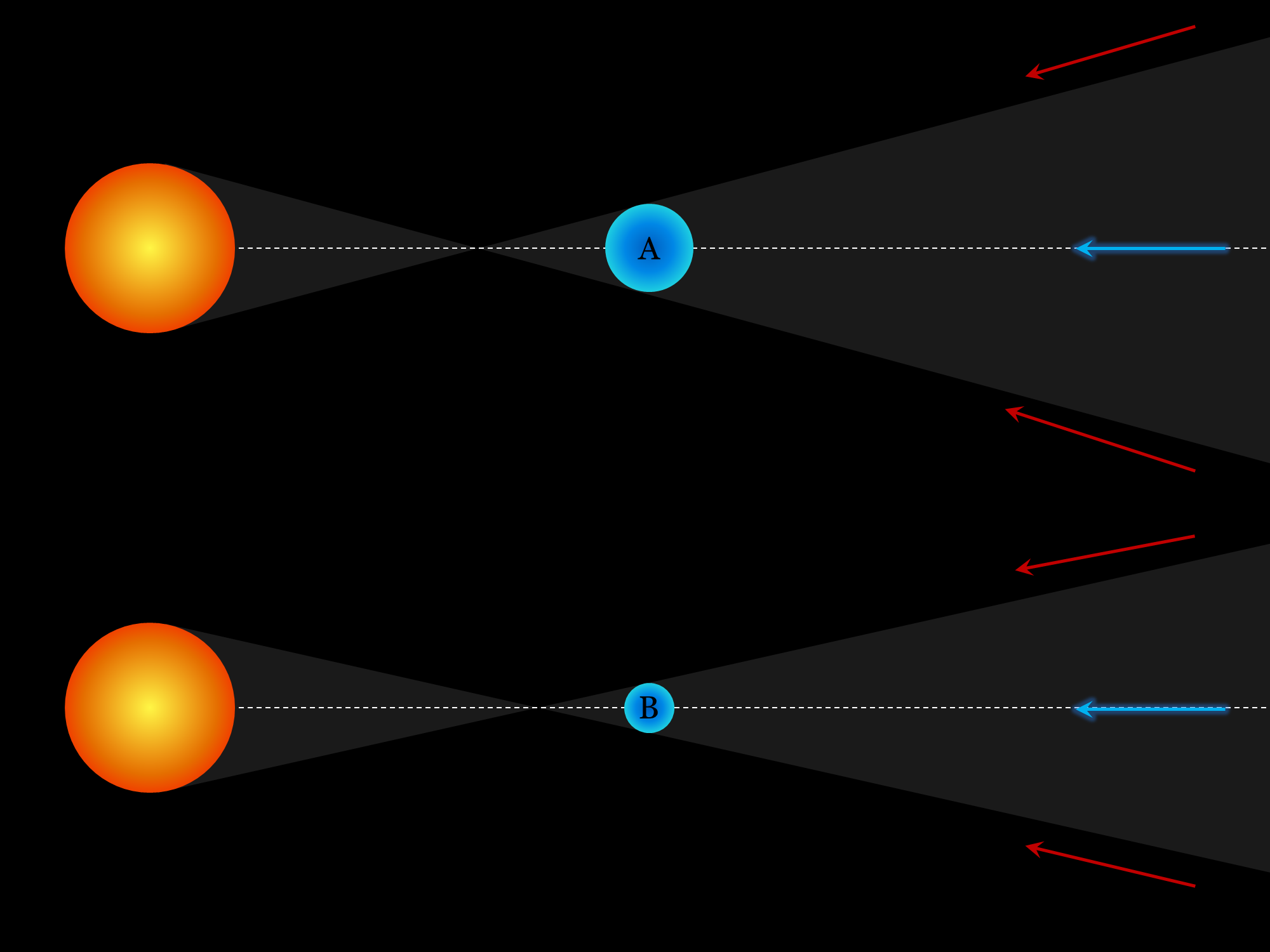 The result is that the probability of detecting a planet increases as we increase both/either $R_p$ and $R_s$ and increases as we decrease the distance to the host star $a$. The relation is then of this form:

This relation imposes several observational biases. We can see exoplanets that are large and closer to their star, but we can't see planets that are small and farther. That is the reason the first detected exoplanets are the so-called hot Jupiters: giant planets much closer to their stars than Mercury is to the Sun. This diagram shows all the exoplanet detections plotted on size vs. orbital distance: 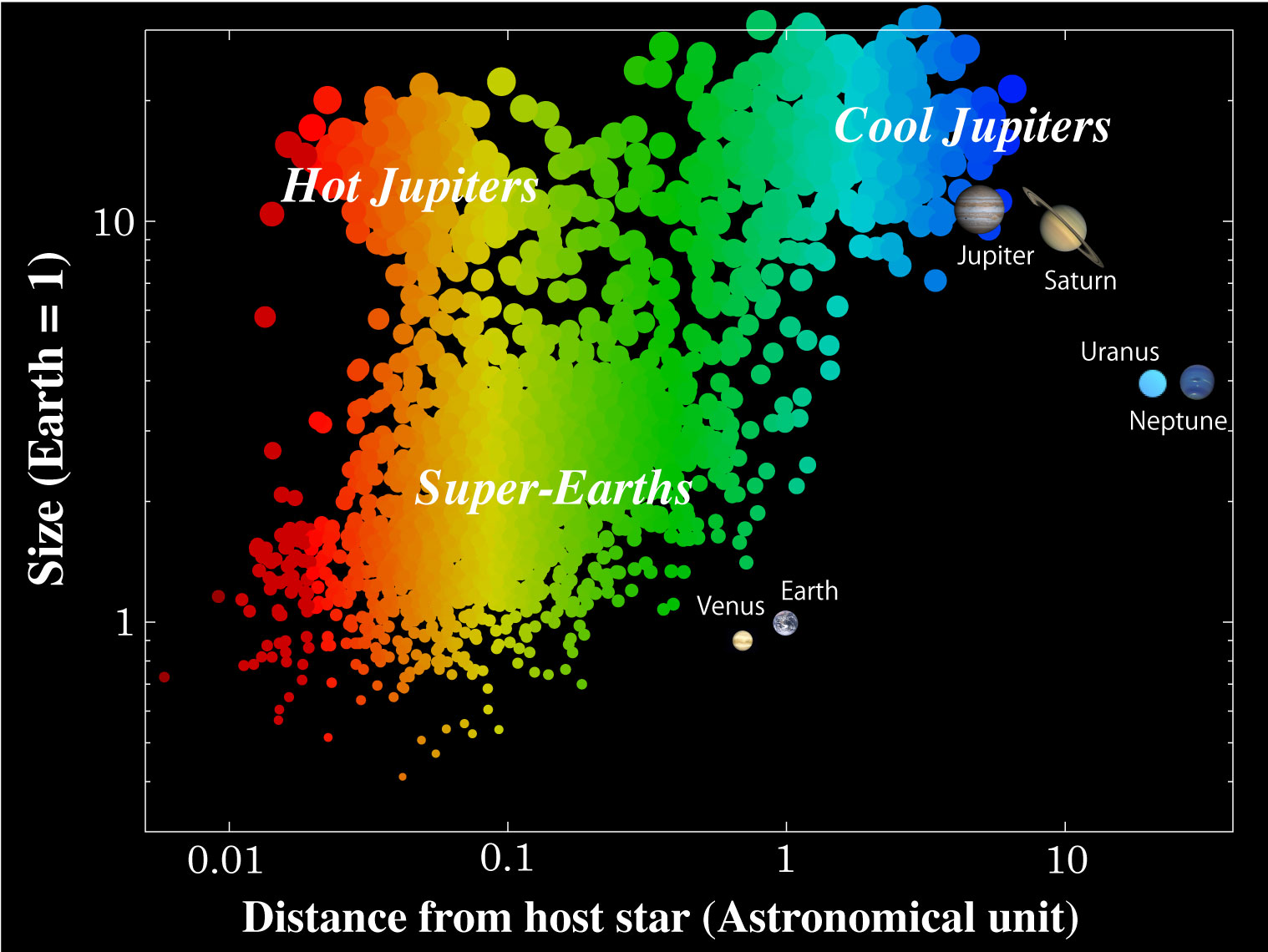 As you can see, small planets are only detectable if they have very small orbits around their stars. We have yet to find a planet the size of Earth (quite small) and with a 365 day orbital period (1 AU distance) using the transit method. There is no reason to think that this is representative of the overall population of planets. The black region of the plot is probably filled with dots, but our instruments can't scout that region yet.

The Kepler telescope had a camera with a field of view on which it could detect more than half a million stars, but the actual number of stars monitored during the mission was around 150,000 stars (these stars had good signals and were perfect targets for the mission). For these 150,000 stars Kepler found 2,345 exoplanets distributed in 1,205 stars. So we can say that for each star targeted by Kepler, the average probability of finding some planets there is around $0.8\;\%$. That should give you an estimate of the occurrence of orbital inclinations that result in transits.

The truth is that this number is too small, because Kepler has several more biases. For example, Kepler only confirmed planets after three transits were detected. Since the Kepler mission lasted for four years and four months we can say that in the best case scenario Kepler was able to detect a planet with an orbital period as long as two years and two months, but this is not even the case since for that to happen a transit should have been detected just at the beginning of the mission, halfway, and at the exact end of it, and this coincidence didn't happen. Thus Kepler had no chance to discover any planet with periods longer than two years (enough for Earth, but not enough for our Jupiter for example), even if the orbital inclination matched perfectly for the transit. So you might expect more possible transits than those actually portrayed by the Kepler telescope.

In fact, for planets close to their stars, it has been estimated that the probability of a random alignment to allow a transit gets up to $10\;\%$. For the case of stars as big as our Sun and planets at the same distance as Earth, the probability of this random occurrence drops to $0.47 \;\%$. So with all the diversity of planets (in terms of sizes and distances to their host star) it is reasonable to expect a $0.8\;\%$ detection rate for Kepler (if we also add the time restriction to observe three transits).

This kind of reasoning has been expanded. We have many difficulties to detect them, but if you mathematically model that difficulty and the corresponding biases associated with the known instruments and you assume random configurations, you can see that each discovery yields statistical significance to the amount of possible planets that are really out there. There are so many detections now that we can finally establish with statistical confidence that there are more planets than stars in our galaxy (even if we have probed an infinitesimal fraction of the entire population), even if this was something that could be expected we have now strong evidence for that thanks to Kepler. This means that there could be around a trillion or more plants just in the Milky Way. Now we are also able to establish some statistical constraints on the occurrence of Earth-like planets (orbiting in the habitable zone of their sun-like star) thanks to Kepler. There are probably around 11 billion planets in our galaxy with these specifications.

There are many more planets than the ones we can detect by the transit method, between 10 and 100 times more depending on the size and orbital period of the planet you are searching for.

The probability of a transit taking place is something like $r/a$, where $r$ is the stellar radius and $a$ is the radius of the planetary orbit.

If you assume that planet orbits are randomly inclined to our line of sight, then each detected planet corresponds to $a/r$ planets in actual fact.

Note that this approximation is ok for circular orbits where $r \ll a$ and where the planetary radius is much smaller than the stellar radius. Much more complicated expressions are required (and of course used) in planet population analyses.

The final bit of detail that can't be captured by a simple equation are the chances of capturing the transit because of limited cadence or duty cycle of the observations.

Even for a mission like Kepler there comes a limit when the duration of the transit may only cover one or two observation points, and it becomes difficult to discern a transit. Ditto of course if the mission duration only covers a single transit so that the planetary nature cannot be confirmed.

These kinds of effects are important at larger $a$, where planets have longer orbital periods and shorter transits.

Finally, you have to take into account the signal to noise ratio of the observations. Smaller planets around fainter stars produce transit signals that are harder to detect.

These issues can (and are) only be dealt with by making simulations of the observational data.

19
How do/did we figure out that planets move in orbits?
11
What might cause a planet to have a significant tilt in their orbit?
4
What decided how the Kepler space telescope was pointed?
3
Likelihood of extra planets in systems identified by Kepler?
2
What telescopes have observed anomalies in the light curve of Tabby's star, KIC 8462852?
6
Has star KIC 8462852's 3 year long Kepler-fading continued after the primary Kepler mission ended?
2
Mean and true Sun
4
Detecting habitable planets