How would water-ammonia oceans behave?

Scientists strongly suspect that several moons in our solar system have frozen-over oceans of water-ammonia mixture. I've also read speculations on the possibility of surface water-ammonia oceans on exoplanets and exomoons. What I haven't seen a lot of is a discussion on how those oceans might behave differently than the water oceans of Earth.

I'd like to know if this has been studied and if these behaviors have been described in papers, books, or in-depth articles on this topic. Especially anyting that goes into the specifics of the water/ammonia ratios.

I'll add some personal speculation here. While it is not part of the primary question stated above, it helps to explain the type of problem I'm trying to understand, so may be helpful to narrow down which resources may be most useful.

If my speculation is correct (and I could be wildly wrong since I don't yet understand how a mix of water-ammonia actually behaves) then an exoplanet with an equatorial band of water-ice, mid-latitudes of liquid ocean, and solid polar-caps/continents of water/ammonia ices could be possible. The ammonia in the ocean would evaporate more quickly near the warmer equator, causing that area of a global ocean to have a greater ratio of H2O, and the ammonia precipitation and ocean might freeze at the poles, causing the build up of vast polar continents of ammonia/water ices. I would imagine the currents would function very differently than on earth, with surface and deep-level currents of varying ammonia-water ratios and temperatures. I I also see the possibility of frozen ocean beds in the more ammonia-heavy parts of an ocean, with the surface unfrozen.

Of course the ratio of ammonia to water will be very important. I'd love to see specific information on that!

It's a big question, but kind of a favorite subject of mine, thinking about exoplanets, so I can give a ballpark answer, and I invite anyone to give correction or give a more technical answer if they like.

That said, oceans are likely to have dissolved salts in them, especially on rocky worlds that have a very high rock to water ratio. A water world might have much less salty oceans, but, lets not get too sidetracked.

If there's enough dissolved salts or iron in the water-ammonia mix, then the density might be sufficient that water-ice could remain on top. Ice tends to form out of nearly pure water, with very little ocean salt, which increases it's buoyancy. It's possible, with enough saltiness, that ice could form in an ammonia-water ocean. It's also possible that ice would sink.

I want to point this out now, because it's important. Using our oceans as a model, higher salt concentration sinks. 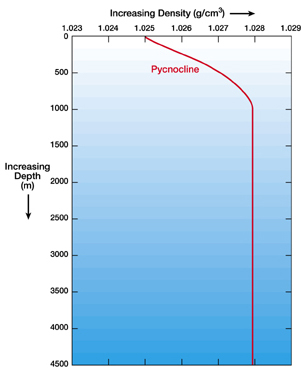 That's kind of common sense and is likely to happen with a water-ammonia ocean as well. Higher ammonia concentration near the surface, higher water (and higher salt) concentration as you go lower. That's speculation on my part, but it seems reasonable.

Varying ratios of water-ammonia based on temperature or other factors

Higher water concentrations would sink and higher ammonia concentrations would rise and flow towards the lower. That's simple physics. Like on Earth, the variation of salinity of surface water isn't all that much. The same thing would likely happen with an ammonia-water ocean, the surface currents would try to equalize the different ratios. There would be some variation, but likely not as pronounced as the variation with depth. You're not likely to get a 90% water ocean in one region and a 40-60 ratio in another region because gravity abhors an imbalance like that. The 90% water region would be heavier and as a result, lower. You can have that kind of density imbalance with a solid crust, but not a flowing ocean.

The varying density of the ocean is important for another reason. On Earth, the salinity being relatively consistent across the ocean surface, the cold polar ocean is more dense and it sinks, and this is what's thought to drive the oceanic conveyer.

There's a range of uncertainty on whether an ammonia-water ocean would conveyer or not. You'd need a sufficient temperature and/or density variation, keeping in mind that if you begin with a ratio imbalance the ocean would work to correct it, so the planet needs an engine to maintain the conveyer. On Earth, that engine is the warm equator and cold poles. Different planets would have different temperature variations. Venus, for example, has practically no temperature variation at it's surface.

I looked, but couldn't find a table on ammonia-water solution by temperature. That would be a factor if anyone can find it.

Ammonia in water has a saturation point, based on temperature and pressure. If the ammonia-water solution exceeds that saturation point, say, on a hot day, then ammonia would bubble out of the ocean fairly quickly. Perhaps quickly enough to generate a weather system and trigger a density change, and in this case, warmer water sinking and a kind of reverse conveyer, driven by sinking water at the planet's warmest regions.

The phase transition, liquid to gas would remove heat from the water as well.

A planet with an ammonia-water ocean and a surface temperature that exceeds the saturation point could be quite dynamic.

If the planet is slightly colder and/or the ammonia percentage stays below the saturation point, then it's more of an equilibrium system. Water is a good solvent and it takes in many gases, such as CO2, in small amounts. Ammonia and Water, unlike CO2 and Water, mix very happily, so evaporation of an ammonia-water ocean below saturation wouldn't be that different to water on Earth, where evaporation is driven primarily by wind and sunlight. (contrary to logic temperature isn't as big factor in evaporation as direct sunlight). Wind is also a big player and on Earth, running water from rain or snow melt and transpiration from plants all return water to the atmosphere, which quickly rains or snows back to the surface. At any given time, Earth's percentage of water vapor in the atmosphere is about 1%, but it varies locally based on air temperature and relative humidity.

For example, to have ammonia raindrops at 1 ATM, the air temperature needs to be colder than -33 C because that's ammonia's boiling/liquification temperature. Unless the planet was really cold, a lot of the ammonia would just stay in the atmosphere, though, presumably the planet would have water-rain and that water rain would pull some of the ammonia back out and return it to the oceans. That's the equilibrium, and it's a complicated thing to try to calculate, but the question isn't just how fast would it evaporate, but also, how fast would it return and the return rate would depend on the method of return. Ammonia, being a gas at what we think of as normal planetary temperatures, means it would likely remain in the atmosphere as well, it wouldn't all go into the ocean. It would be some of both.

Perhaps over time, the ocean ratio and the rain-water/ammonia ratio would equalize, but again, that's just speculation.

I'd like to know if this has been studied and if these behaviors have been described in papers, books, or in-depth articles on this topic.

I don't know of any papers. Theoretical planetary formation is fun to think about, but to do it right, requires some pretty serious computer modeling. What I've read on the subject is much less ambitious than your question. Models are done on water worlds and on tidally locked worlds and on plate tectonics for different mass planets. I've never seen a study on ammonia-water oceans, but I think it's a fun subject.

Earth had to have fairly abundant ammonia at some point because it's one of the primary "ices" in comets. Comets are mostly ammonia, water, CO2 and CH4, with smaller amounts of other elements. It's worth asking where Earth's ammonia went. It may be more chemically reactive than the other elements. If Earth lost it's ammonia, other planets may lose their ammonia as well in the process of planet formation and the chemistry that goes with it. It's also possible that ammonia-water oceans are common, perhaps more common than the pure water oceans like the ones we have on Earth.

Perhaps time and better telescopes will tell us more about this subject.

Take my answer with a grain of salt as I'm a hobbyist.

Not the answer you're looking for? Browse other questions tagged exoplanet water surface terrestrial-planets or ask your own question.

3
Simulating oceans and ice sheets on other planets or moons?

4
How would water waves behave in partial gravity?
3
Do/did the asteroids contain enough water to create Earth's oceans?
3
How easy is it to mine water on Ceres?
3
Enceladus; why use the words "geysers", "jets", and "plumes" interchangeably?
4
How was water formed?
3
Any information on the salt content of Mars' atmospheric dust?
4
How to calculate the thickness of the ice crust on a frozen ocean planet/moon?
16
Is the water underneath Europa's ice cap potable?