Is there a theoretical maximum size limit for a star?

Some stars are simply huge. Eventually, though, wouldn't there be simply too much pressure or mass for the star to sustain itself? Wouldn't it eventually collapse into a black hole?

Is there a theoretical upper limit on the size of a star, and what is it based on?

According to current knowledge, yes. If the gas cloud is too massive, the pressure of the radiation prevents the collapse and the star formation.

The article Stars Have a Size Limit by Michael Schirber, it's about 150 Solar Masses. However, there's the Pistol Star, which is speculated to be 200 SM.

In the article 'Das wechselhafte Leben der Sterne' by Ralf Launhard (Spektrum 8/2013) there's a diagram with information that when the mass is over 100 SM, the star can't form because of radiation pressure. The exact value of the limit is not speculated in the article.

A decent part of this answer is based on the introduction to Kroupa & Weidner (2005), though I’ve obviously gone into a lot more depth on all of the references.

Our story starts, as do many concerning stellar astrophysics, with Sir Arthur Eddington. In his 1926 book, The Internal Constitution of the Stars, he derived the Eddington luminosity, the maximum luminosity $L$ a star of mass $M$ can reach (Chapter 6, pages 114-115). His derivation goes along the following lines:

III. As temperature and density increase towards the center of the star, so does the pressure due to the matter, $p_G$. Therefore, $\mathrm{d}p_G>0$. Furthermore, given that $P=p_G+p_R$, $\mathrm{d}p_R<\mathrm{d}P$. This means that $(2\text{e})$ yields $$\frac{L\eta k}{4\pi cGM}<1\tag{3}$$ which is the criterion leading to the Eddington luminosity. There are, of course, other ways of getting this criterion, but I thought I’d give Eddington’s original one, in all its mathematical glory.

Using a suitable mass-luminosity relation for massive stars, we can then establish the mass of a star at the Eddington limit. Eddington himself took it to be in the range of 60-70 solar masses ($M_{\odot}$), though today a value of somewhere around 120 solar masses is more appropriate.

$E_P$ is the pulsation’s energy, while $L_P$ is the rate of gain of pulsation energy and can be expanded as $$L_P=\overbrace{L_{PN}}^{\text{nuclear}}-\overbrace{L_{PH}}^{\text{heat leakage}}-\overbrace{L_{PS}}^{\text{progressive waves}}$$ Here, $L_{PN}$ represents the rate of energy gained, while $L_{PH}$ and $L_{PS}$ represent the rate of energy lost. All of the above quantities can be calculated through some relatively simple expressions (see Equations 9-12 and 15-22). The upshot of all this is that $K$ becomes negative at birth for stars greater than 60 solar masses. This can be figured out by writing $L_P$ and $E_P$ as functions of mass, $M$, and age, $\tau$.

Now, interestingly enough, the critical age ($\tau_{cr}$) can be written as a function of mass: $$\tau_{cr}=0.05\left(\frac{M}{M_{\odot}}-60\right)$$ where $\tau_{cr}$ is in millions of years. This means that a star of, say, 62 solar masses (to take the authors’ example) will evolve to a stable state in a quarter of a million years. We can also determine whether or not, in this time, the star’s instability will become too great and destroy it. It turns out that this is the case for stars with masses greater than 65 solar masses - putting the upper limit for the mass of a star at 65 solar masses.

Here is a graphical representation from their paper, Figure 1: 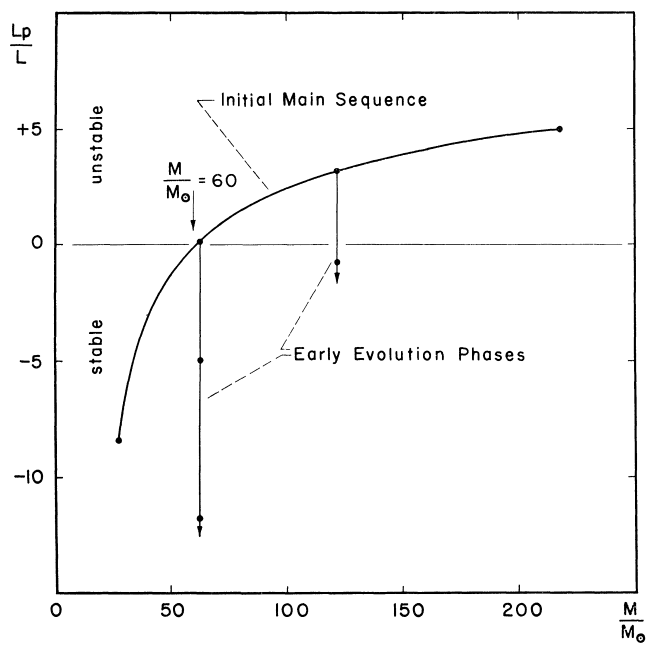 Even later work on the same topic was done by Ziebarth (1970), among others, who extended the models to study different metallicities and compositions (Schwarzschild & Härm) focused largely on stars with compositions similar to that of the Sun). His computations found a wide range of upper mass limits - 10 solar masses for pure helium stars, and 200 solar masses for pure hydrogen stars. Most stars fall in the middle, and so will have different limits.

The actual formation of massive stars also puts constraints on the mass. Kroupa & Weidner mention Kahn (1974), who studied how radiation pressure from a protostar could drastically lower accretion rates, stopping the star from continuing to significantly grow. As applied to a young Population I star, his simplest model comes out to a limit of about 80 solar masses, although different models of the “cocoon” yield different results.

I’ll add one final note on theory. Population III stars, the hypothetical first stars in the universe, are expected to have been extremely massive; as such, they would be excellent candidates for testing the upper mass limits. According to simulations by Hosokawa et al. (2011), mechanisms similar to those discussed by Kahn would have stopped accretion at stellar masses around 43 solar masses - a surprisingly low figure, given the expectations of how massive Population III stars should be. Additionally, as argued by Turk et al. (2009), sufficiently massive stars could fragment; in the case studied, a 50 solar mass star broke apart into two smaller core fragments.

Something I realized just now, a couple months after writing this, is that all of this assumes that the star is spherically symmetric. Most stellar models involve spherically symmetric, non-rotating stars, which allows us to make some assumptions such that the equations of stellar structure depend purely on $r$, the radial coordinate.

We have, however, seen stars - not stellar just simply stellar remnants like pulsars, but even main-sequence stars - that rotate rapidly and are thus non-spherical. Vega, for instance, has an equatorial radius 19% larger than its polar radius. If a star of mass $M$ is rotating, the equations of stellar structure should be different, and so some of the above results should also be different. I'm not sure how important this is for various theoretical limits.

The first order theoretical limit on stellar size is from the Eddington Limit. As the star collapses it is balances by radiation pressure from fusion. However, the fusion rate scales strongly with density (which is why the most massive stars have extremely short lifetime) so if the star was massive enough, the radiation pressure would probably blow it apart. In fact, this could lead to a pair-instability supernova and there wouldn't even be a black hole remnant even though the star is so massive.

Personal speculation from a non-professional: The maximum NOW may not be the same as the maximum for primordial stars because 2nd+ generation stars contain elements that require higher temperatures for fusion. Thus it may be possible for bigger stars to form now than in the beginning, although the chances of observing them would be low because they would be extremely short-lived... a sufficiently massive star composed of a high proportion of heavy elements may go supernova almost as soon as it's born.

Not the answer you're looking for? Browse other questions tagged star size .

3
How massive can a star be at birth?
43
Why does gas form a star instead of a black hole?
16
What is radiation pressure and how does it prevent a star from forming?
3
Why does gravity increase in star formation?
2
Why are black holes that massive?
1
What if hypothetically Ton 618 could have been a star
2
How do we know what the biggest star is?

16
What is radiation pressure and how does it prevent a star from forming?
9
Entropy of black hole
11
Is there a limit to how hot a star can be?
1
Is there some upper limit in the moon size distribution?
8
Can we compress any object to create black Holes?
6
How small a star can provide Sun-level illumination to its planets?
15
What was the absolute limit to the possible sizes of the first stars formed from "primordial material with no metals"?
1
Could Hawking radiation turn a black hole back into a star?