How can we see stars if they are hundred years of light far from the Earth?

So the right question is, is the light years counted from that second when you look up to the sky? If that so, how can we see the stars from the telescope (which I think it starts when you put your eyes on it, same as when you look up to the sky), that they say it's 5000 of light years from earth? If you say these lights are already started 5000 years of light ago, then there should be so many changes happened to these galaxies or stars in that timeline. Thus, for example, there should be no way to know, if an earth-like extrasolar planet is still earth-like.

You are right, there is no way to know, what is the current state of these objects "now" - if you think on the Newtonian mechanics.

In the Special Relativity, "now" is relative. You can't say, that the 1054 Supernova happened in fact 7000 year ago: if you would see the whole story (1. the star explodes 2. the astronomers of a planet far, far away, some millenia later, detect it) from a spaceship going, for example, with half the light speed, you would get totally different numbers. There is no "objective now" in the special relativity.

For us, "now" is what we see in the telescopes. For us, the crab nebula explosion happened in 1054. We have no way to visit a star, for example, 50 light year away, now - we would need at least 50 years to visit it. (It is the theoreitcal limit - in practice, there is no technology to send anything even to the nearest star, 4.3 light years away. If there would be, it would likely require at least centuries to get there.)

However, the overwhelming majority of the stellar evolution processes is much longer. Most stars exists between 10million and 10billion years long. Of course we have no way to watch a star billions years long with the telescopes. However, we can see billions of stars, typically some decade (centuries) long, and even this is enough to understand a lot from them.

We have a strong reason to not expect a huge difference from the "current" state of most stars/extraplanets from what we can see today on them - simply because such events (change of planetary orbits, average lifetime of most stars) last million times longer.

You are basically correct. Light takes time to travel. Due to the time light takes to travel we see things as they were in the past. In day to day life light travels so fast we rarely have to think about this travel time as we do with sound.

Light is very, very, very fast, but at astronomical scales it's pretty slow. The closest star is 4 light-years away. When we look at a star 5000 light years away, we see it as it was 5000 years ago, because that's how long it took for the light to reach us.

In addition to time delay, the light has to pass through things to get to us. This can distort the light in various ways. It can be diffused by gas clouds, be bent by gravity, distorted by our own atmosphere. If the object is moving away from us the light's wavelength (it's color) will be shifted towards the red or if it's moving towards us blue, just like the sound of a passing car.

Astronomers are aware of all this and have various ways to account for it. Atmospheric distortion is handled with fancy adaptive optics. Gravitational lensing is useful to allow astronomers to see further or behind large objects. And because stars shine in very specific colors, redshift is how we determine the relative velocity of an object.

This applies to everything. We view our Sun through the distortions of our astmosphere painting it spectacular colors and making it shimmer. Our Sun is 8 light-minutes away. If it went out right now we wouldn't know for 8 minutes. But we're pretty sure it hasn't. Similarly, on average, things happen very, very slowly at astronomical scales... until they don't.

A prime example is the famous Pillars of Creation in the Eagle Nebula about 7000 light years from Earth. 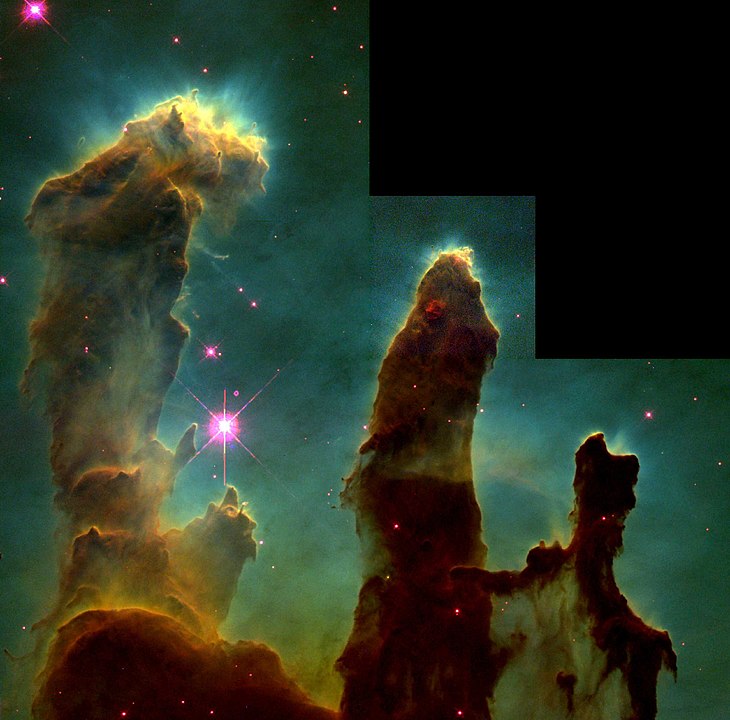 We're seeing it as it was 7000 years ago. And it might not be there anymore. We've detected what looks like a nearby supernova which over about 1000 years would blow away the gases of the nebula and destroy the Pillars. We won't know for sure, but we will be able to watch it unfold as it happened 7000 years ago.

Even you rely on light and sound reaching your body to perceive the world around you. We all live ever so slightly in a distorted past.

Light travels at 186,000 miles per second, and in the case of the furthest galaxies we can see it has been traveling for about 13 billion years. On an astronomical scale, 5000 light years is quite nearby and probably about the distance that the nearest advanced extra-terrestrial civilisation is from us. These distances are far too large to be measured in light seconds, only bodies like the moon, 1.25 light seconds away, are close enough for that. You're right in thinking that significant changes must have taken place since the light started on its journey from stars and galaxies billions of light years away, but they are changes we can never know anything about. In the highly unlikely event that we picked up messages from a civilisation 5,000 light years away, that would make for a very tedious conversation. Our reply would take 5,000 years to reach them, and if they answered immediately we might get their reply in 10,000 years, by which time our descendants might have disappeared in a nuclear holocaust resulting from an all-out nuclear war! There is a decimal point in the moon distance quoted which doesn't show up very well.

Not the answer you're looking for? Browse other questions tagged space-time time or ask your own question.

5
Questions about time and space (from beginner)
5
How would Special relativity explain past-present-future if thinking about 13-billion-light-years distanced objects
4
How Soon Could a Waxing Crescent Moon Be Seen?
1
Could space time curve from the vantage point of earth and out into the universe, and would d = 1 / P in that case give false estimates?
3
Knowing time any where and any when
3
How is distance in light-years converted to years back in time?