Does this smartphone photo show Mars just below the Sun?

I live in Essex, England (51.7678° N, 0.0878° E). On 25 July 2019 (hottest day ever in the UK, btw), 06:43 BST, I took this smartphone photo of the Sun. Is that white dot just below and left of the Sun the planet Mars? I've checked with my SkySafari app and it looks like it could be Mars, but I'm just surprised that my relatively cheap phone could take a picture of the planet. Although the photo is quite dark, it was a bright day. Thank you. 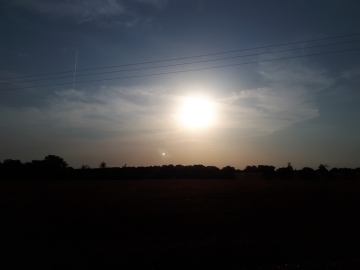 That is a camera artefact caused by the bright sunlight reflecting within the lens on your phone. It’s more pronounced than on a large camera because of the small lens size. This is a secondary image of the sun, as the brightness of the source allows for the reflection to be still intense enough to be detected.

Here is a photo I took with the same artefact. It appears for me as a cyan dot with a magenta outside, but other photos I’ve taken have one with the same colour as the sun. 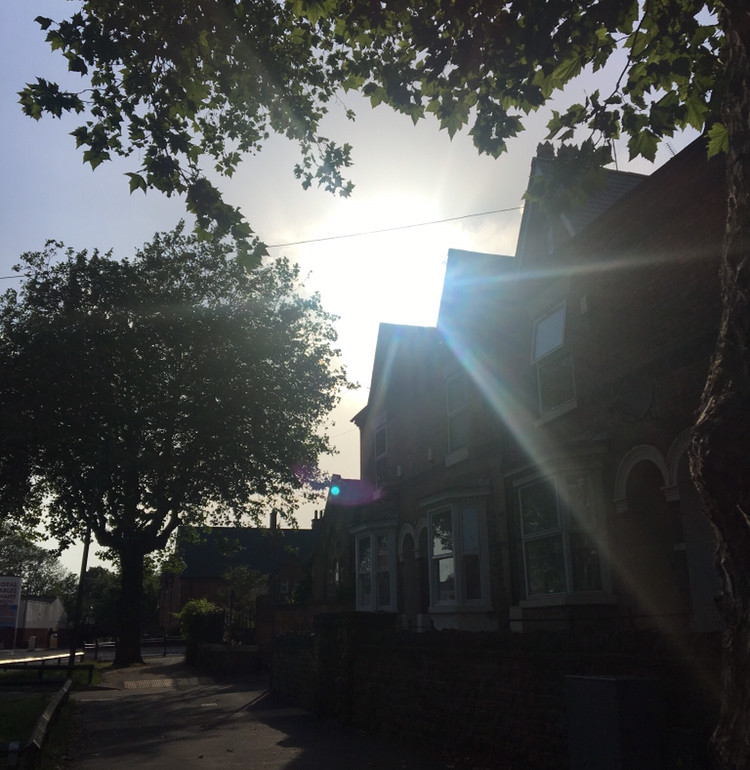 Notice if you zoom in on yours, there’s a halo around the artefact as well.

Also notice that the artefact is directly below the sun in my image, whereas in yours it’s slightly to the left. However, this is because in your image the sun is slightly to the right, and hitting the lens at an angle.

As uhoh says, you can see that the sun is the same distance from the centre of the image as the lens flare (or very close to): 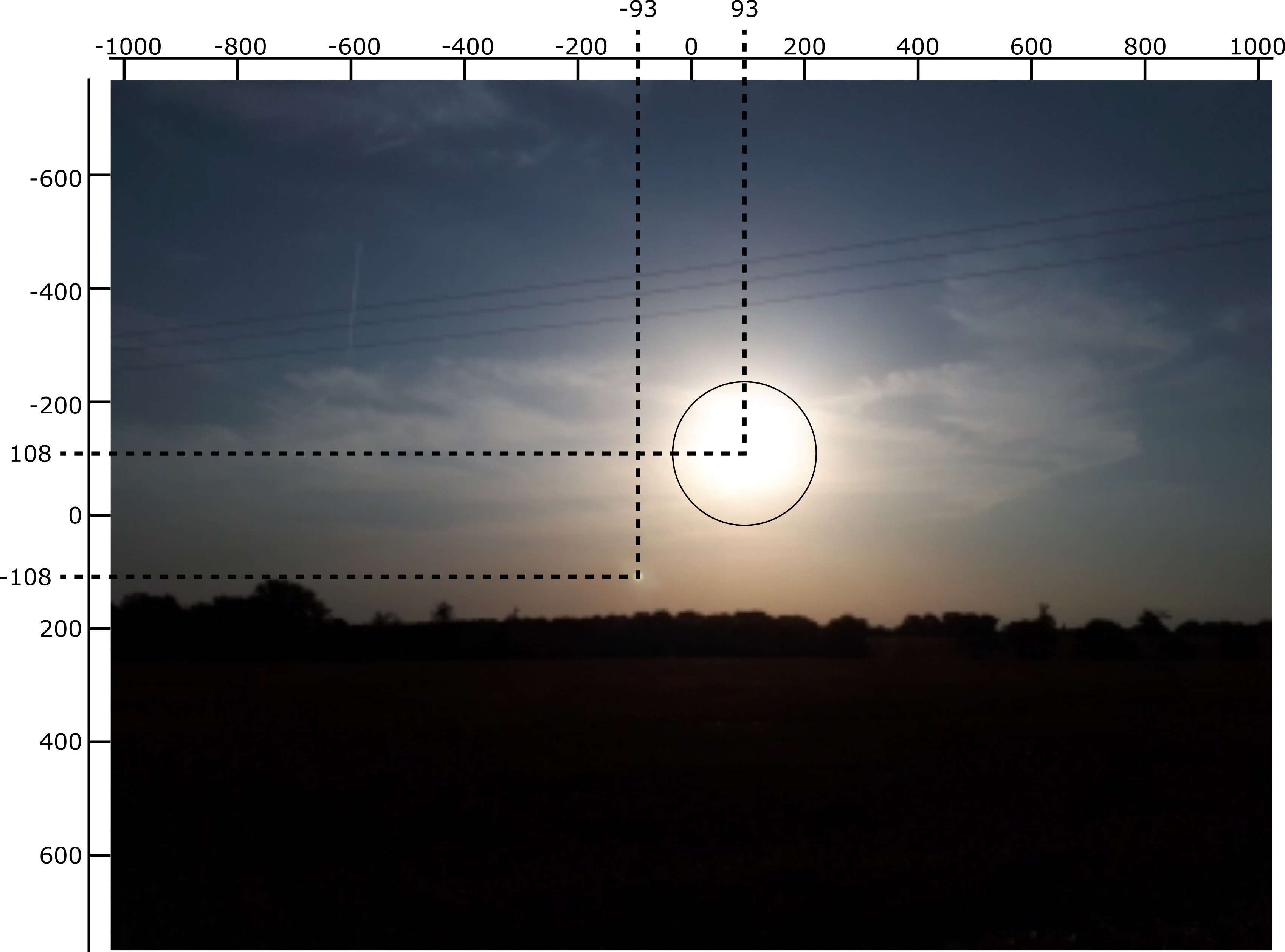 It should be possible to take a photo with the artefact wherever you want, by re-angling the phone - including inside the sun, where it will be drowned out.

I actually took my phone into an Apple Store to find out what this was, where they explained the lens flair effect. Unfortunately I don’t have a source for this, as it was in person. Hopefully the above is convincing enough.

Stellarium shows Mars close to the Sun and just above the horizon at that date and time. Unfortunately, Mars is only 2° above the horizon (and also on the other side of the Sun to the Earth), so it is very unlikely to be visible against the Sun's glare and through atmospheric haze (atmospheric effects are disabled in the Stellarium image below). Still, it's a nice photograph, but the light on the horizon is probably something much closer to home. 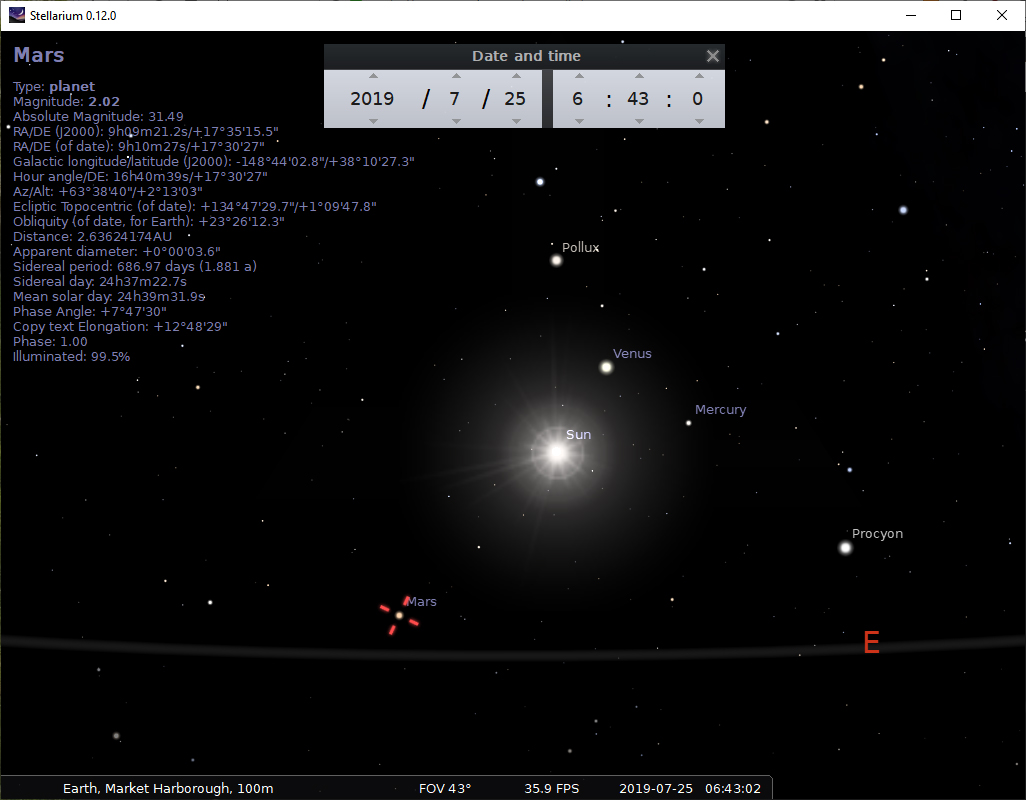 Note that local time is shown, not UTC.

A quick check shows that the spot is diametrically opposite the Sun, which although not at all conclusive, adds credence to it likely being lens flare. 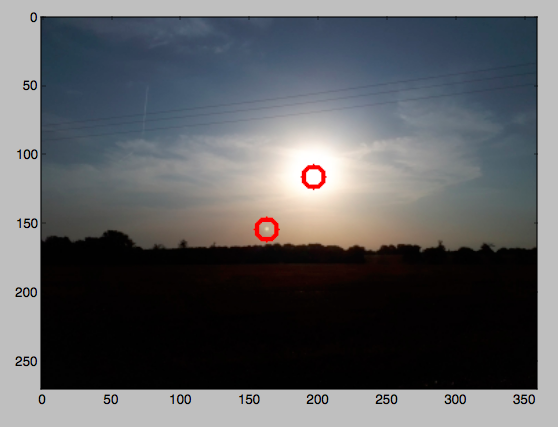 Given your location, the bright light could be the sun's reflection off an aircraft coming into/leaving London Stansted airport.

The only planet I have seen in broad daylight, and on a much brighter day than this with the sun much higher in he sky, is Venus. It was quite clearly visible, one didn't need unusually good vision to see it. I tried to pretend it was a flying saucer, but I don't think I fooled anyone. I don't know where Venus was on the day this photo was taken, but if the smaller bright spot we can see is a planet, it can only be Venus. Venus shows phases like the moon, and at closest approach comes within 26 million miles of Earth, closer than any other planet. It also has a high albedo because of its clouds.

As an addition to the excellent answer by Tim, one can exploit this reflection to do some interesting solar imagery. Here's a picture I took with my phone during the (where I was, partial) eclipse back in August of 2017 (cropped to be more visible). The sun (as expected) is quite bright, and washes out everything - no amount of lowering ISO / increasing shutter would help on a mobile phone's sensor, but the internal reflection attenuated the light enough so that the shape is visible. 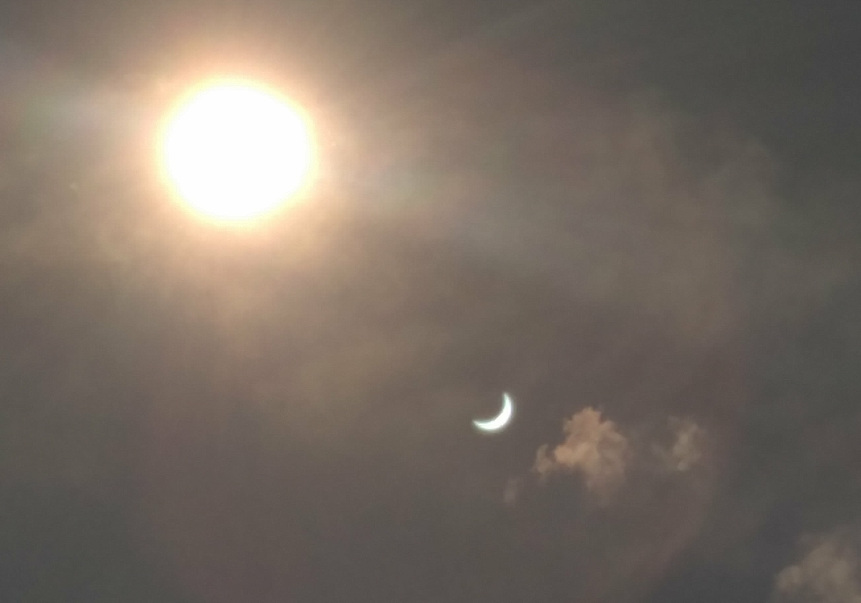 Not the answer you're looking for? Browse other questions tagged planet photography or ask your own question.

4
Apparently two objects in Solar Eclipse image
5
A smudge near Jupiter
4
Is this object Mars?
2
Telescope showing high chromatic aberration
1
What is this planet or satellite in this picture?

16
What is the object in this photo?
3
What causes the bright white area in this photo of the earth?
3
Why does the Moon's terminator look “wrong” in this image?
8
How (the heck) was this photo of Venus at inferior conjunction (between us and the Sun) taken?
3
Is the dot on the photo - Mars?
15
Which part of the milky way does the image show?
8
What does this “web on the surface of the Sun” image reflect? What does 789 nm show us?
10
Which planet is this (if any)?