Astronomer Clyde Tombaugh is shown in a now-famous photograph at the age of 24 with his "homemade" 9-inch Newtonian telescope in this image also shown in Elva R. O'Hara's Clyde W. Tombaugh: Farm Boy Reached for the Stars.

Shown in the photo, the telescope tube is marked with something like

along the length of the tube, and illegibly with

and some other markings in a different, light-toned printing around the circumference of the tube.

According to the linked article:

Tombaugh was born on Feb. 4, 1906, in Streator, Ill. He might have been a typical farm boy but for his one fascination: astronomy. Through the influence of his father and an uncle, the 12-year-old Tombaugh began observing the night sky. He spent hundreds of hours using a 9-inch telescope bought at Sears and Roebuck, learning to methodically identify stars and constellations as well as to observe the movements of the planets.

But on page 243 of Gary Leonard Cameron Iowa State University 2010 thesis Public skies: telescopes and the popularization of astronomy in the twentieth century it says:

Sears Roebuck had only a few cheap hand-held telescopes for sale in its catalogues from the 1920s to the 1940s. However, by 1961, Sears had a total of nine models of astronomical telescope for sale, all Japanese imports under the Tower label.

Question: So exactly what is the origin of Clyde Tombaugh's 8-inch Newtonian telescope? 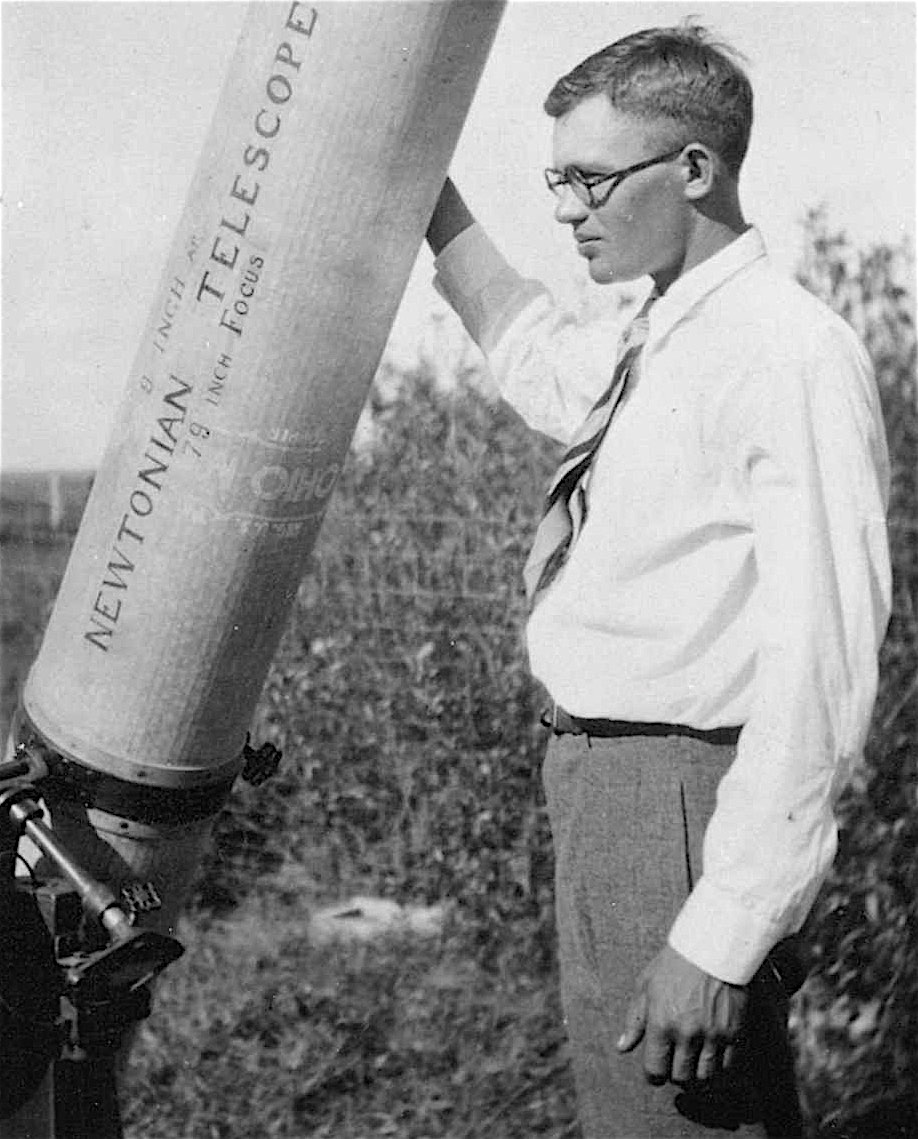 The description there says:

The astronomer Clyde Tombaugh, discoverer of Pluto here shown with his homemade 9-inch telescope. Date: circa 1930

In the first chapter of Out of the Darkness: The Planet Pluto, Tombaugh gives a colorful, personal account of his youth in Illinois and Kansas, including five telescopes:

The last two benefited from optical testing in a storm cellar built extra long for that purpose. Tombaugh's planetary sketches using the 9-inch reflector got him the job at Lowell Observatory.

The same photo appears on page 23 with this caption:

Clyde W. Tombaugh, at the age of twenty-two, with his homemade 9-inch (22.9-centimeter) reflecting telescope on the family farm near Burdett, Kansas. This picture was taken in the summer of 1928, eighteen months before the discovery of Pluto.

Not the answer you're looking for? Browse other questions tagged telescope amateur-observing history telescope-making or ask your own question.

5
What's the origin and culture of funny astronomical terminology?
1
Telescope size to detect Ceres (Newtonian)
6
Astronomical telescope making
6
What are the advantages and disadvantages of a 2-inch eyepiece versus a 1.25-inch eyepiece?
6
What's the difference between a Newtonian telescope and a regular telescope
3
Custom telescope
1
Did Edmund Scientific 4¼ inch Newtonians have 90° prisms as secondary mirrors in the 1970's?
3
How can I improve the Field of View of my home-made telescope?
2
Telescope showing high chromatic aberration