“Table of Astronomy's” depiction of the solar system models

This is going to be a follow up question to my question about the "Table of Astronomy" from yesterday, What is this “Table of astronomy” about?.

I wanted to take a close look at the three depiction of the solar system models (left to right):

Fig. 43. Ptolemaic System; Fig. 45: Tychonic System; and Fig. 44: Copernican System; They are is this order in the original resource

I cant figure out what some of the symbols and circles are supposed to mean. I have marked everything im unsure about partially or completly in red.

(From left to right again) 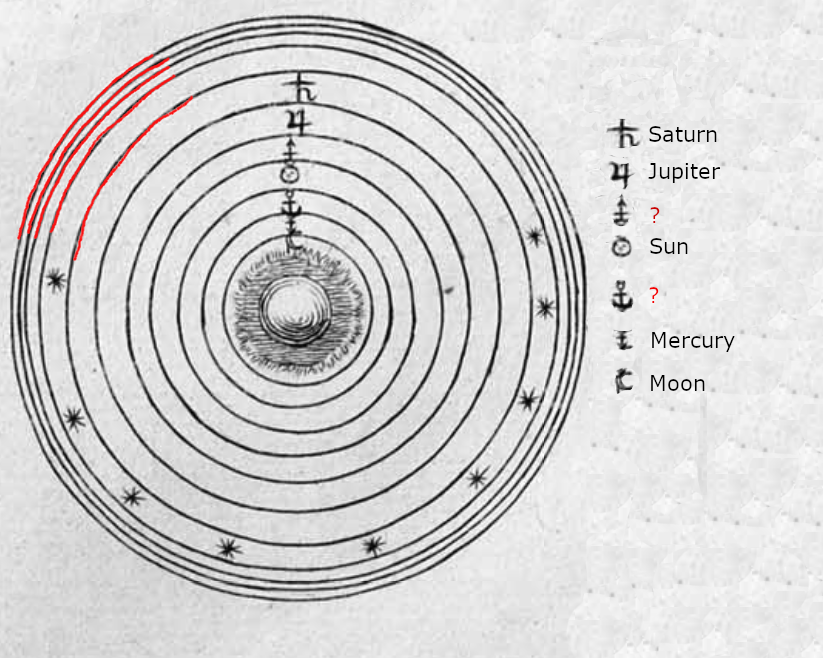 The ptolemaic system is a geocentric system, meaning it has the Earth as its center. I have identified most of the symbols that mark the orbits, although I'm missing two. Furthermore, the 5 outer most orbits(?) are what I'm unsure about. As far as I understand it, Claudius Ptolemy believed not only that the Earth was the center of the universe (making this a model of the universe and not the solar system) but also, that the stars were laying on the inside of the universesphere. Therefore I can imagine that the innermost ring is just to close of the sphere. But there are still 4 rings left.

In addition to the rings, I cant identify the third (anchorlike) and the fifth symbol. 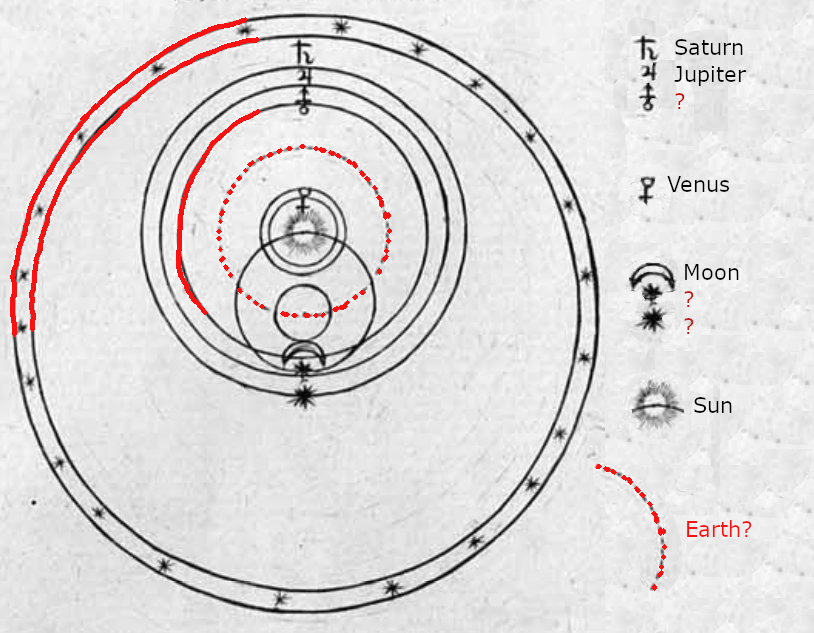 Here again I'm unsure about the two outer rings, and the third, not dotted, orbit around the Sun. The two innermost orbits are Venus and ?

If the (red)dotted orbit is supposed to be the Earth's orbit around the Sun, then why does the earth have two orbits?

Also, what are the two stars under the Moon? 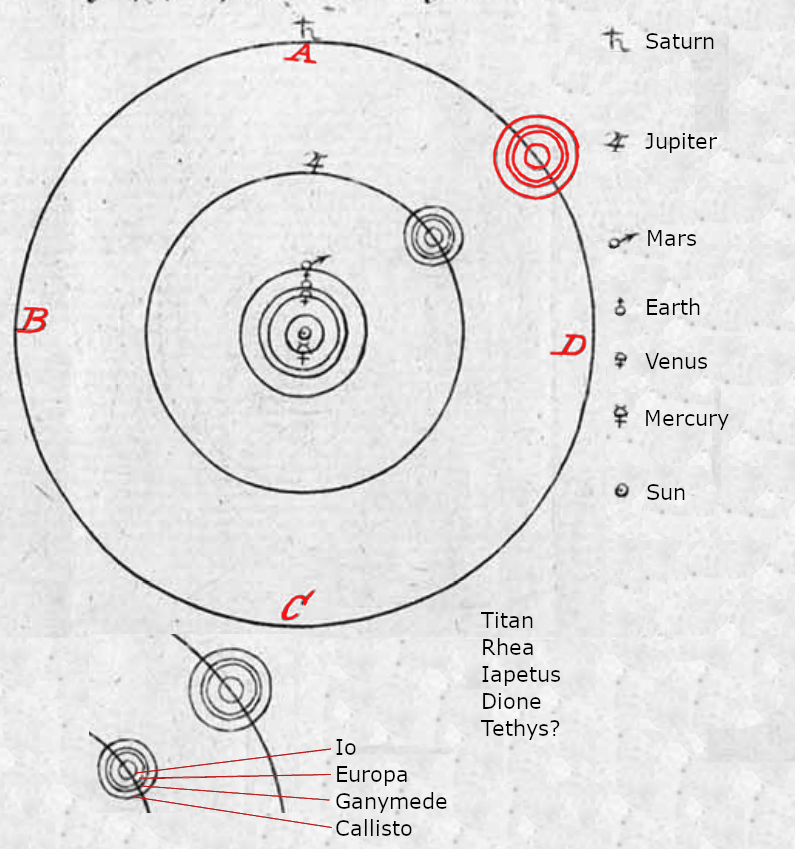 This one is rather straight forward. I'd like to know which of Saturn's moon's orbits this illustration depicts and if my guesses on Jupiters moons are correct.

I hope you can help me! Thanks

In Ptolemy's system, the two missing symbols are Venus (♀) and Mars (♂), respectively. The arc in the bottom of the Venus symbol actually belongs to Mercury below (☿).

The two following spheres contain the stars, which were believed to be eternally fixed. The two next are, I believe, also containing stars, namely the zodiac constellations. The two last ones are the final boundary before the outside, which is the realm of God. The spheres are more discernible is this version (Petrus Apianus 1539): 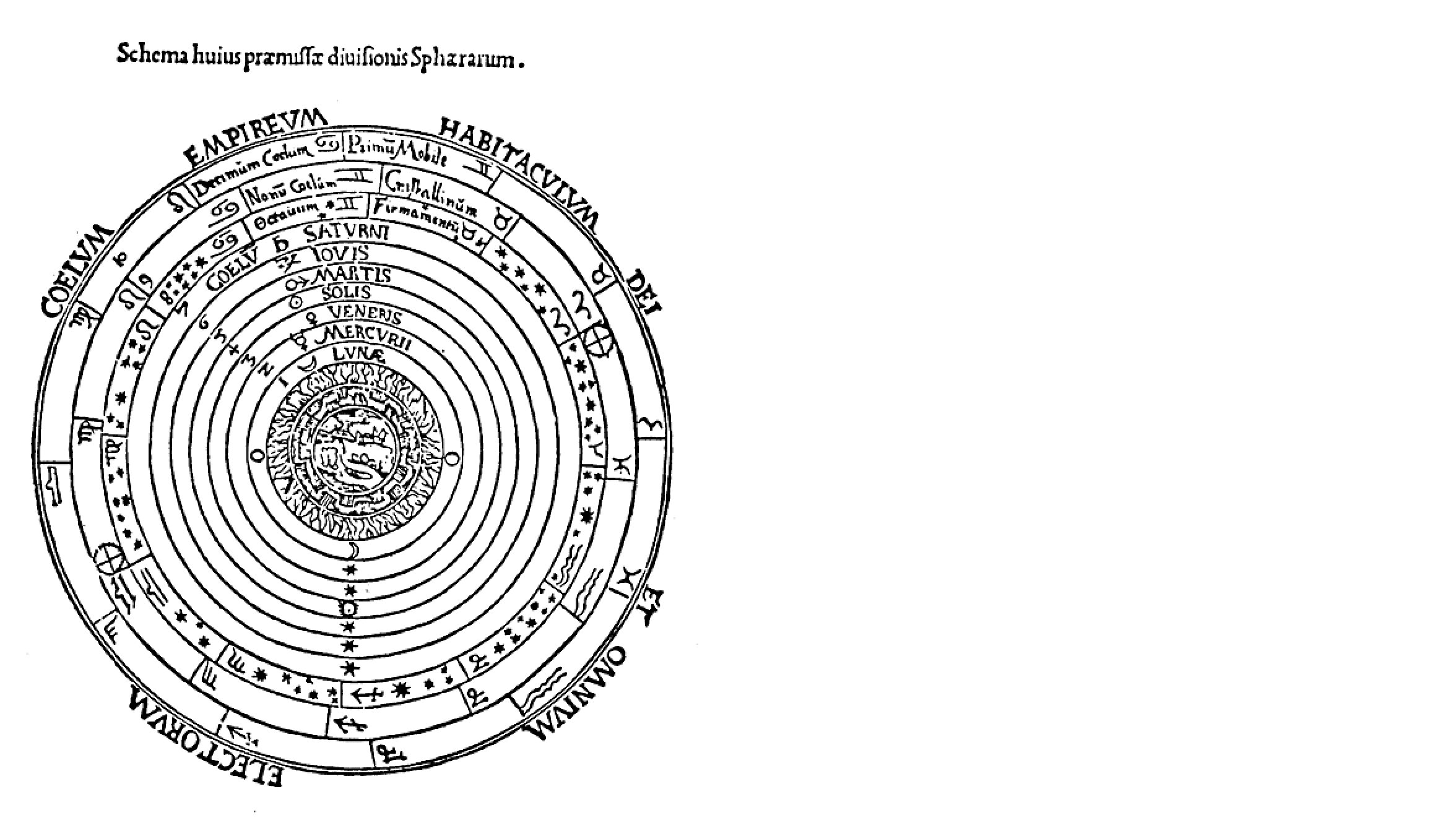 In the Tychonic system, the two outermost rings again contain the fixed stars. The planets do not move between the spheres, but are fixed on the spheres, so the next sphere you ask about ("the third, not dotted, orbit") belongs to Mars (♂). The innermost one is Mercury, although its symbol (☿) isn't drawn in this version.

The dotted orbit isn't Earth. In the Tychonic system, Earth is in the center, and the Sun and the Moon orbit Earth, but other planets orbit the Sun. This orbit isn't drawn in many other versions; I think it's the orbit that Earth takes around the Sun, if you considered the Sun in the center (which Tycho didn't). Although it's not exactly the same size as the Sun's sphere.

The two stars underneath the Moon don't have anything to do with the Moon, I think, but belong to the spheres of Saturn and Jupiter. The reason I think this is that you see the same in some other versions, like this one from Tycho's De mvndi ætherei recentioribvs phænomenis (here taken from Graney (2010): 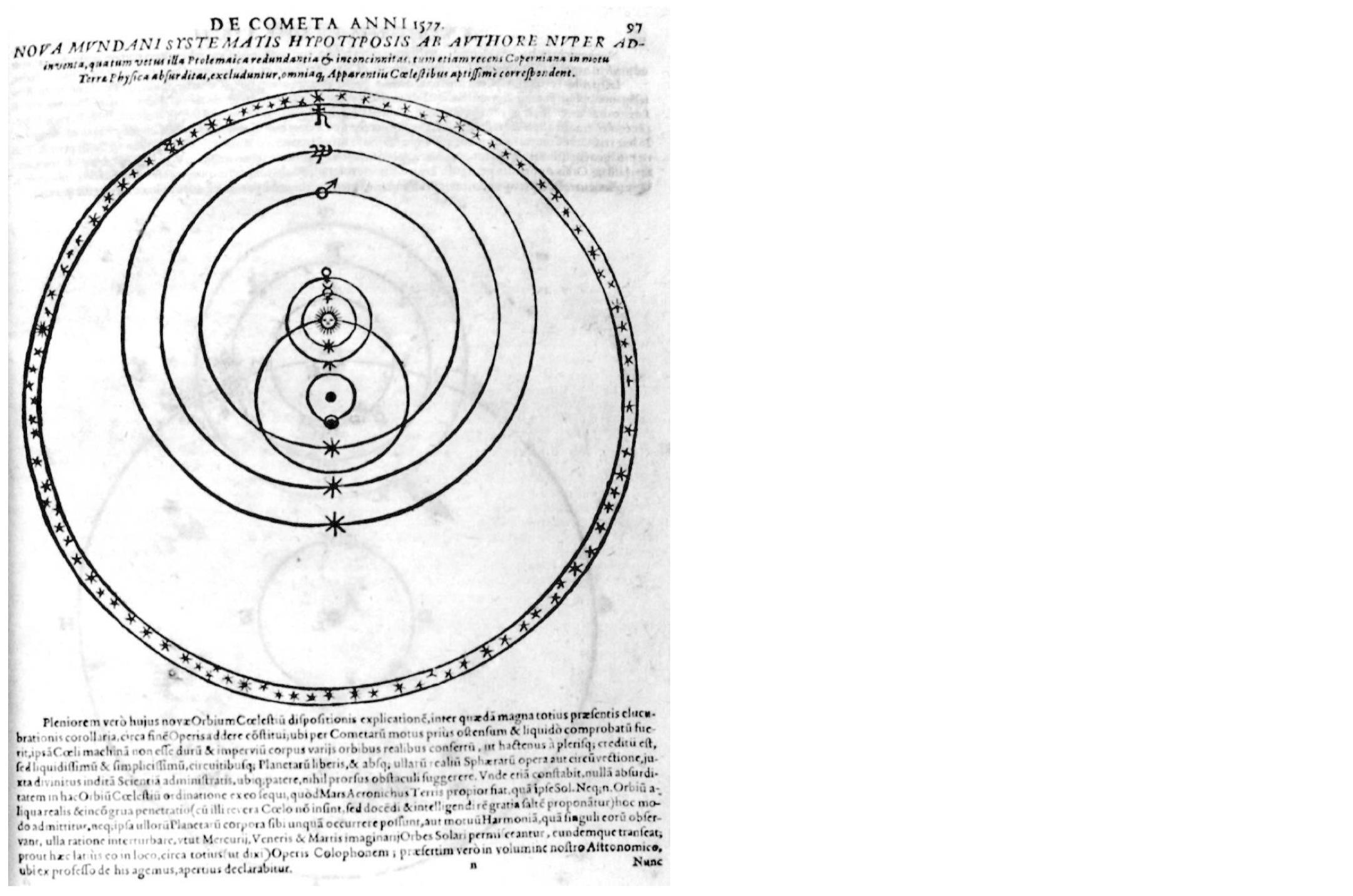 Saturn's moons had not been discovered when Copernicus published his model in 1543. The drawing in your source is from 1728, at which time five moons had been discovered (Titan in 1655 by Christiaan Huygens; Tethys, Dione, Rhea and Iapetus between 1671 and 1684 by Giovanni Domenico Cassini). So since there are four rings, my guess is that they don't represent moons, but rather the rings, with the two midmost circles representing the Cassini Division, discovered in 1675.

Your listing of the moons of Jupiter is probably correct, since that's how they're ordered according to their distance from Jupiter.

I don't know about the letters A, B, C, and D, but my guess is that they mark the direction in which the planets revolve around the Sun, which is correct if viewed from above the ecliptic plane, i.e. the plane with respect to which Earth has an axial tilt of some 23º.

A bit more on the Ptolemaic system.

The five outer circles, from the inside out:

From here on out, the number and function of the remaining spheres varied a bit, but here's one version:

Not the answer you're looking for? Browse other questions tagged history identify-this-object resource or ask your own question.

10
What is this “Table of astronomy” about?

4
Numbers 80 to 85 in Ancient Astronomy
7
Was there ever a hypothesis about a planet called Biga?
1
What is Copernicus referring to when he states that “circles have poles different [from the earth's]”
3
Stellar Classification Table and Star RNG
3
What is it that I have been seeing in the sky?
2
How did Johannes Hevelius' long telescope work? Why all the round holes?
4
MeerKAT's Epic Image of the Galactic Centre, what are we seeing?
10
What is this “Table of astronomy” about?
2
Where do the symbols $\lambda$ and $\beta$ come from for celestial latitude and longitude?
34
How was the mass of Venus determined?