How does the illumination of the sky from the sun compare to that of the moon?

I have trouble describing the questions but this is the best I can do. The sun lights up the sky, until it's about 18 degrees below the horizon. The moon also lights up the sky, and i'm wondering, how does the illumination of a full moon compare to that of the sun? How many degrees does the sun have to be below the horizon to equal the illumination of a full moon?

I hope i'm clear enough. Thanks for any answers

The question is not altogether well defined. One needs to specify what wavelength is being considered and at what position in the sky - since a twilight sky has a very significant gradient of sky brightness.

A paper by Patat et al. (2006) gives the brightness of the sky in the UBVRI photometric bands, at zenith, with the Sun at a variety of altitudes (including below the horizon). Figure 5 from this paper is reproduced below, it shows the zenith sky brightness measured at the Paranal observatory in the V band (approximately 550 nm). Curves for the other bands are qualitatively similar but with different numbers on the y-axis. The vertical dashed lines show where the Sun is 12 or 18 degrees below the horizon (known as nautical or astronomical twilight respectively). 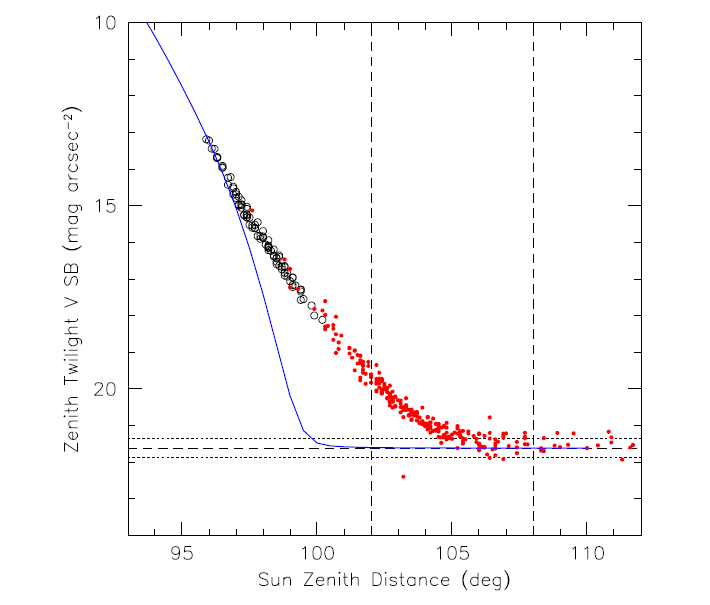 Now to complete an answer to the question we need to know the brightness of the night sky at full Moon. Again, this is not completely defined, since it depends how close you are to the Moon.

The "dark" sky at Paranal is approximately 21.6 mag/arcec$^2$ when the moon is down. That is the horizontal dashed curve in the picture. Another article by Patat (2014) discusses the contribution of the moon as a function of wavelength and angular distance from the Moon. A reasonable number for the full moon at 90 degrees (i.e. the full Moon close to the horizon) is that the sky brightness is increased by about 1.5 mag in the V band (but by as much as 3 mag in the B band). Obviously, if you get closer to the full Moon then the sky becomes even brighter than this.

Using this number and the plot above, we can estimate a night sky brightness of 20.1 mag/arcsec$^2$ (equivalent to a full Moon at 90 degrees) is reached in the V band when the Sun is about 12.5 degrees below the horizon (i.e. very close to nautical twilight).

Caveats (at least): The answer will also depend on how far away the Moon is from the Earth, the altitude of your observing site, whether there is any cloud in the sky, what the density of scattering particles are in the atmosphere and the altitude of the full Moon.

As you probably know, the moon only shines by reflected sunlight and has a very low albedo. Its light is therefore only a tiny fraction of the light of the sun Even the light of the full moon varies, because the moon's slightly elliptical orbit brings it closer to the Earth at perigee than at apogee. Sunlight would light up the sky to about the same extent as a full moon when the sun is about 15 degrees below the horizon.

Not the answer you're looking for? Browse other questions tagged light-pollution or ask your own question.

21
I live in an area with a lot of light pollution, how can I view the stars without building an observatory?
7
Does the Perseid peak cause enough light pollution to be a problem?
2
How high does light pollution reach into the sky?
9
In what parts of the world is it impossible to view the night sky due to light pollution?
4
What does the milky way look like from earth to the human eye without light pollution?
2
Does New Moon Affect Stargazing After MoonSet?
1
What is the maximum Clear Sky Light Pollution rating to see the 2018 Perseid Meteor Shower?