How could a hobbyist astronomer determine apparent magnitude of a star?

Apparent magnitude is a rather complex way to determine the brightness of a star. Quoting the introduction text from the linked to Wikipedia page:

The apparent magnitude (m) of a celestial body is a measure of its brightness as seen by an observer on Earth, adjusted to the value it would have in the absence of the atmosphere. The brighter the object appears, the lower the value of its magnitude. Generally the visible spectrum (vmag) is used as a basis for the apparent magnitude, but other regions of the spectrum, such as the near-infrared J-band, are also used. In the visible spectrum Sirius is the brightest star in the night sky, whereas in the near-infrared J-band, Betelgeuse is the brightest.

While it is of course a useful measure also for the slightly more casual, non-scientific observer to help determine the observed star from its neighboring cluster, or identification in general, I always wondered if there is a way to measure apparent magnitude with enthusiast-class equipment, and what would these procedures be? 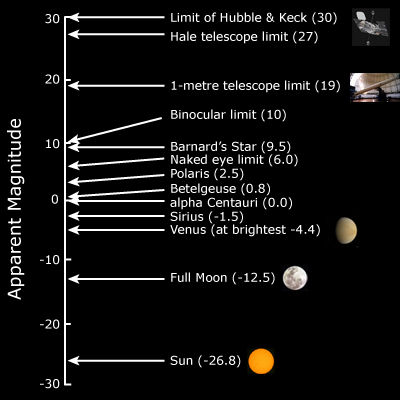 Also interesting would be a description of what level of precision and enthusiast can get with such equipment while measuring apparent magnitude of a distant star. If you need specifics to answer the question, such as precise available equipment or subject of observations, please feel free to choose at will any that would broadly match the capabilities of enthusiast-grade equipment.

The Pogson relation is given by:

With a CCD detector the brightness is easy to determine since it's just the flux of a pixel. You don't have to convert it in physical units (as Watt per square meter) since you have a ratio $\left({\frac{E_1}{E_2}}\right)$, so the raw intensity is enough to determine the magnitude.

As for any other measurement with a CCD camera, you have of course to determine the bias, dark and flat-field and to reduce your data before estimating any magnitude. The precision will depend on the number of observations performed and, as always, it is better to perform several short exposure images than a single long exposure one.

11
How do you figure out the magnitude of stars?
2
Apparent Magnitude / Apparent Brightness relationship help

1
Asteroid apparent magnitude
1
Problem about finding distance with magnitude given
5
How to calculate luminosity in g-band from absolute AB magnitude and luminosity distance?
3
Graph of apparent magnitude of Mars through time from around 2000 to present?
5
Brightest Stars (by its Apparent Magnitude) List beyond 300
2
Brown Dwarf Sun: How dim can a star be in the visible spectrum and still provide enough heat for a planet to be habitable?