Could a Jovian or Saturnian moon keep its atmosphere if the system was within the habitable zone?

Currently the atmosphere of Titan is 1.5x thicker than Earth's atmosphere, but it's also much much colder. It's been said that an astronomical body can keep it's atmosphere if the escape velocity is more than six times the average speed of the molecules.

Does this mean if a moon like Titan was moved to the habitable zone and heated up to livable temperatures, then it's atmosphere would escape?

What is the minimum gravity necessary for a moon to hold onto an earth-like breathable atmosphere within the Habitable Zone?

To your first question... from this paper, we can see that there are 3 types of atmospheric escape:

So we can see if Titan is moved into the Habitable zone, it will lose a considerable portion, or possibly almost all, of its atmosphere.

Regarding your second question, the major factor to atmospheric loss in that scenario, for a small(relatively speaking) celestial body in the Sun's habitable zone is the solar wind. If we look at the inner planets, we can see that they all have some form of magnetic field. Mercury has a relatively strong one; Venus has an weak, induced one; Earth has a strong magnetic field; Mars has remnants of its dissipated one. The magnetic field provides protection to the planet's atmosphere.

In the habitable zone, we can say that the average temperature of the body would be around 300 K, similar to Earth's. Then, let's define that an Earth-like atmosphere would be comprised of at least nitrogen, oxygen, H2O vapor, and CO2. Using the same chart, we can start by moving Titan to below Earth, and then moving it up to where H2O vapor can be retained. We find that a celestial body with an Earth-like magnetic field can retain an Earth-like atmosphere if its escape velocity is around 6~8 km/s.

1st Q: It's been said that an astronomical body can keep it's atmosphere if the escape velocity is more than six times the average speed of the molecules.

Gravity isn't the only factor that permits an object to retain an atmosphere. The Moon has gravity yet is virtually a vacuum, Mars has a surface pressure less than 1% of Earth and continues to lose its remaining atmosphere.

Titan has the protection of Saturn's magnetic field, and none of its own. If Titan were moved closer to the Sun the solar wind would quickly strip it's atmosphere.

Wikipedia: Atmosphere of the Moon

"The atmosphere of the Moon is a very scant presence of gases surrounding the Moon. For most practical purposes, the Moon is considered to be surrounded by vacuum. The elevated presence of atomic and molecular particles in its vicinity compared to interplanetary medium, referred to as "lunar atmosphere" for scientific objectives, is negligible in comparison with the gaseous envelopes surrounding Earth and most planets of the Solar System. The pressure of this small mass is around 3×10−15 atm (0.3 nPa), varying throughout the day, and in total mass less than 10 metric tonnes.2 Otherwise, the Moon is considered not to have an atmosphere because it cannot absorb measurable quantities of radiation, does not appear layered or self-circulating, and requires constant replenishment due to the high rate at which its gases get lost into space.".

"The atmosphere of Mars is the layer of gas surrounding Mars. It is primarily composed of carbon dioxide (94.9%), molecular nitrogen (2.6%) and argon (1.9%). It also contains trace levels of water vapor, oxygen, carbon monoxide, hydrogen and other noble gases. The atmosphere of Mars is much thinner than Earth's. The surface pressure is only about 610 Pascal (0.088 psi; 6.1 mbar), which is less than 1% of the Earth's value. The currently thin Martian atmosphere prohibits the existence of liquid water at the surface of Mars, but many studies suggest that the Martian atmosphere had been much thicker in the past. The atmosphere of Mars has been losing mass to space throughout history, and the leakage of gases still continues today.".

Atmosphere: "Saturn's moon Titan and Jupiter's moon Io have atmospheres and are subject to atmospheric loss processes. They have no magnetic fields of their own, but orbit planets with powerful magnetic fields, which protects these moons from the solar wind when its orbit is within the bow shock. However Titan spends roughly half of its transit time outside of the bow-shock, subjected to unimpeded solar winds. The kinetic energy gained from pick-up and sputtering associated with the solar winds increases thermal escape throughout the transit of Titan, causing neutral hydrogen to escape.15 The escaped hydrogen maintains an orbit following in the wake of Titan, creating a neutral hydrogen torus around Saturn.".

2nd Q: Does this mean if a moon like Titan was moved to the habitable zone and heated up to livable temperatures, then it's atmosphere would escape? 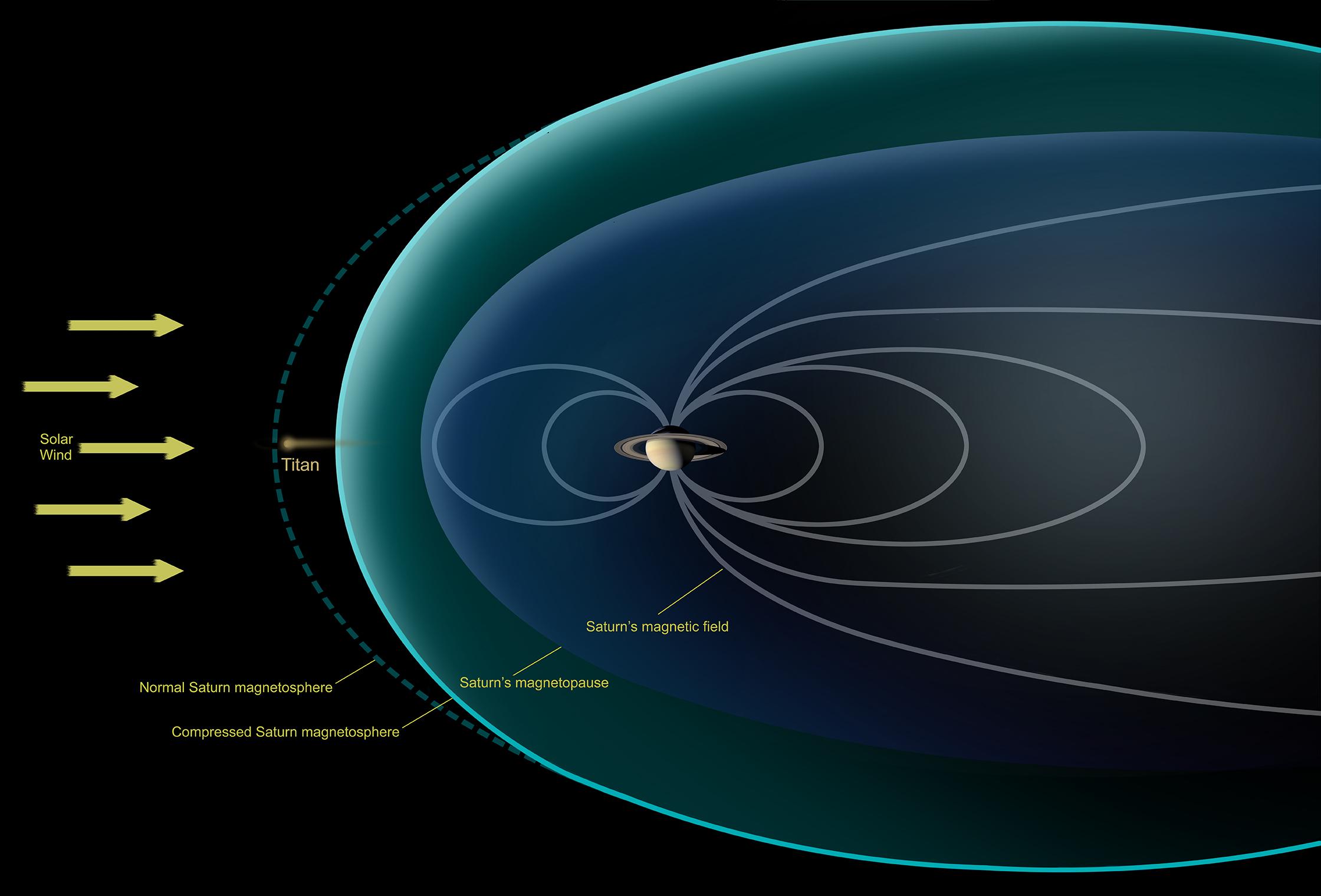 On June 13 2007 (and other dates) Titan ventured outside of the protection of Saturn's magnetic field, it remained temporary magnetized for 3 hours. It happened that Cassini was in a good position to get a few photos (scroll to the bottom). 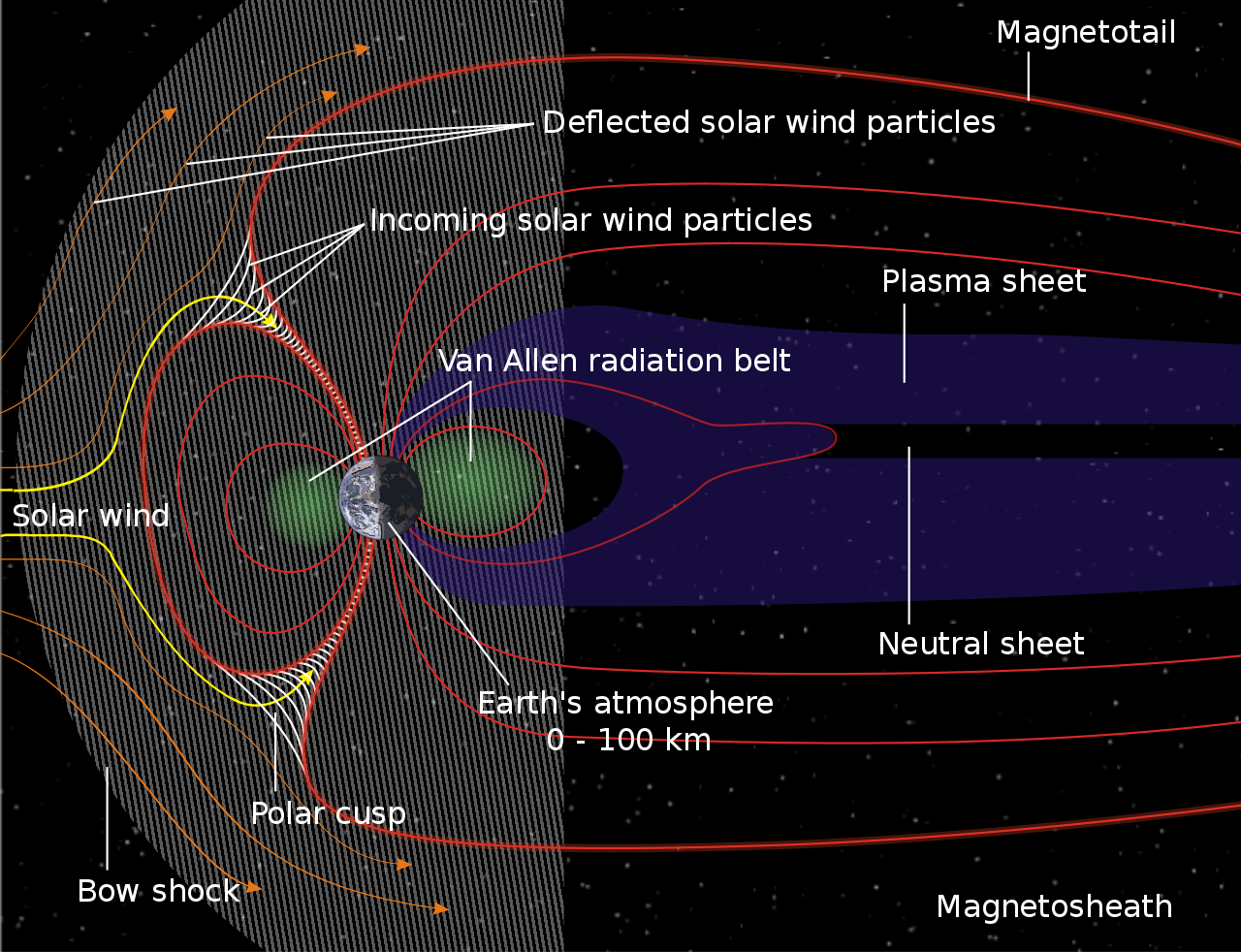 Earth's magnetic field protects it from solar wind, and preserves our atmosphere.

Some interesting (but lesser related to the question) videos of Titan's atmosphere:

A video of Titan's surface is available from NASA: "A World Unveiled: Cassini at Titan" (Aug 11 2017). The video: "Titan Touchdown" shows the landing on the surface (Jan 11 2017). Data from Cassini's radar converted into a colorized movie is shown in the video: "Flying over an Extraterrestrial Land of Lakes" (Dec 12 2013). A narrated video of the landing: "View of Titan From Huygens" is also available.

The habitable zone is not just Earth's orbit. Mars was once habitable apart from lack of oxygen, and so was Venus with the probable exception of its equatorial zone, which would have been too hot. Both planets have held on to their CO2, and so would Titan. There would be some modifications for a while if Titan moved into a Martian orbit. The methane would soon be reduced, the now underground ocean of ice would melt, subterranean deposits of frozen CO2 would evaporate and the resulting greenhouse effect would make Titan warmer than Mars, just as ancient Mars was warmer than the Mars of today. Water vapour would become an important atmospheric constituent and increase the greenhouse effect.

Similar considerations apply to Ganymede and Calisto, except that they would be very short of nitrogen. What use all this speculation is, I'm not sure, seeing that it is never going to happen.

Not the answer you're looking for? Browse other questions tagged planetary-atmosphere natural-satellites saturn habitable-zone or ask your own question.

6
Gravitational pull needed to keep a gas in atmosphere

4
What is the Habitable zone all about?
12
Why argon instead of another noble gas?
1
What of the following moon-situations would be better?
6
Mars vs Venus: the retention of atmospheres in relationship to Earth
2
What if the atmosphere of Titan were like the one on Venus?
5
Why is Saturn invisible in this radar image of its rings?
2
Can there be a three-moon system where only two are visible most of the time?
3
How far from Betelgeuse is its habitable zone?
6
How does Io's atmosphere behave locally near volcanic plumes?