Are there any to-scale diagrams of the TRAPPIST-1 system?

I was recently told that the planets in TRAPPIST-1 are close enough together that you can see them from each other, as visible, discernible planets "hanging in the sky". i.e. much like the moon.

This assertion is compatible with this question: How many things are wrong in this "artist view" of the TRAPPIST-1 system?

I'm trying to understand the implications of the claim, and started by trying to find a to-scale astronomic diagram of some, or all, of the TRAPPIST-1 system, showing the star, the planets, their sizes and orbits, to scale.

Obviously such a diagram of the (Sol-Terra) Solar System would be completely useless - a few pixels in the centre, surrounded by a 8 other single-pixel-dots around the diagram.

But if the claim is true for TRAPPIST-1, then I would expect such a diagram to be actually "usable".

But I couldn't find such a diagram. Does one exist?

As BMF already pointed out, you won't really see any planets in such overview diagrams for TRAPPIST-1, either. At least not with more than a few pixels per planet.

As I did not find a good model online, I would recommend looking at "Games" like Universe Sandbox or SpaceEngine. For the latter, older versions are even free.

It's kind of hard to imagine distances on a solar-system scale. If the Earth was a basketball, for example, the Moon would be slightly smaller than a tennis ball and about 24 feet away. The Sun would be 80 feet across and nearly two miles away.

The entire Trappist system, all seven planets, each of them thought to be larger than Mars, fits between the Sun and Mercury not once, but twice with some room to spare.

The orbits are thought to be nearly circular and very close to the orbital plane, so how close the planet's get to each other is pretty straight forward.

Earth's moon for example, is about 380,000 km from Earth on average. TRAPPIST-1b, the innermost planet and TRAPPIST-1c, when they pass in their respective orbits are about 640,000 km distant, so on the night side of TRAPPIST-1b, TRAPPIST-1c would appear larger than Earth's moon and perhaps brighter as well, as it gets more illumination from its star than our Moon does from our sun, though much of that light would be in the infra-red spectrum, so you'd need the right kind of eyeballs or IR goggles to appreciate how big and bright it is. (Our moon also glows brighter in IR than in reflected sunlight, we just don't notice). To our eyes, hard to say but likely visibly red, larger than the moon, clearly visible, not as bright to our eyes I would guess.

The more distant planets would grow smaller and less bright accordingly. The third planet 1.6 million km, the fourth, 2.65 million, and the furthest out planet about 7.5 million km. That would be about 20 times further than the Moon, but with over twice the diameter of the Moon, it would appear about 1/10th the size, which is still big enough where its size could be observed and estimated. (Roughly three times the angular diameter of Venus as viewed from Earth). See here for a method of calculating. The more distant planets would also glow less bright both because they are visibly smaller and because they're further from their star, receiving less light to reflect back.

So, from the inner most planet it would be a scale from larger than our moon, shrinking consistently till the furthest of the other six planets was about three times larger than Venus appears to us.

The primary differences between their solar system and ours, in addition to the distances and the much redder, less bright star, is the planets are likely all tidally locked, so the sun wouldn't be visible from the far side of the planets. The planets also move in near perfect inclination so they would follow each other very neatly on the ecliptic, eclipsing each other regularly.

The sun would likely be too large in the sky to ever be fully eclipsed by any of the planets relative to any other planets, but the planets would regularly and visibly cross in-front of the sun from the view of other planets. It wouldn't be like a Venus transit which we see, and which is just a tiny dot moving across the sun, it would be much more visible than that, just not a full eclipse (I don't think) from any planet's point of view. The sun being over 10 times the diameter of any of the planets, it would never be fully eclipsed. The sun would appear considerably larger in the sky (but less bright, much more red), than our sun appears to us.

It would be something to see. Planets would also have visible phases viewed from other planets, like our moon does and like Venus does when viewed by telescope.

Using Wikipedia numbers, this is the TRAPPIST-1 dwarf star with companions b and c, distances and radii to scale.

Here is a view of TRAPPIST-1b transiting its dwarf star, seen from low orbit around TRAPPIST-1c, with optical focal length 34 mm, and again distances and radii are to scale. 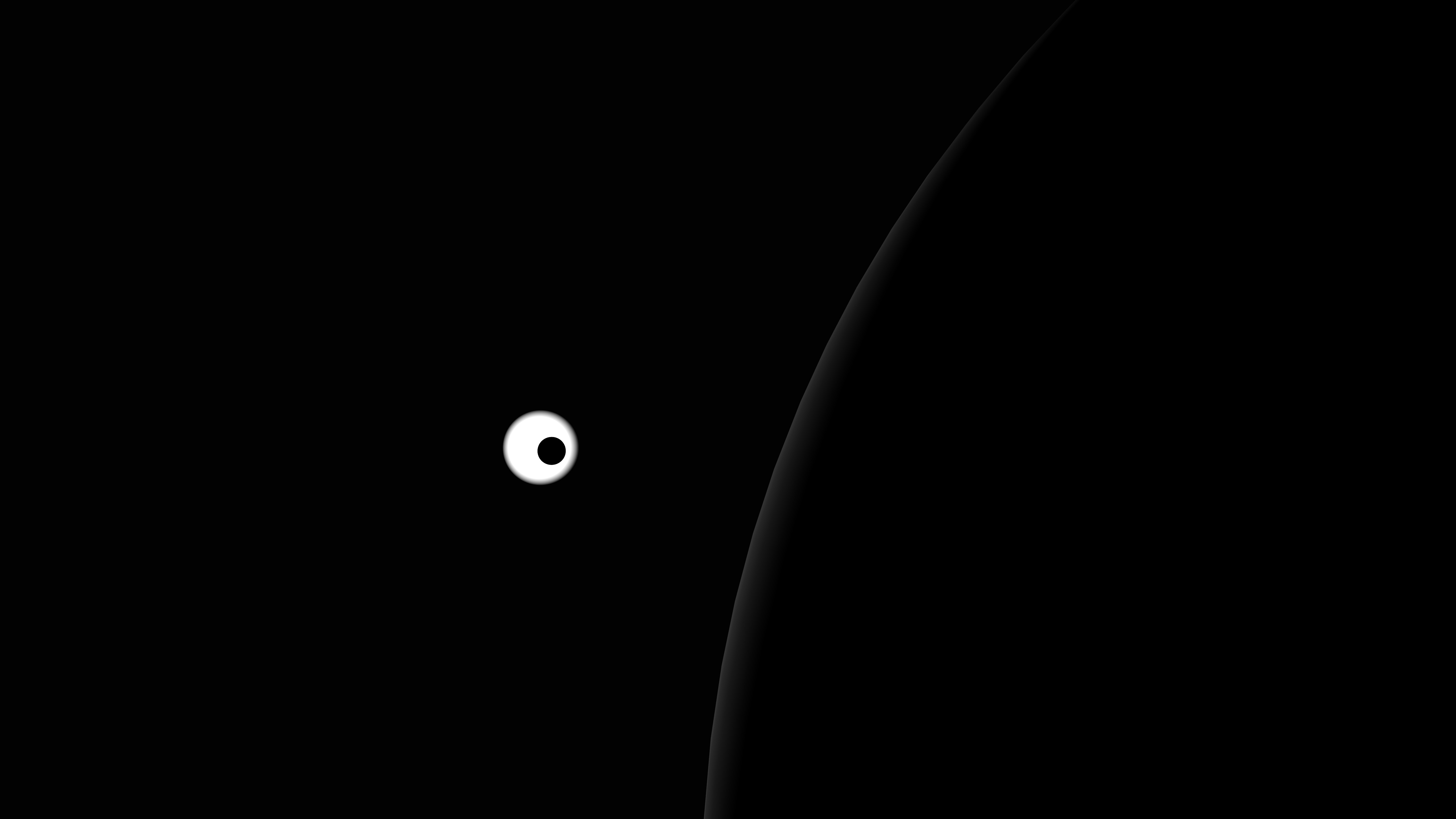 I couldn't find one that respects the scale of the planets and their orbits, probably because the planets are just too small to be respected. I plotted the orbits of Trappist 1b-h, as well as Trappist 1 itself here in this image.

Data for the orbits were taken from Wikipedia's page on the Trappist 1 planets. Surprisingly, each pixel represents about 10,000 kilometers. To see the largest of Trappist 1's planets you'd only need an image twice as large.