Is Earth's climate significantly different when the one solstice occurs at aphelion rather than the other?

I mean different in some kind of significantlly non-symmetrical way, such as it being much colder during one period rather than the other? Let's assume other factors, such as tilt due to nutation and variation in the Sun, are the same.

Seasons on the Earth are driven primarily by axial tilt. I'm writing this answer in late August, when the Earth is a bit past aphelion. That event currently occurs in early July, a couple of weeks after the June solstice. Yet it's summer in the northern hemisphere. Precession have a secondary effect on the seasons. The current situation (perihelion close to the December solstice, aphelion close to the July solstice) was reversed ~12000 years ago when perihelion coincided with the June solstice. This made Northern Hemisphere summers hot but short, winters cold and long.

The brutally hot Northern hemisphere summers back then resulted in the end of the last glaciation (colloquially, ice age). Glaciations start when summertime temperatures at far northern latitudes (65° north is the standard proxy) are so mild that snow from the previous winter doesn't completely melt. Glaciations end when summertime temperatures in the Northern Hemisphere become hot enough to melt the ice that has accumulated over forty thousand to a hundred thousand years.

The reason we aren't we seeing a glaciation start now (conditions are right from the perspective of precession) is that the Earth's eccentricity is rather low. Precession, eccentricity, and other factors have to line up to trigger a glaciation.

I'm not sure how much this will add that hasn't already been said, but maybe a few details.

You're asking about one of the 3 Milankovich Cycles, called precession and it does play a role, usually working with other cycles, but it can drive the beginning or end of a glaciation period, sometimes called an ice age.

The axial tilt which drives the seasons has a much bigger than 6%, in some latitudes well over double the sunlight is received in summer than winter, but 6% is still big enough to have an effect. 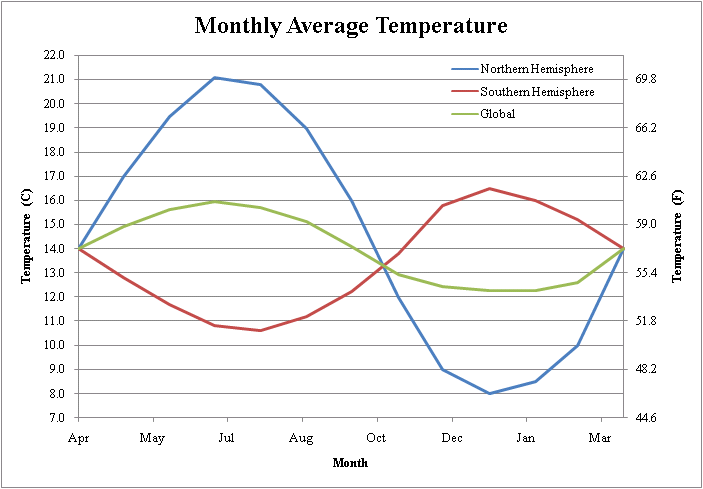 Source of picture, and it's related to the question worth a click

The effect when perihelion is in January in the Northern Hemisphere is milder seasons, colder summers and warmer winters, and it's the colder summers which can drive ice ages or glaciation periods.

The precession cycle (23,000 on average) that you asked about plays a role too even though there's never been a 23,000 year cycle, the 10,000 year windows between some glaciation periods can be tied to precession. The entire engine gets a little complicated with basically 3 sine waves being added together, but it can still be measured when the Northern Hemisphere summers are getting less solar energy and when they are getting more and that does line up pretty well with the rise and fall of glaciers.

Because precession is one of 3 orbital drivers and not the strongest (I think Axial tilt is the strongest of the 3 Milankovich cycles - but not 100% certain), but because there's 3, there's no neat response on Earth to precession changes.

As noted by Michael Walsby, eccentricity amplifies the precession cycle. When Earth's eccentricity peaks at over 6%, the precession effect would be nearly 4 times what it is currently. The Sun likely appears visibly larger at perihelion than aphelion during peak eccentricity, which I think is pretty cool to think about. We have super-moons from time to time now. When the eccentricity is over 6% we'd have supers-suns once a year and on a yearly basis the sun would vary in size like the Moon does now. It kind of does that now, but the change in size is too small for most of us to notice.

At present the Earth's orbit is very nearly circular, with only a 3 percent difference between distance at aphelion compared with perihelion, too small to make a significant difference to the winter solstice. However, the Earth's orbit is perturbed occasionally by the gravitational field of Jupiter, so at intervals of about 100,000 years the distance from the sun at aphelion increases to about 12 percent, which is enough to cause ice ages.

Not the answer you're looking for? Browse other questions tagged precession climate or ask your own question.