Is seeing the apollo moon Landers via earth telescope that hard?

There are interferometers, which are combining multiple telescopes together, with 0.001 arcsecond resolution. With changes, couldn't these observe the Landers? Is the reason why nobody is seeing the Landers related to effort and not actual technical limitation? Besides atmosphere interference, brightness, time use and other general issues.

Is seeing the apollo moon Landers via earth telescope that hard?

Yes, it still is.

The top part of the Lunar Modules is about 4.2 meters wide which is a little more than double the resolution, so if there is some good contrast then it might appear in a reconstructed interferometric image.

However, those optical interferometers are not designed for imaging of extended objects. They only have a few telescopes and so are mostly limited to resolving more than one point-like object from each other, such as a double star or a star and an exoplanet.

With so few telescopes in an optical interferometer, a complex image like lunar terrain would be difficult or impossible to reconstruct without a model. For example, the images of the accretion disk of a black hole by the event horizon telescope required some input modeling to interpret the interferometric data.

Near sunrise or sunset however, the shadow of a lunar lander will be much larger. The lander is about 7 meters tall, so the shadow could be 4 or more meters wide by several tens of meters long. Since the Moon's orientation, as well as that of the lander and the local terrain is extremely well documented, then at each moment you could estimate what the shadow would look like in size, shape, and orientation. With that model, an interferometric image based on a few telescopes could be used to confirm the shadow.

However, using a model like that won't appease conspiracy theorists. 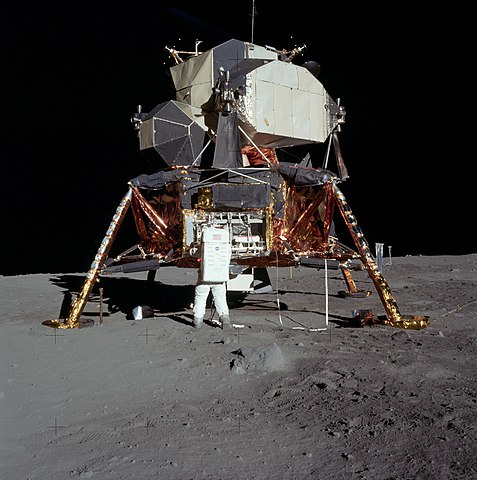 3
Will the lunar gateway be visible for ground based (amateur) telescopes?
0
Can the interferometer called "Gravity" measure "a few centimeters on the Moon"?
-7
Given this report, you can see why people may think the moon landings were fake?
3
How can lunar pits be distinguished from craters?

20
What is the distance that the Moon travels during one orbit around the Earth?
18
Is there any telescope on Earth that can see the lunar rovers on the moon?
3
Are these parallel lines I'm seeing in this image a real pattern on the Moon?
7
Place on Moon that always lit?
2
Calculating the Size of Earth in the Apollo 8 Earthrise Photo
57
Why does Io cast a hard shadow on Jupiter, but the Moon casts a soft shadow on Earth?
27
Where do we have it from that the Moon is migrating away from Earth?
17
Why would the side of the moon that faces earth be as dark as the far side of the moon?