Electrons annihilate with positrons produced through fusion processes in stars. Which particle interaction produces new electrons so that the sun isn't deplete of electrons? Or is something else happening altogether?

Regular fusion cycles in stars produce neutrinos and positrons as by products. Those positrons annihilate with electrons that are already there in the plasma of the star to produce the light that we eventually see. How are those electrons replaced?

The proton-proton chain ultimately converts four protons into one helium nucleus. The charge of the 4 protons was balanced by 4 electrons, but helium contains 2 protons (and 2 neutrons), so it only needs 2 electrons to be balanced.

As you point out, the process of converting a proton to a neutron releases a positron (and an electron neutrino), and that positron quickly annihilates with an electron.

Here's the diagram from that Wikipedia page of the main p-p chain. 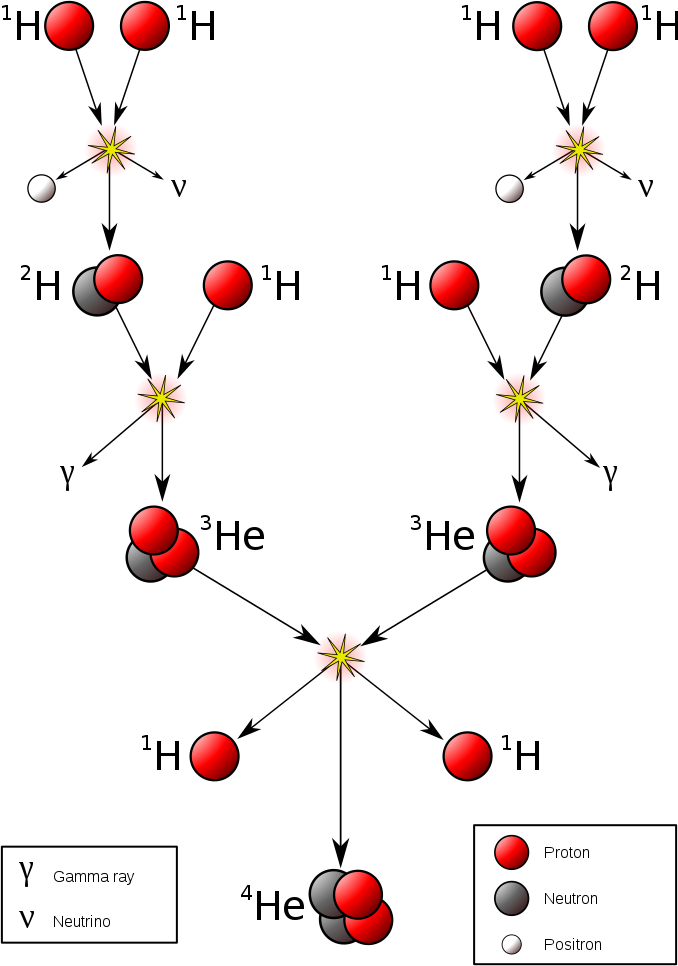 So the process actually consumes 6 protons, and emits 2 protons, a helium nucleus, and 2 positrons (plus a couple of neutrinos), and a couple of gamma photons. The positrons annihilate with 2 electrons, releasing more gamma photons (usually 2 or 3 apiece, depending on the spin alignments of the positron & electron).

If you add everything up, you'll see that the electromagnetic charge balance is unchanged.

We started with 4 protons, which are balanced by 4 electrons nearby in the stellar core plasma. (We can ignore the intermediate pair of hydrogens that are eventually re-emitted). We end up with a helium nucleus that only needs 2 electrons to be electrically balanced, so if those other 2 electrons weren't annihilated then the star would build up an excess of negative charge.

They are not replaced.

Fusion in ordinary stars means actually many processes, neutrinos are involved most commonly in these:

The created positrons (very) quickly find an electron to annihillate into two (sometimes 3) gamma photons: $e^- + e^+ \rightarrow 2 \gamma$. As you can see, both the electric charge and both the lepton number (detailed below) remains. Very rarely also neutrinos (or some more exotic particles) can be created, but even these reactions keep the conservation laws.

Sometimes gamma photons can "decay" to electron-positron pairs (or, very rarely, to another particle-antiparticle pairs), this is called pair production. It can happen only near an electrically charged particle (because the photons are going with $c$, but the resulting particles aren't, so to preserve the impulse we need someone to take away the excess impulse - this requirement hugely decreases the probability of this reaction).

In the nuclear processes of stars, the net result of the reaction creating/destroying electrons looks like $n \rightarrow p + e + \nu_e$, or $p \rightarrow n + \overline{\nu_e} + e^+$, or their reverse. Note, these are only the net results, the actual processes are more complex (involving the quarks and intermediate bosons of the weak interaction ($W^+$, $W^-$, $Z^0$)). We can say as if neutrons would decay to a protons or electrons (or the reverse), or that protons decay to positron and neutron (or the reverse).

Any time if an electron is created, also an electron antineutrino is created with it. The important thing is, that both of them remain the same:

All the reactions in the stars keep these laws.

P.s. stars are fusing mostly hydrogen to heavier elements. Hydrogen has no neutrons, all the heavier elements have (typically, as the proton number of the nuclei grows, also the ratio of the neutrons grows with it). Thus, the long-term tendency is really that the count of the electrons and protons are decreasing in the stars, while the count of the neutrons grows. Nothing replaces them. The ultimate end, which is possible only in larger stars (much bigger than the Sun) is the neutron stars, which has only a very little electrons (and protons), and the star is mostly a big neutron ball. 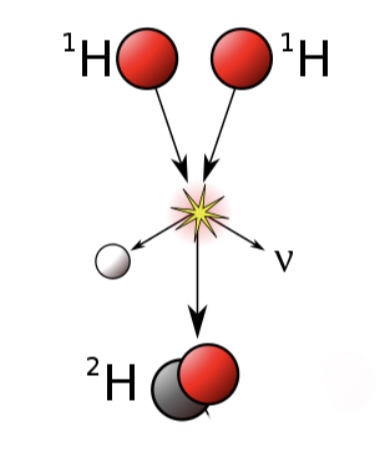 I'm stealing a bit from other answers, just to clarify the point here. What follows is not exactly how it all happens, but should clarify how electrons and positrons are balanced.