Why is this telescope so short? How hard is it to make such a fast primary?

The recently discovered object C/2019 Q4 (Borisov) is in the news because it might have an eccentricity greater than one, which means it might be from outside the solar system, though not necessarily. MPEC 2019-R106 estimates e=3.08.

I looked at Sky and Telescope's Is Another Interstellar Visitor Headed Our Way? which shows the image and caption below.

Although it is impossible to be sure from only this photograph, the 0.65 m telescope looks like the distance from primary to the small secondary is only about 1 meter, maybe 1.2 at most. 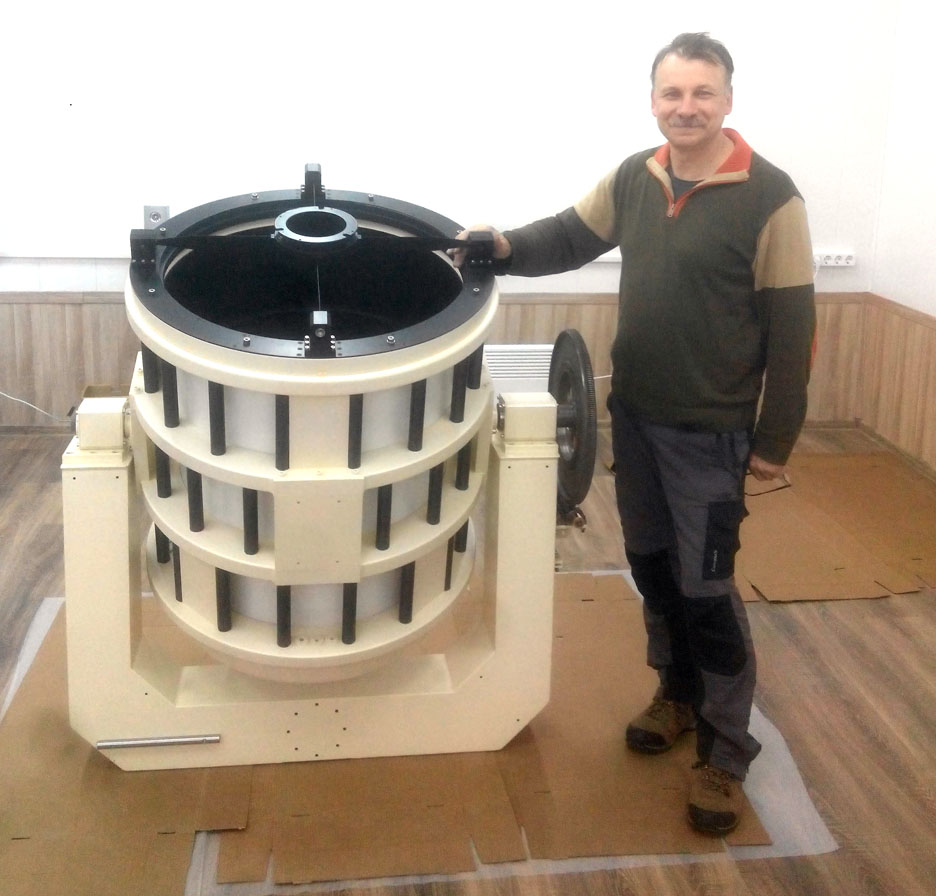 Gennady Borisov with the 0.65-meter telescope he built and used to discover the new comet. G. Borisov

I don't have enough room in the comments for this, so I'm writing here, although it's probably not a true answer since I know nothing about that particular telescope.

Anyway, if you look at many SCT systems, and their derivatives such as Ritchey-Chretien, Dall-Kirkham, etc, the distance between primary and secondary is often not too big.

Also keep in mind that there must be a gap between the edge of the primary and the inner surface of the OTA, so the primary is smaller than the visual estimate of the hole.

We also don't see the bottom of the instrument, so we don't know how far the primary mirror cell is protruding out the back of the instrument - though that's limited by the mount's big fork.

Also, look at a small SCT, such as the Celestron EdgeHD8 OTA. Visually, the tube seems a bit longer, compared to its diameter. However, the EdgeHD is a much smaller instrument. The relative amount "wasted" at the bottom by the primary cell is different. Also, the secondary is "buried" into the OTA, whereas the 0.65m scope has its secondary sticking out of the OTA.

Anyway, this is a bunch of handwaving based on visual estimates. It is possible that this is a system with a primary somewhat more strongly curved than usual.

Not the answer you're looking for? Browse other questions tagged telescope amateur-observing telescope-making mirror-making or ask your own question.

8
How is it ensured that a parabolic shape forms while polishing a telescope mirror?
1
What exactly is a Hamiltonian telescope? Is this one?

10
Why does squinting make hard-to-see objects clearer?
4
How to make a telescope for viewing planets, moon and DSOs using a convex lens of aperture 100 mm and focal length 200 mm and other lenses at home?
1
What telescope is this, and how does it work?
3
How does this telescope work, and what is it for?
7
Where exactly is the modification that first corrected the spherical aberration in Hubble's primary mirror?
5
How would a Fast Fourier Transform Telescope work without a mirror, dish or lenses?
1
How to install the Barlow lens on this telescope?
0
How to make a 65 cm lens with a 20 cm hole in it for a Hamiltonian telescope?
10
Why can't we build a huge stationary optical telescope inside a depression similar to the FAST?